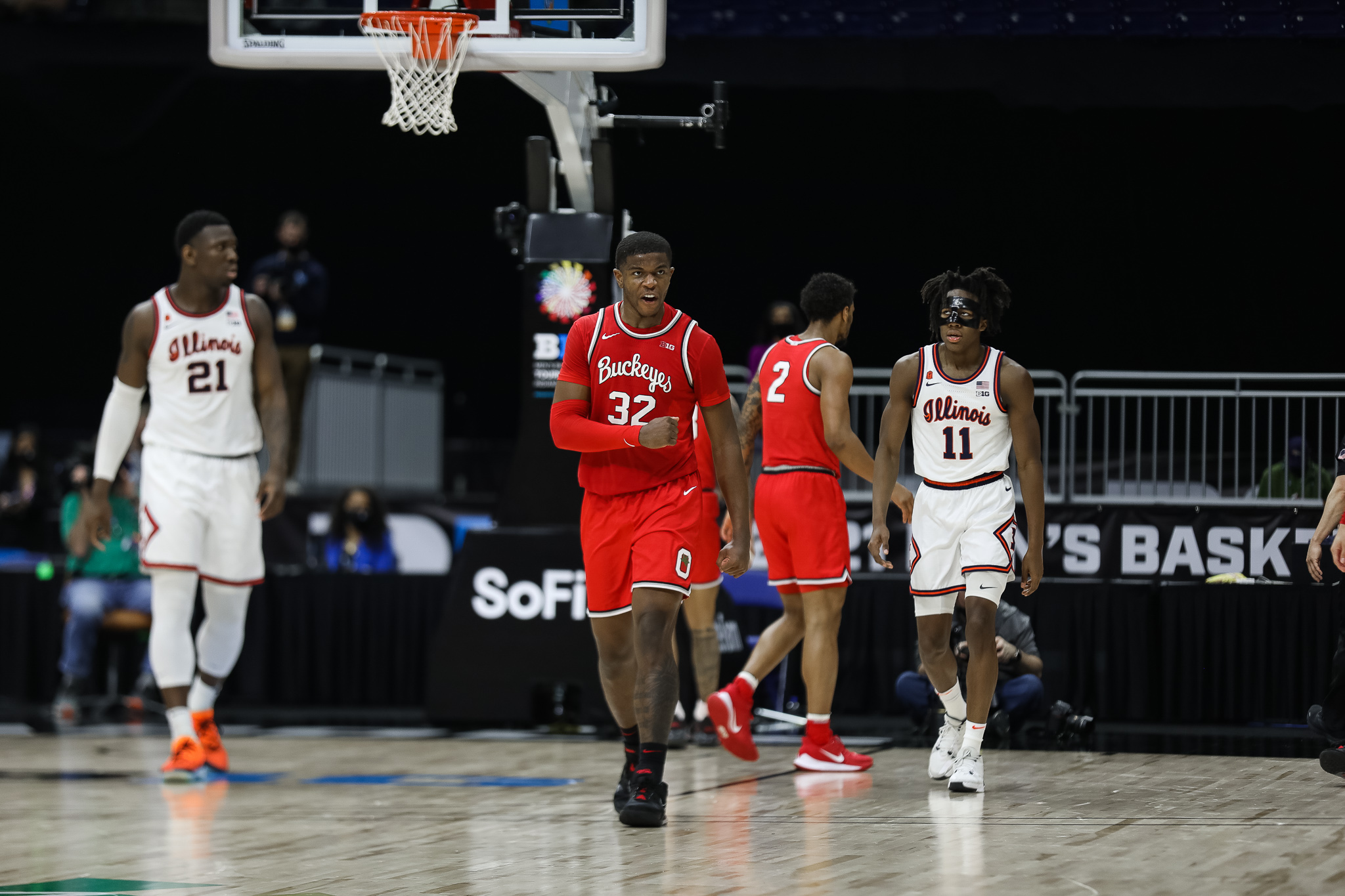 The series between Ohio State and Illinois on the hardwood has been defined since its inception by runs of dominance. Unlike in many of Ohio State’s Big Ten rivalries, periods of even basketball with back-and-forth results are few and far between here. One team is very good, and over a period of years, it routinely romps the other. Since their first matchup on Jan. 7, 1950, this series has seen 10 runs of at least five wins in a row for one team (six for Ohio State, four for Illinois), with a pair of runs that extended into double digits (both in Illinois’ favor).

It fluctuates within eras, too. Illinois won 15 of the first 18 matchups from the 1949-50 season to the 1958-59 season, owning the entirety of the 1950s. But Ohio State answered, winning the first five matchups of the 1960s, seven of the first eight and taking control of the decade overall, 11-5.

The 1970s is one of the few relatively even periods in the rivalry. The two traded results for the first nine games of the decade before Illinois finally claimed a second straight win in the 1974-75 season. Ohio State wrapped the 70s with five straight wins to take it, 10-8.

That momentum carried into the 1980s, though it soured quickly. Ohio State won four of the first six matchups in the 80s, sweeping the 1979-80 and 1981-82 seasons, but couldn’t keep up as the Lou Henson era really took off in Champaign, yielding seven tournament bids in as many years to close the decade. As the Illini battled for national prominence, they rarely struggled against the late stages of Eldon Miller and the brief Gary Williams tenure. Illinois won 12 of the next 14 to close out the decade with a 14-6 record.

Ohio State broke through briefly in the 90s under Randy Ayers, winning five straight after Illinois took the first matchup of the era, but faltered after the departure of Jimmy Jackson as Ayers saw his tenure crumble. Illinois won the next 11 battles between the two before Ohio State’s 1998-99 Final Four team finally broke through – although the Fighting Illini still got the best of that group once and finished the decade with a 13-6 edge over the Buckeyes.

The 2000s, like the 1980s, didn’t see a truly dominant force emerge. Each program produced excellent teams and found success in individual years – the 2000s saw seven season sweeps, albeit with two one-matchup seasons interspersed – but neither reigned supreme on the final scoreboard, tying with nine wins apiece for the decade. Average score? Ohio State- 66.8, Illinois – 68.1.

In other words? A golden era for the rivalry, with six games decided by only one possession, four matchups that saw both teams ranked and a quartet of upsets for the Buckeyes. The largest, of course, came in Thad Matta’s first season at the helm and offered a defining victory for the early stages of his tenure, as a last-second Matt Sylvester 3-pointer unseated the top-ranked Illini, 65-64. Jim O’Brien secured a trio of major upsets as well, though his are a bit less recognizable. In 2001, Ohio State’s Brian Brown rattled off 18 points, Ken Johnson pitched in 16 and the unranked Buckeyes upended No. 3 Illinois.

A year later, twice the lower-ranked team, Ohio State knocked off Illinois, beating it by 11 points in the regular season and then again by six points in the Big Ten tournament semifinals on the way to a league title.

The 2010s were among the best decades for the Buckeyes against Illinois as the Fighting Illini struggled to find a long-term solution at coach following Bruce Weber’s departure. Ohio State won the first five meetings between the two, dropped one game each in 2011-12 and 2012-13, and then rattled off six more wins before Illinois finally got back on the board in 2016-17. Ohio State grabbed two more wins before Illinois closed the decade on top in 2018-19, though that did little to dent a 14-4 record for OSU on the decade.

Now, keeping with the pattern of every other decade, the 2020s have opened with a bang. Ohio State and Illinois have split the first four matchups to begin the decade, with the Buckeyes snagging wins in 2019-20 and the first matchup of 2020-21 in Champaign, though Illinois fought back to grab a road win of its own a season ago before knotting the record with an overtime victory in the Big Ten title game. All four have been ranked-on-ranked meetings (two with both teams in the top 10).

Tonight’s matchup, the only scheduled battle of the season between the two, is no different. The Buckeyes enter at No. 22, Illinois at No. 15, with both hoping to carve out better positioning in this season’s Big Ten tournament with a victory while claiming the edge in the rivalry early in this new decade.