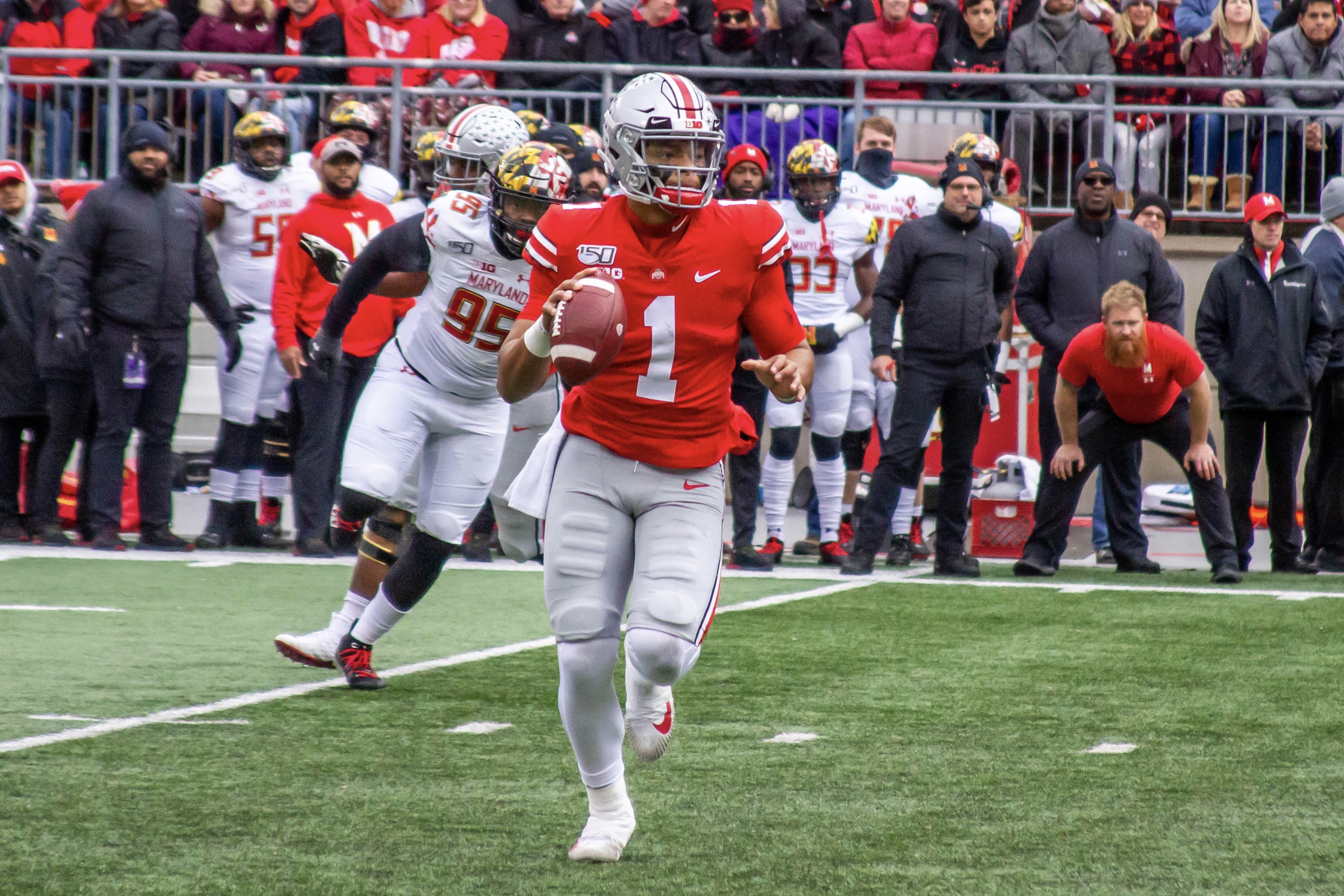 Even though Ohio State’s game against Maryland was cancelled due to a coronavirus outbreak within the Terrapins’ program, the staff of Buckeye Sports Bulletin — which includes Wyatt Crosher, Joe Dempsey, Andrew Lind and Patrick Mayhorn — thought it would be fun to share their predictions for what would have happened on Saturday afternoon.

WC: “I enjoy the concept of writing a prediction for a game that isn’t happening, because that means no matter what, I can’t be wrong!

“Seriously though, I am sad that we don’t get to see play out because I was extremely curious to see how Ohio State’s defense dealt with Maryland quarterback Taulia Tagovailoa, and I thought that this had a chance to be a shootout.

“What I did not think was in doubt was who would win this game, as Maryland’s defense is just simply not good enough to stop Justin Fields from doing what he had done in each of the first three games. I expected him to again break out for a 300-yard performance and again do it with remarkable efficiency.

“Ohio State was going to win this game, but I thought it had the chance to be a little close because of Maryland’s offense, and I wish we would have seen it all play out, as no one expected that this game would be any sorts of fun before the season started.

JD: “Maryland would have been in trouble had Ohio State arrived in College Park for the scheduled matchup. Although they were coming off a two-game winning streak, the Terrapins were in trouble if they had to take on the Buckeyes.

“The Scarlet and Gray have struggled a bit in the running game, but they still gain 208.7 rushing yards per game. I expected Master Teague to exceed his 111-yard rushing outing against Maryland from last season against a Terrapin defense that allows 227.0 yards per game on the ground.

“I was most curious to see how the Buckeye defense would fare against Alabama transfer Taulia Tagovailoa and the Terrapin offense. I expected Maryland to put up some points, but the match would never be in doubt for Ohio State.”

AL: “While Ohio State’s defense allowed 24 points and several trick plays in the second half of last week’s 49-27 win over Rutgers, I wasn’t overly concerned about the sloppiness because they thoroughly dominated the first half. It’s difficult to keep that same energy after halftime when the game is out of reach and you’re playing in an empty stadium. It’s essentially going through the motions and running at the clock at that point.

“With that said, I think Maryland would have been a measuring-stick game for the defense. It wouldn’t have been a close game given how many weapons Ohio State has on offense, but the Terrapins have shown the ability to score points in wins over Minnesota and Penn State. Taulia Tagovailoa is the best quarterback Maryland has had in years and perhaps the second-best quarterback the Buckeyes would have faced this year, as well.

“While some may have expected an offensive shootout like the last time Ohio State traveled to College Park, I expected Tagovailoa to make some first-year mistakes against the most talented defense he would have faced, too, throwing a pair of second-half interceptions in the red zone (including one to Shaun Wade) that allows this game to get out of hand.”

PM: “I’ll admit, I was actually pretty interested in this one, given the way that Maryland played against Minnesota and then against Penn State. Obviously we still don’t know a ton about those teams, but I do think that Maryland can compete and it certainly has some interesting pieces.

“Because I’ve that, I’m disappointed we won’t get to see the Terps face off with the Buckeyes. Ohio State has yet to play a decent passing attack and Maryland has that, so it likely would have presented an interesting test for the maligned Buckeye defensive backfield. I don’t think that Maryland would’ve won this game, primarily because Ohio State likely scores at will on that defense, but it still would’ve been a valuable data point.”