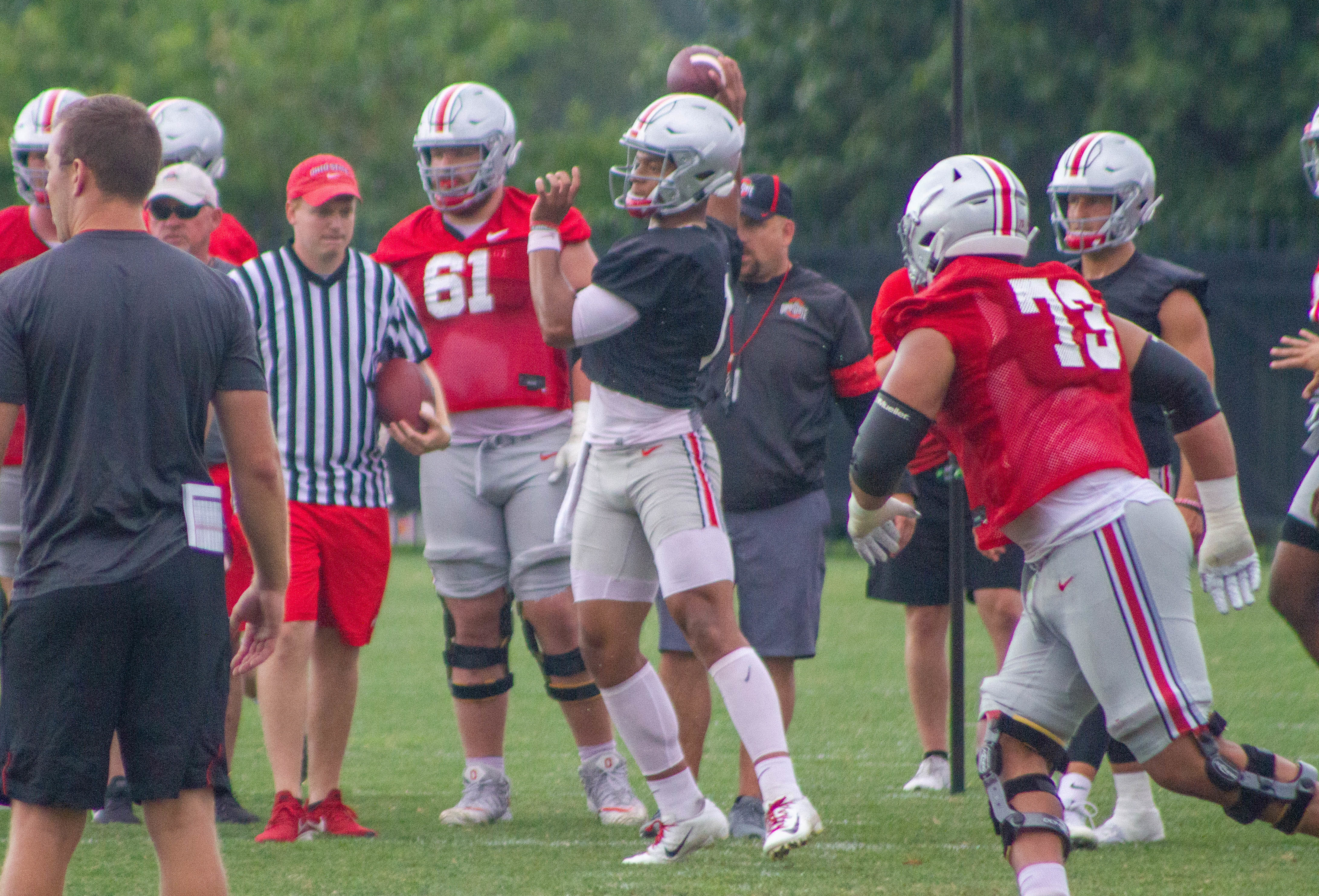 Ohio State opens its 2019 season on Saturday afternoon against Florida Atlantic (12 p.m. on FOX). The Buckeyes are a 27.5-point favorite over the Owls, who are led by former Oakland Raiders, Tennessee Volunteers and USC Trojans head coach Lane Kiffin.

Kiffin acknowledged FAU is at a significant disadvantage in the game and admitted the Owls are only playing for the money — the payout from Ohio State is $1.4 million. So it should be no surprised then that the staff of Buckeye Sports Bulletin, which includes Wyatt Crosher, Joe Dempsey, Andrew Lind and Patrick Mayhorn, expects this to be a blowout in favor of the Buckeyes.

WC: Florida Atlantic was a high-powered offensive team that never figured it out on the defensive side in 2018. If that remains true, it may be the perfect game for Justin Fields to have for his first collegiate start.

Fields will get the opportunity to make some big plays against the Owls, even if their defensive has slightly improved from a year ago, while Lane Kiffin and his team can find enough plays on the offense to keep things interesting, at least throughout the first half.

Some growing pains may occur in the first quarter, but expect some big numbers from Fields and J.K. Dobbins, but not enough to take them out at half.

I’m expecting 2 ½ to three quarters of Fields action before the subs come in, and that should be enough for Fields to have around 300 all-purpose yards on the day. Ohio State should never feel legitimately threatened by Florida Atlantic from start to finish, and while the Buckeyes may give up some points on defense, nothing should signal any red flags just yet.

In Day’s first game as full-time head coach, he should be able to manage a comfortable win that can tell him some things about his new starting quarterback, as well as his defense.

JD: The first game of Justin Fields’ Heisman campaign will be a comfortable win and put the sophomore transfer from Georgia on a lot of radars across the country.

While much has been made of Ohio State losing four full-time starters to the offensive line, the front five will not be an issue. Thayer Munford, Wyatt Davis, Jonah Jackson and Branden Bowen have all started at the FBS level and Josh Myers is ready to thrive at center.

J.K. Dobbins will break off a couple of big plays, reminding fans of his phenomenal freshman season in 2017.

Despite all the talent Ohio State had to replace on offense, the defense will be the main concern against Florida Atlantic.

Another Owl receiving threat to worry about is junior slot receiver Willie Wright, who hauled in 46 receptions for 452 yards and two touchdowns last year. The 5-foot-8, 160-pounder is elusive in the open field, also adding 15 carries for 71 yards and 10 punt returns for 66 yards as a sophomore.

The Ohio State secondary will be put to the test in the first game for co-defensive coordinators Greg Mattison and Jeff Hafley, and Brendon White in the new ‘Bullet’ position will be critical to stopping FAU’s offensive attack.

The wealth of talent for the Scarlet and Gray will be too much to match for FAU, with the Buckeyes going up multiple scores in the first half.

AL: All eyes will be on first-year starting quarterback Justin Fields, but I don’t think Ohio State will ask him to do too much in his debut. The staff is instead more likely to try and get him comfortable with running a very complex offensive system and familiar with his receivers and running backs.

I fully expect him to flash a couple times, though, particularly with his legs if a play breaks down along the offensive line — which it will at one point or another, given the Buckeyes are breaking in a host of new starters.

But ultimately, I think he’ll throw a couple of touchdown passes and run for one more before being pulled midway through the third quarter. Games like these are just as important for backups, especially when Ohio State doesn’t have an established second-string quarterback. The third and fourth quarters will be a battle between Chris Chugunov and Gunnar Hoak as a result.

A game like this will be big for running back J.K. Dobbins, who hopes to get into an early season groove and put the “failures” of last year behind him. He’ll easily surpass 150 yards and two touchdowns on the ground, while the Buckeyes will cruise to victory behind a revamped defensive unit that will hold Florida Atlantic to a season-low output.

PM: No matter what Ohio State’s players and coaches say, Lane Kiffin is not, in fact, “one of the greats in college football.” As he has shown in years past, he’s a good, not great offensive mind, with a propensity for wild fluctuations in his team’s ability, based either on his level of quarterback play or on whatever he feels like putting on the field last year.

After a 5-7 campaign, FAU looks primed for a bounce-back season, but it looked primed for a Conference-USA run last year, too. That obviously didn’t happen, because FAU is tremendously difficult to predict.

Luckily, this is not a full season prediction for the Owls, who could go anywhere from 10-2 to 4-8. Single games are much easier  to predict for FAU, because the majority of the prediction can come right from individual matchups, and Ohio State wins the individual matchups in Saturday’s opener.

FAU finds the end zone on its scripted first drive, but Ohio State clamps down, runs right into the weak middle of the Owl defense, and pulls away early in the third quarter. Justin Fields is good, not great, and both J.K. Dobbins and Demario McCall star on the way to a 48-14 Buckeye win.