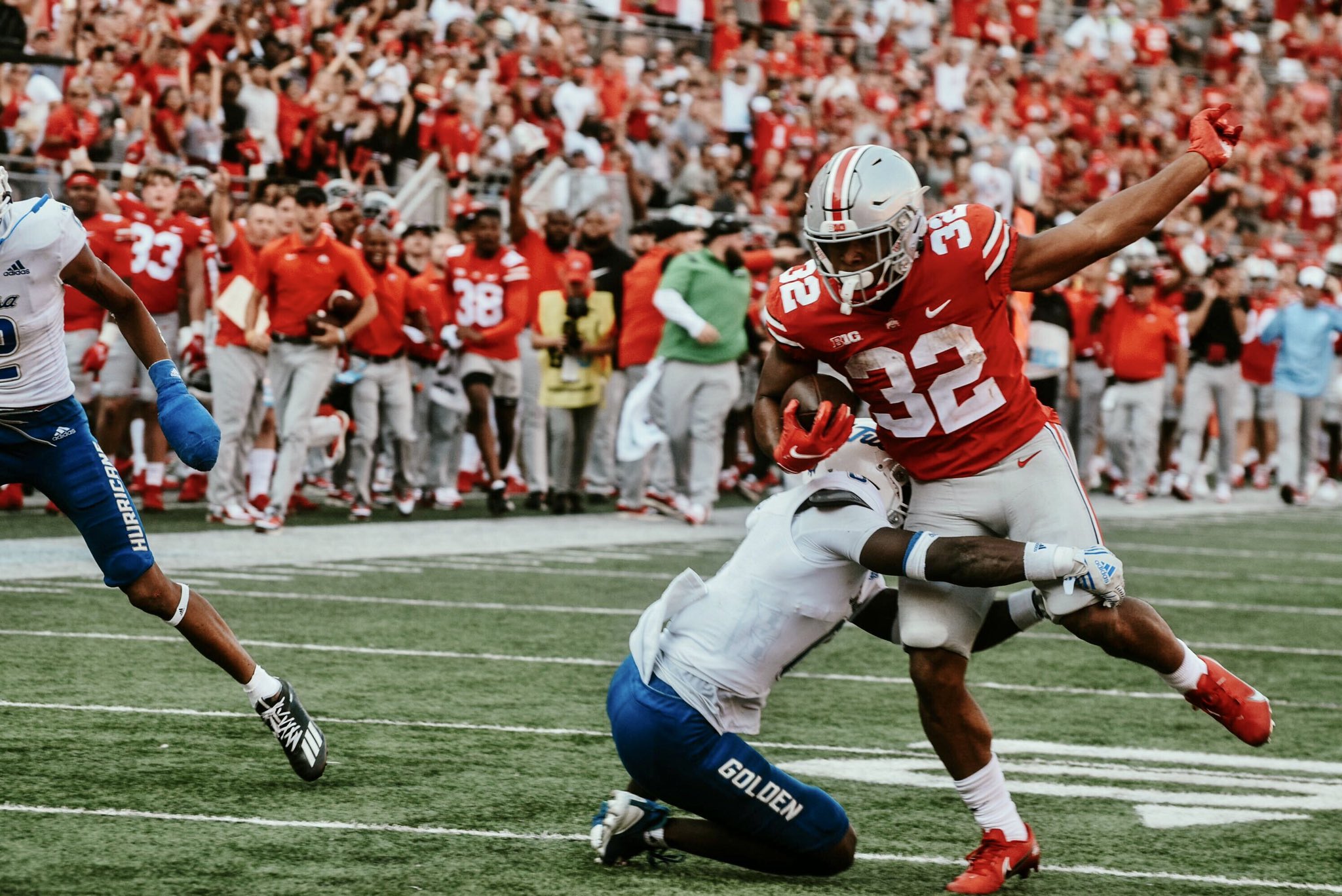 TreVeyon Henderson carried the ball 24 times for 277 yards and three touchdowns. That’s enough for me to give him the Buckeye Leaf. However, that’s not the headline. He broke the freshman single-game rushing records against the Golden Hurricane, topping Archie Griffin’s 239-yard performance against North Carolina in 1972. That’s not all – Henderson’s performance puts him at No. 3 on the all-time single-game rushing record behind Trey Sermon and Eddie George.

Sermon rushed for 331 yards against Northwestern in the 2020 Big Ten Championship against Northwestern. George collected 314 against Illinois back in 1995. Henderson’s 277 yards put him behind the two Ohio State running backs and firmly in front of another Buckeye great, Ezekiel Elliot.

It looks like we could have another all-time running back blossoming in front of our eyes.

There is only one real pick for a Buckeye leaf in Ohio State’s win over Tulsa, and that is TreVeyon Henderson.

Henderson was the only thing that felt alive for the Buckeyes on either side of the ball, and he may be the only reason that Ohio State avoided a monumental upset against the Golden Hurricanes. The freshman running back carried the ball 24 times for 277 yards and three scores, breaking the freshman rushing record set by Archie Griffin in 1972.

This was a bad game all-around for Ryan Day’s team, but Henderson masked that with true brilliance on each of his touchdown runs. He should be the no-doubt starter from here on out for the Buckeyes and could be the difference in snapping out of this lull that Ohio State has been in through three games of the 2021 season.

As my coworkers have, I’m selecting the talented halfback from Hopewell, Va., for my Buckeye Leaf this week. We’re going to have to make more room on his helmet.

It’s hard to find a starting place when talking about this young man because watching him play really just takes your breath away. He’s as fast as any Buckeye back of the modern era, and he has the instincts of a 10-year NFL veteran. The way that he reads defensive flow and cuts against it is just brilliant.

And it was on full display Saturday, as the afternoon turned to evening in what was otherwise a snoozer for the Buckeyes against a feisty but overwhelmed Tulsa team. Henderson was just about the only draw, breaking away for nearly 300 yards and busting big run after big run with a style that seems almost agnostic to blockers or defenders. The Buckeye back is a delight.

After careful consideration, I am awarding a helmet full of Buckeye leaves to TreVeyon Henderson. One leaf for his 173 yards and two touchdowns in the third quarter alone, one more for breaking Archie Griffin’s 39-year-old freshman record for most rushing yards by an Ohio State freshman, and a whole handful for being diplomatic when asked if he had ever met Griffin or watched tape of the two-time Heisman winner.

Henderson said he had never met Griffin but had watched him on tape. Then when asked what he admired about Griffin, Henderson paused, smiled and said, “I know he was a great player.”