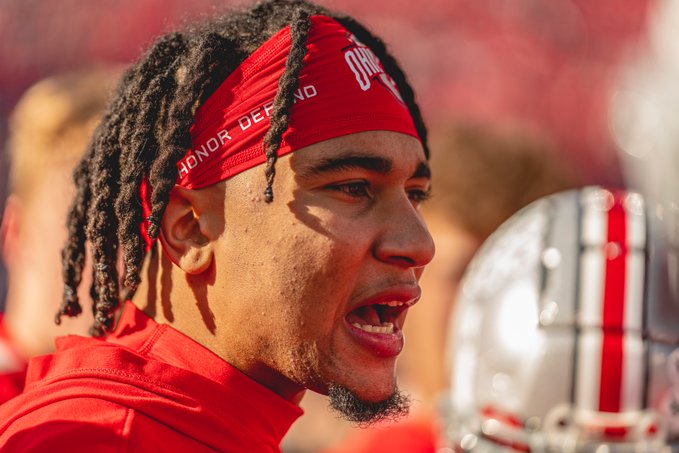 Andy Anders, BSB: My Buckeye Leaf goes to Chip Trayanum, who stepped in at running back and had a solid game with an injury to TreVeyon Henderson and Miyan Williams clearly being limited.

Trayanum picked up 83 yards on 14 carries, an average of 5.9 per tote in a losing effort. His long run of the day was 24 yards, as he gained much of his yardage in chunks. Trayanum, the fifth or possibly sixth running back on OSU’s depth chart entering the season, filled in admirably.

Jack Emerson, BSB: On a day that not many Ohio State players are deserving of recognition, kicker Noah Ruggles was steady in the kicking game for the Buckeyes.

Ruggles drilled a trio of kicks, including a long of 47, to give Ohio State a puncher’s chance against the Wolverines. His 27-yarder with 7:23 to go in the fourth quarter put the Buckeyes within one possession, however the Wolverines scored a 75-yard rushing touchdown on the very next play to put the game out of reach.

Braden Moles, BSB: Well, someone has to get a Buckeye Leaf. I’ll go with C.J. Stroud, who even in the loss finished 31 of 48 for 349 yards and two touchdowns, with both of his interceptions going off the hands of a receiver.

It speaks to a bigger issue in the loss to the Wolverines in which Ohio State’s receivers offered little in the way of help to Stroud, who was one of the few Buckeyes that showed some fight. Instead, he’ll leave Ohio State with two losses to Michigan.