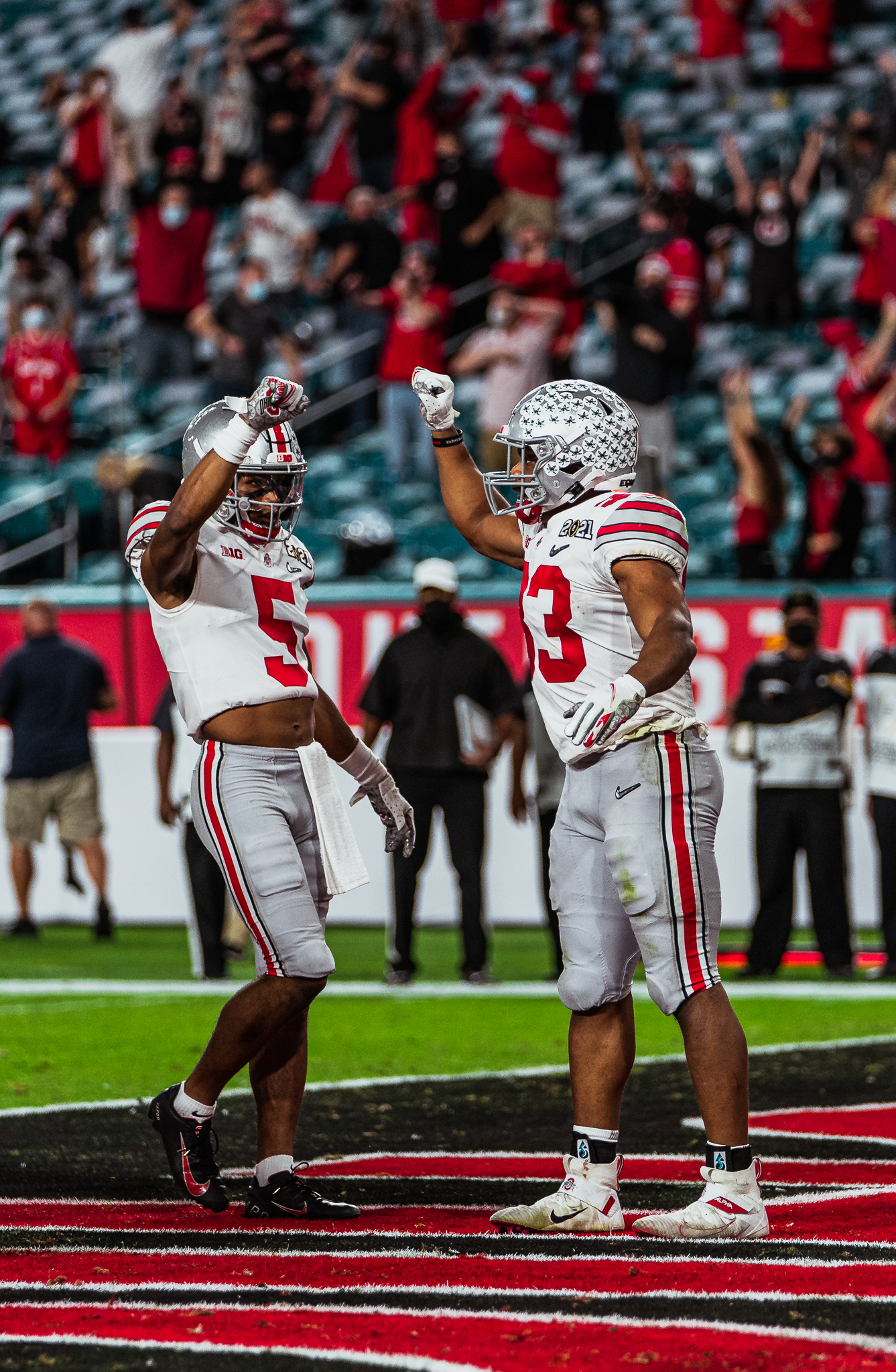 Ohio State ran into a dominant Alabama squad and lost for the first time all season, falling 52-24 in the College Football Playoff national championship game Jan. 11.

Despite the disappointing 28-point loss for the Buckeyes, there were a few players who stood out in scarlet and gray, and the BSB staff members awarded them with Buckeye leaves.

“There isn’t really anyone I thought that deserved a Buckeye leaf after that blowout loss, but I will give it to Garrett Wilson for the touchdown catch. No one on either side of the ball really impressed me, so Wilson’s nice 20-yard grab on a three-catch, 50-yard night will be enough for me to give it to him.

“I would also like to honor players like Justin Hilliard and Jonathon Cooper, not necessarily for their performances, but because they are two players who were major leaders for this team and who decided to come back and play this season out. Hilliard was a revelation this season after countless injuries, and Cooper played some of his best football, so kudos to them on two great seasons.”

“It is difficult to dole out any awards to Ohio State after a 28-point loss on the biggest stage, but there were certainly individual players deserving of praise.

“Baron Browning stood out to me for making one of the few plays that could have changed the game in the Buckeyes’ favor. The senior linebacker sacked Mac Jones for a 6-yard loss on first-and-10 from the Alabama 24-yard line, stripped the ball and recovered it to set up a game-tying touchdown early in the second quarter.

“Chris Olave, a junior wide receiver, was underutilized but not by his own fault, hauling in eight of his nine targets for 69 yards. He also snagged an apparent touchdown in the fourth quarter that was ruled incomplete.

“Another player who performed well in the blowout loss was fifth-year senior punter Drue Chrisman, who placed two of his five punts inside the 20-yard line and averaged 42.8 yards per punt.”

“When senior running back Trey Sermon went down with an apparent collarbone injury on Ohio State’s first offensive possession of the game, you could feel the air come out of the Buckeyes’ sails.

“Sermon had been on a tear of late, rushing for 524 yards and three scores in wins over Northwestern and Clemson. If Ohio State was going to have a chance against Alabama, he needed to be at his best once again. It just wasn’t meant to be, though, and he finished the game with one carry for 2 yards and a trip to the hospital.

“Sophomore Master Teague filled in admirably, scoring a pair of first-half touchdowns to knot the game at 14-all early in the second quarter. And while he ultimately wasn’t able to provide the same game-breaking runs that made Ohio State’s offense so potent late in the season, he deserves credit for stepping up when unexpectedly called upon.”

“It’s hard to find a whole lot to praise about Ohio State’s blowout defeat against Alabama in the College Football Playoff national championship. The Buckeyes were beaten comprehensively on both sides of the football by a significantly better team, ending any hopes for another magical Buckeye playoff run sparked by the sudden emergence of an elite running back. The 2014 Buckeyes this team is not.

“However, in the face of a performance like this, there are still Buckeye leaves to be doled out, and I think that mine is going to be more of a legacy award than anything else. He didn’t play especially well in this game without a strong rushing attack to keep the Buckeye offense on schedule, but quarterback Justin Fields gets the nod from me in what will certainly be his final game in the scarlet and gray.

“His career will be a bizarre one to look back on. Probably the best statistical output from any quarterback in school history, and some moments of true dominance will paint Fields’ time in Columbus, but so too will a distinct lack of hardware. The all-world quarterback prospect leaves Ohio State without a Heisman trophy, without a national title, and without ever really looking like the best quarterback in the nation, as he was expected to be. A large part of that is due to the presence of Trevor Lawrence, who seems inextricably and permanently tied to Fields, but the sense of missed opportunity is certainly still there.

“However, it’s very easy to make the case that Fields is the best quarterback Ohio State has ever seen. His best was completely untouchable, and even his worst was more than enough to guide the Buckeyes to an excellent two-year stretch, featuring a pair of Big Ten titles, a pair of playoff berths and 20 wins – including a revenge victory against Clemson in the 2020 playoffs – to just two losses. Those losses will haunt him and Ohio State, certainly, but the importance of opening the Ryan Day era with such a talent cannot be overstated. Fields didn’t bring his best in his final college game, but his career, while complicated, deserves a legacy sticker.”