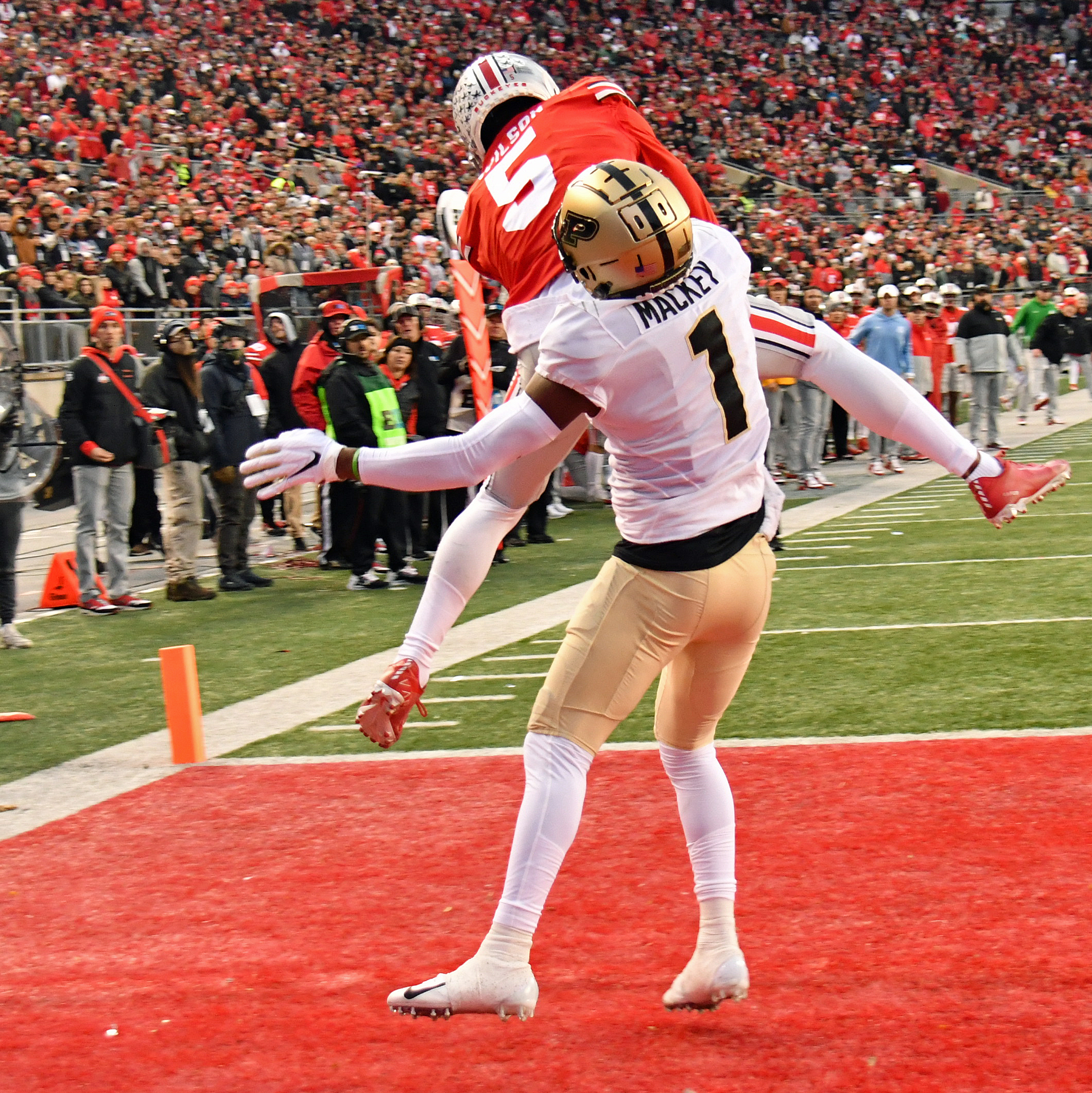 Chase Brown, BSB: Before the season started, Chris Olave seemed to be a lock as the best wide receiver in the country. However, Garrett Wilson and Jaxon Smith-Njigba outshined him through the first nine games, causing the senior wideout to take a backseat in the Ohio State offense.

It’s not that Olave played poorly in those contests – that’s not the claim I am trying to make – it’s just that the other wide receivers got open, Stroud connected with them, and they collected impressive statistics.

Wilson took the lead in Saturday night’s game with 10 catches, 126 yards, and three touchdowns. Smith-Njigba made his mark with nine receptions, 136 yards and a score, while Olave caught nine passes for 85 yards and a touchdown.

It was encouraging progress from Olave, who looked displeased with his lack of involvement in the offense in recent weeks. He moved within one score of tying David Boston for the most career-receiving touchdowns in Ohio State history. With two regular-season games remaining, Olave is a lock for at least tying and probably breaking the record Boston set in 1998.

Patrick Mayhorn, BSB: Ohio State’s offense desperately missed Garrett Wilson a week ago, and in case the two touchdowns that it was able to account for without him weren’t enough proof, Wilson’s return to the field against Purdue had to have been. The junior wideout was unguardable for the Buckeyes, cashing in on a career-high four touchdowns including three through the air and another on a lengthy jet sweep scamper through the Boilermakers defense.

This offense just flows differently when he’s on the field. He opens up the underneath routes for Jaxon Smith-Njigba and pulls the top cornerback away from Chris Olave, while still finding separation against that top competition and reeling in highlight-worthy catches. He gets yet another sticker to add to his collection.

Mark Rea, BSB: Lots of Buckeye leaves to go around on the offense, but I’ll give mine to quarterback C.J. Stroud. The redshirt freshman continues to operate Ryan Day’s offense like a veteran and was much more receptive to taking what Purdue gave him rather than forcing the issue as he did several times last week against Nebraska. Stroud led the Buckeyes to eight touchdowns before taking a seat late in the fourth quarter, and in the process, topped the 300-yard mark (again) and threw five touchdown passes (again).