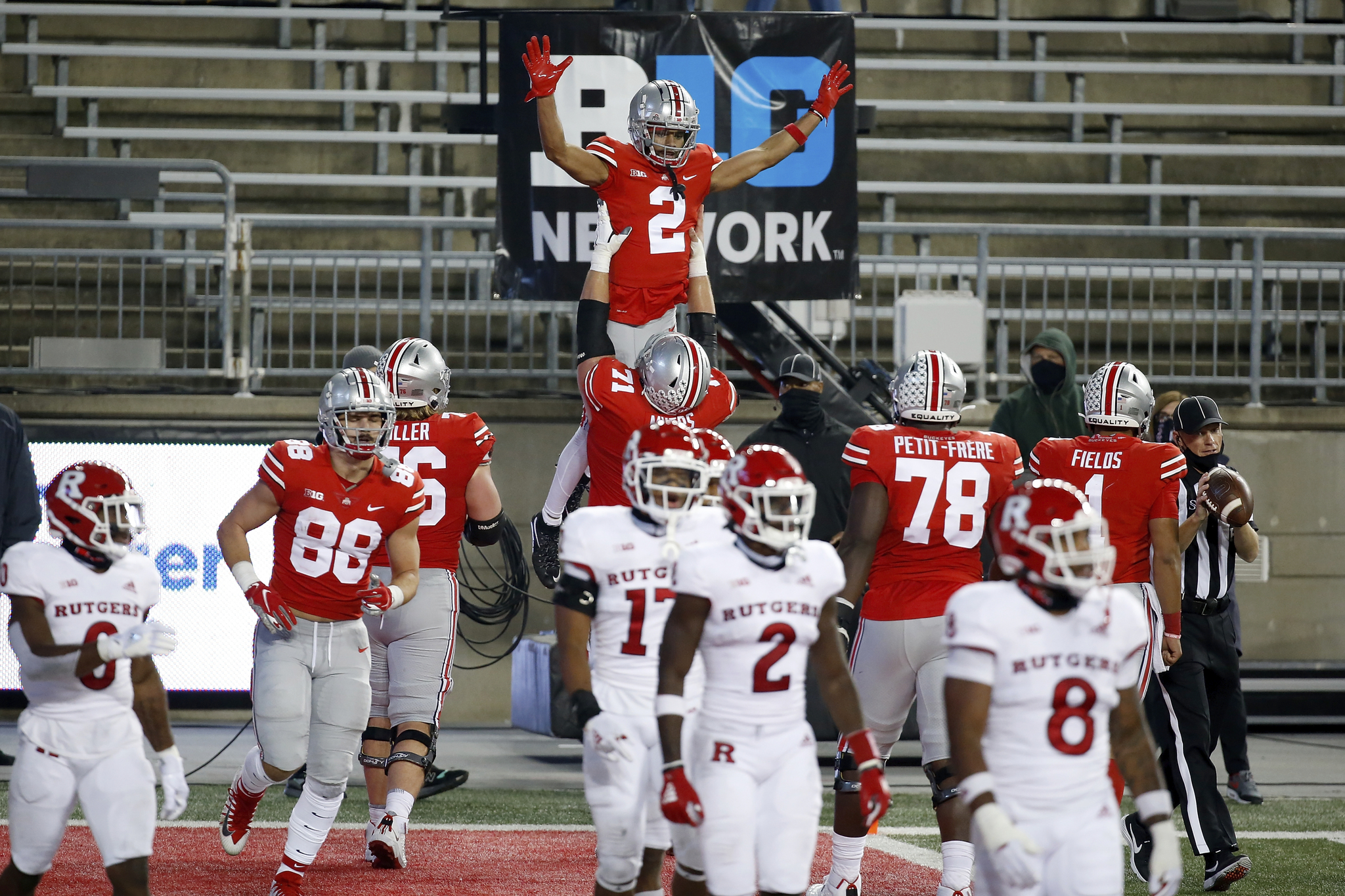 Ohio State jumped out to a 35-3 halftime lead against Rutgers before bumbling to a 49-27 victory at Ohio Stadium. Despite the lackluster second half, many Buckeyes stood out and proved worthy of earning Buckeye Leaves from our BSB staff.

There were certainly some areas that Ohio State will be looking to improve heading into next week’s game against Maryland, but the pass game stayed as strong as it has all season.

A lot of that has to do with how impressive the top receiving duo of Chris Olave and Garrett Wilson has been, with Olave specifically impressing me as a continued threat to find his way into the end zone.

Olave finished the game with five catches on five targets for 62 yards, a strong outing, but what made it stand out was that quarterback Justin Fields found him twice for touchdowns.

The junior receiver is now up to four touchdowns on the year and continues to be a problem for opposing defenses both in the red zone and as a deep threat.

One of the brightest spots of Ohio State’s ugly 49-27 victory over Rutgers was the play of Garrett Wilson. The standout sophomore became the fourth player in Ohio State history to reach the 100-yard receiving mark for three consecutive games with a 104-yard outing.

Wilson reeled in six of his seven targets for 104 yards and one touchdown, adding five yards on one carry. The former five-star recruit continued to provide Justin Fields with a reliable target to move the chains, converting four first downs for the Buckeyes.

Averaging 17.3 yards per catch, Wilson gave the Scarlet Knights issues regardless of which route he was running. The well-rounded receiver also returned one punt for nine yards in a game that was out of reach in the first half.

If needed, Wilson could have torched the Scarlet Knight secondary all night long, but a 25-3 halftime lead led to conservative calls for Ohio State.

While it would be easy to single out one of Ohio State’s many offensive weapons for this exercise, I would be remiss if I didn’t take the opportunity to single out former Buckeyes safety Brendon White, who transferred to Rutgers this offseason and was the Scarlet Knights’ lone captain for the coin toss before the game.

White recorded a modest four tackles and was involved in a forced fumble in the fourth quarter, but his leadership in the secondary was very apparent nevertheless. Rutgers is much improved in head coach Greg Schiano’s return, and he’s getting the most out of his players, including White, who came out of nowhere in 2018 to become the defensive MVP of the Rose Bowl under Schiano’s guidance.

I do believe White could have played a significant role in Ohio State’s young and inexperienced secondary this fall, but I also think he’s finally found a home where his talent will shine through.

Well, that was certainly a college football game! With Ohio State looking as sloppy as it did in its 49-27 victory over Rutgers, it’s hard to find a ton to compliment in the performance, but quarterback Justin Fields certainly deserves a nod – as he does in seemingly every single game. Even without any kind of consistent running game to lean on, Fields has maintained his excellence in all facets of the game and kept that trend up against the Scarlet Knights.

He was just about perfect. He completed 24 of his 28 attempts for 314 yards and five scores, adding one more touchdown on the ground with a quarterback keeper. His connection with Garrett Wilson looks to be one of the best quarterback-wide receiver ties in college football and he’s looking more confident in the pocket with each passing week.

Additionally, while it isn’t a traditional positive, carrying the ball just six times (four without counting sacks) is crucial to Fields’ long-term health. He appears to have a better understanding of the importance of that this season and is tucking the ball only when it is absolutely necessary.