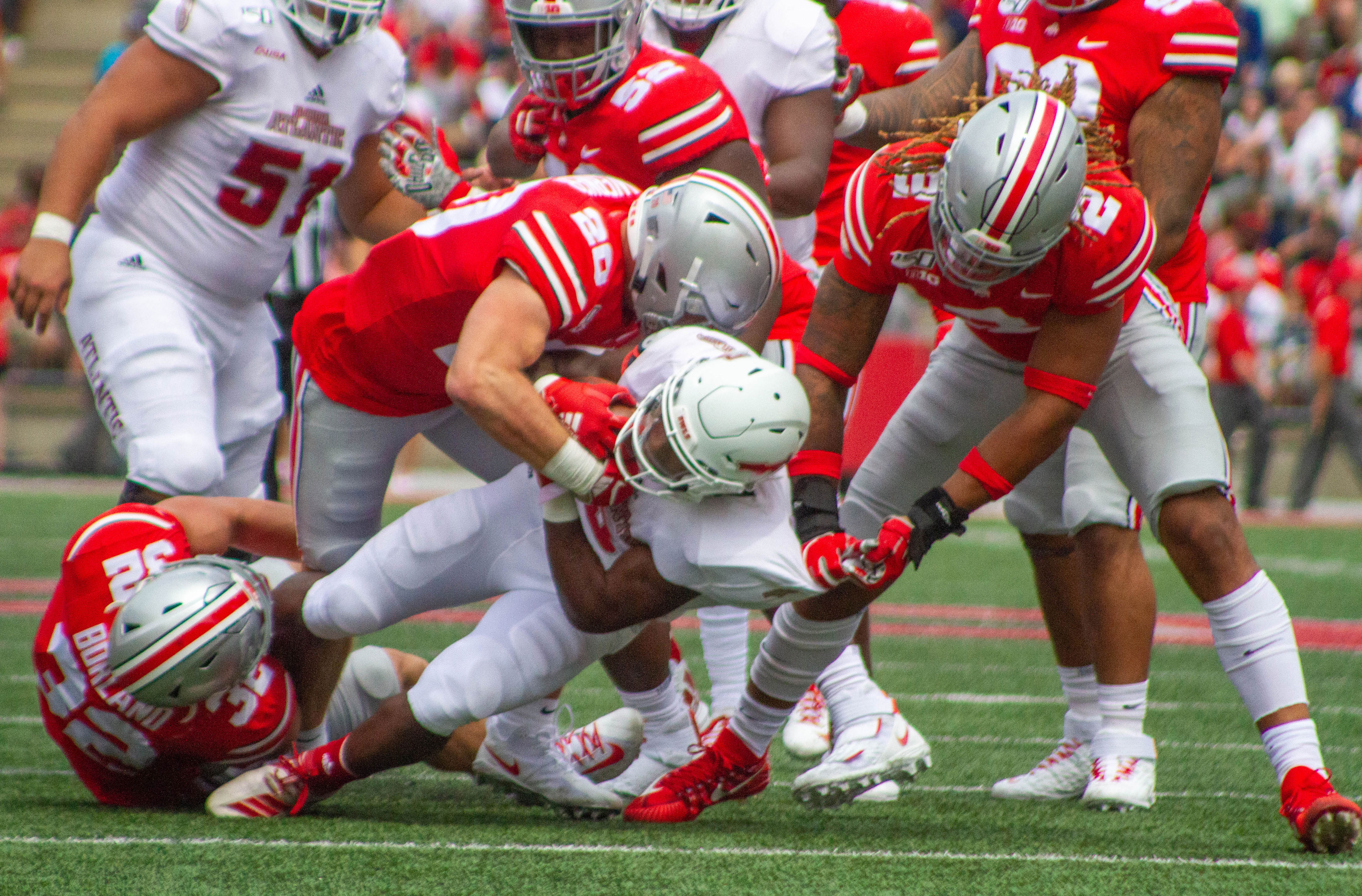 After a red-hot start, Ohio State took its foot off the pedal en route to a 45-21 victory against Florida Atlantic, solidifying a win in Ryan Day’s first game as full-time head coach, and Justin Fields’ first game as a collegiate starter.

The Buckeyes put up 469 yards of total offense, and only allowed 228 yards on the defensive side, but was outscored 21-17 after jumping out to a 28-0 lead within the first 10 minutes of the game.

There were a handful of players who stood out throughout the game, and the BSB staff each picked one to give their Buckeye Leaf to in week one.

While not without some growing pains in the second quarter, and for some of the third, Justin Fields came out in his first career collegiate start and showed why he has been such a highly regarded player.

Fields ended his first start completing 18 of his 25 throws for 234 yards and four touchdowns, while also rushing for 61 yards and 12 carries with a score. Of those, 115 passing yards and 54 rushing yards, as well as four of the touchdowns came in the first quarter. From there, he had some issues getting it going again in the second, but the offensive line did not help him out much, often letting Florida Atlantic defenders through the gaps.

The sophomore quarterback started to turn it around in the third quarter, relying on his mobility more to gain some first downs, while finding Jeremy Ruckert in the endzone for the second time in the game.

His major highlight came on Fields’ first drive, though, where he found a huge hole and exploited it for a 51-yard rushing score.

There are plenty of areas to improve, mainly staying composed in the pocket, but Fields showed what all the excitement was about in week one.

I am giving my Buckeye Leaf to fifth-year senior defensive lineman Jashon Cornell for his performance against Florida Atlantic in the season opener.

With defensive ends Jonathon Cooper, Tyreke Smith and Tyler Friday and defensive tackle Taron Vincent out with injury, Cornell was called upon in a bigger role and delivered.

The St. Paul, Minnesota, native made an impact when he was on the field, recording four tackles (three solo), two tackles for loss, one sack and one forced fumble. Despite moving to three-technique in the offseason, Cornell filled in at defensive end due to injury.

The 6-foot-3, 285-pound defensive lineman did not disappoint, disrupting the Owls passing and rushing attempts frequently, including his strip sack on second-and-12 to close the first quarter.

At 6-6 and 250 pounds, Ruckert will continue to be a matchup problem in the red zone this season. And if he gets enough opportunities, double-digit touchdown receptions does not feel out of the question.

Ruckert will have to battle with Berry and junior Jake Hausmann when the former comes back from the injury, but he should be a prominent part of the offense moving forward.

Not to mention, it was nice to see Ohio State actually get the tight end involved after years claiming it was a priority.

After serving as the lone bright spot at linebacker for Ohio State last season, Malik Harrison started off this season much like he ended last season. The senior linebacker had five tackles on the game, including two for a loss and a sack, but his impact was much larger than his stats indicate.

Harrison served as the enforcer across the middle for much of the game, and kept FAU from finding any traction underneath, both on the ground and on passing routes to tight ends John Raine and Harrison Bryant. Almost all of the Owls’ success came on the outside, and that can be largely attributed to Harrison and his ability to roam in the middle of the field.

Nothing showed this better than his big hit in the third quarter in the Ohio State red zone, when he knocked the ball out of tight end Harrison Bryant’s hands with a vicious breakup.