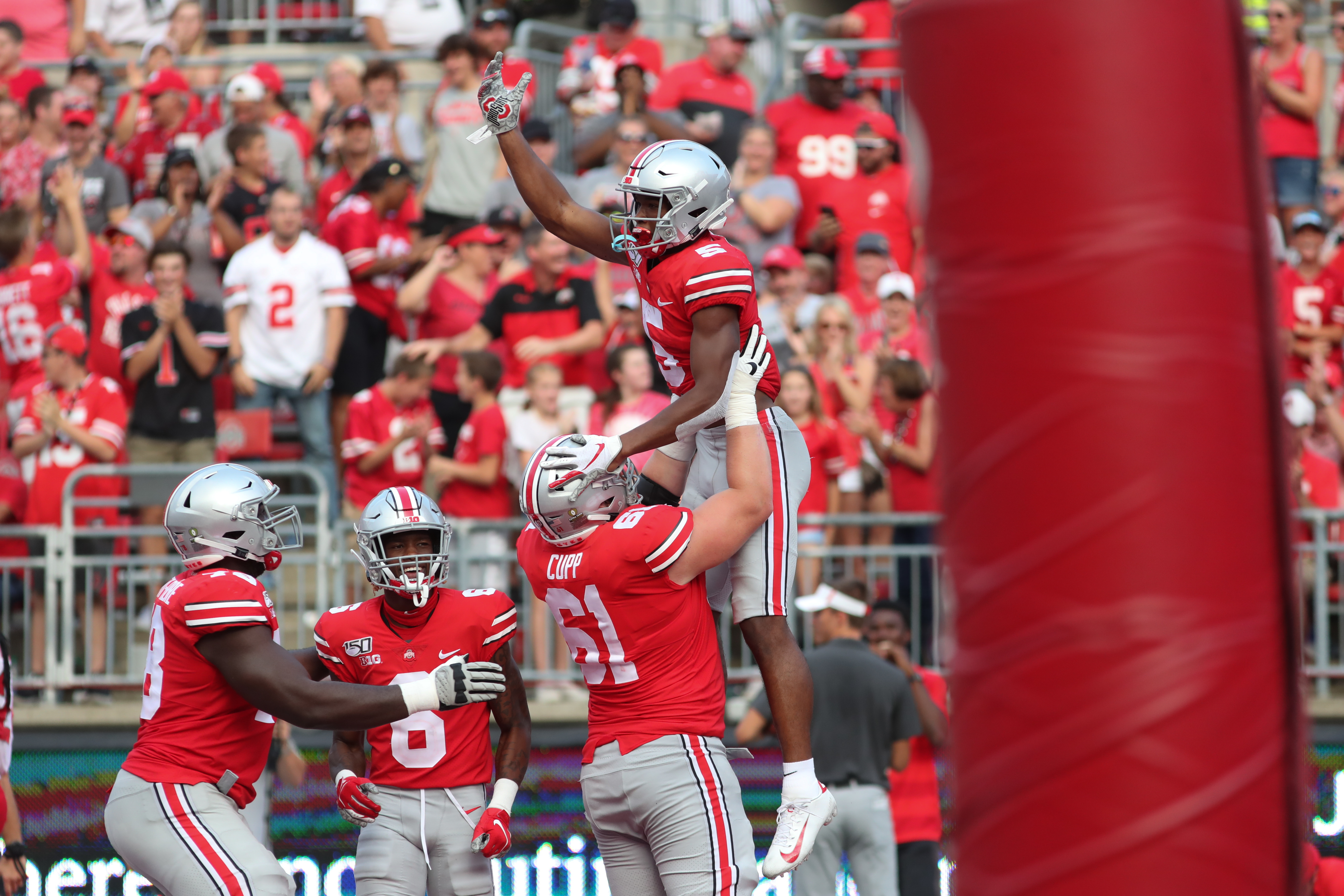 After only slightly regressing in a big win against Indiana, quarterback Justin Fields looked like the struggles may continue, getting stripped for a safety to put Ohio State down 2-0.

But Fields turned it around in a big way, taking part in all six touchdowns Ohio State scored in the second quarter to get the Buckeyes a 49-5 lead at half, which was the time the sophomore quarterback’s day was over. Even in just two quarters, Fields completed 14 of 21 passes for 223 yards and four touchdowns, while also rushing nine times for 36 yards and two touchdowns.

This was the type of game Fields needed to have to regain momentum, and he was more than up to the task.

I am giving my Buckeye leaf to true freshman wide receiver Garrett Wilson for his tremendous performance in Ohio State’s 76-5 win against Miami (Ohio). Wilson helped lead J.K. Dobbins to his 26-yard touchdown in the first quarter. Then, in the third quarter, Wilson took his first career punt return 52 yards all the way to the Miami 12, showcasing speed and elusiveness down the sideline.

With 9:08 left in the third quarter, backup quarterback Chris Chugunov threw a bomb down the far sideline to Wilson, who tipped the ball up to himself, bobbled it to the ground and hauled in a 38-yard touchdown, pushing the Ohio State lead to 56-5 with the ensuing extra point. The former five-star recruit from Lake Travis (Texas) finished the day with four catches for 54 yards and one touchdown.

Okudah’s pick, which occurred on Miami’s first drive of the second quarter, set the Buckeyes up with excellent field position and allowed quarterback Justin Fields to score just three plays later to give the Buckeyes a 21-5 lead.

Adding to that column in the stat sheet has been a long time coming for the South Grand Prairie, Texas, native, who after the game dedicated the play to his late mother. It’s the first step in becoming a first-round pick next spring, too.

Another week, another Buckeye Leaf for star defensive end Chase Young. The junior is up to seven sacks on the season through four games, and looks primed to not just surpass Ohio State’s single season record of 14, but smash it easily.

He added two more in Ohio State’s dominant victory over Miami (Ohio) on Sept. 21, though he did it with a little extra flair. Both of Young’s sacks saw him get to the passer, land a hit, and knock the football loose. Ohio State recovered both fumbles (Tyler Friday was credited with one, and Malik Harrison with another), and it was Young’s sacks that ultimately changed the game from somewhat competitive early to a blowout in the second quarter.

Young’s play completely changes the way that Ohio State is able to play, and can destroy essentially any opponent game plan. He’s unblockable, and it would be surprising at this point if he doesn’t beat Vernon Gholston’s sack record.