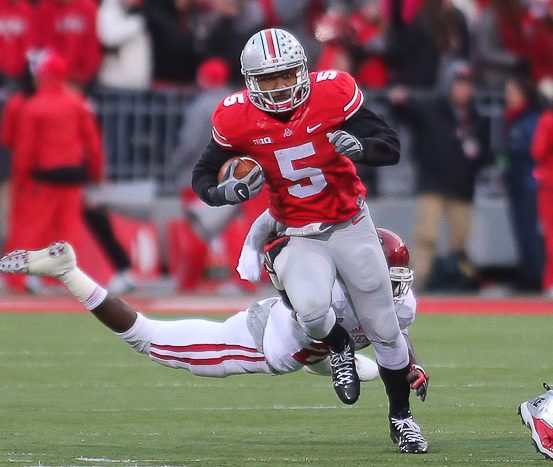 Having starred at both quarterback and wide receiver during his five-year career at Ohio State, Braxton Miller was been named the Big Ten Network’s All-Decade All-Purpose Offensive Player of the Year on Friday afternoon.

A former five-star prospect from Huber Heights (Ohio) Wayne, Miller began his college career under unusual circumstances. He was an early enrollee who participated in spring practice under Jim Tressel, only for the head coach to abruptly resign that May amid an NCAA investigation into a memorabilia-for-tattoo scandal.

Miller began his freshman season as the backup to Joe Baseman, but was promoted by interim head coach Luke Fickell by the fourth game of the season because of the Buckeyes’ offensive struggles to that point. He became just the third freshman in school history to start at quarterback, joining Art Schlichter and Terrelle Pryor.

Though Ohio State finished the 2011 season at 6-7 overall, Miller showed flashes of brilliance, notably leading the Buckeyes to a come-from-behind win over eventual Big Ten champion Wisconsin. He was also named the Big Ten’s Freshman of the Year that fall.

That carried over to the 2012 season, when Miller found himself under the direction of new head coach Urban Meyer. The accounted for 3,310 yards of total offense and 28 touchdowns to lead Ohio State to a 12-0 record, though they couldn’t play for a national championship due to a self-imposed bowl ban.

Miller was named the conference’s most valuable player and the offensive player of the year that season, then repeated the following year by accounting for 3,162 total yards and 36 scores and guiding Ohio State to the Big Ten Championship Game. The Buckeyes fell to Michigan State in that game, and Miller suffered a shoulder injury in the subsequent Orange Bowl loss to Clemson.

Miller re-injured his shoulder in fall camp, which forced him to miss the entire 2014 season and take a medical redshirt. Ohio State went on to win the inaugural College Football Playoff National Championship that year, as backups J.T. Barrett and Cardale Jones stepped up in Miller’s absence.

With Barrett and Jones expected to compete for the starting spot in 2015, rumors of Miller’s potential transfer began to surface. He instead switched to H-Back than offseason, where he caught 26 passes for 341 yards and three touchdowns and carried the ball 42 times for 260 yards and one more score.

After a strong performance at the NFL Combine, Miller was selected by the Houston Texans with the 85th overall pick (third round) of the 2016 NFL Draft. He played in 21 games across two seasons with the Texans, hauling in a modest 34 catches for 261 yards and two touchdowns. He’s also spent time with the Philadelphia Eagles, Cleveland Browns and Carolina Panthers.