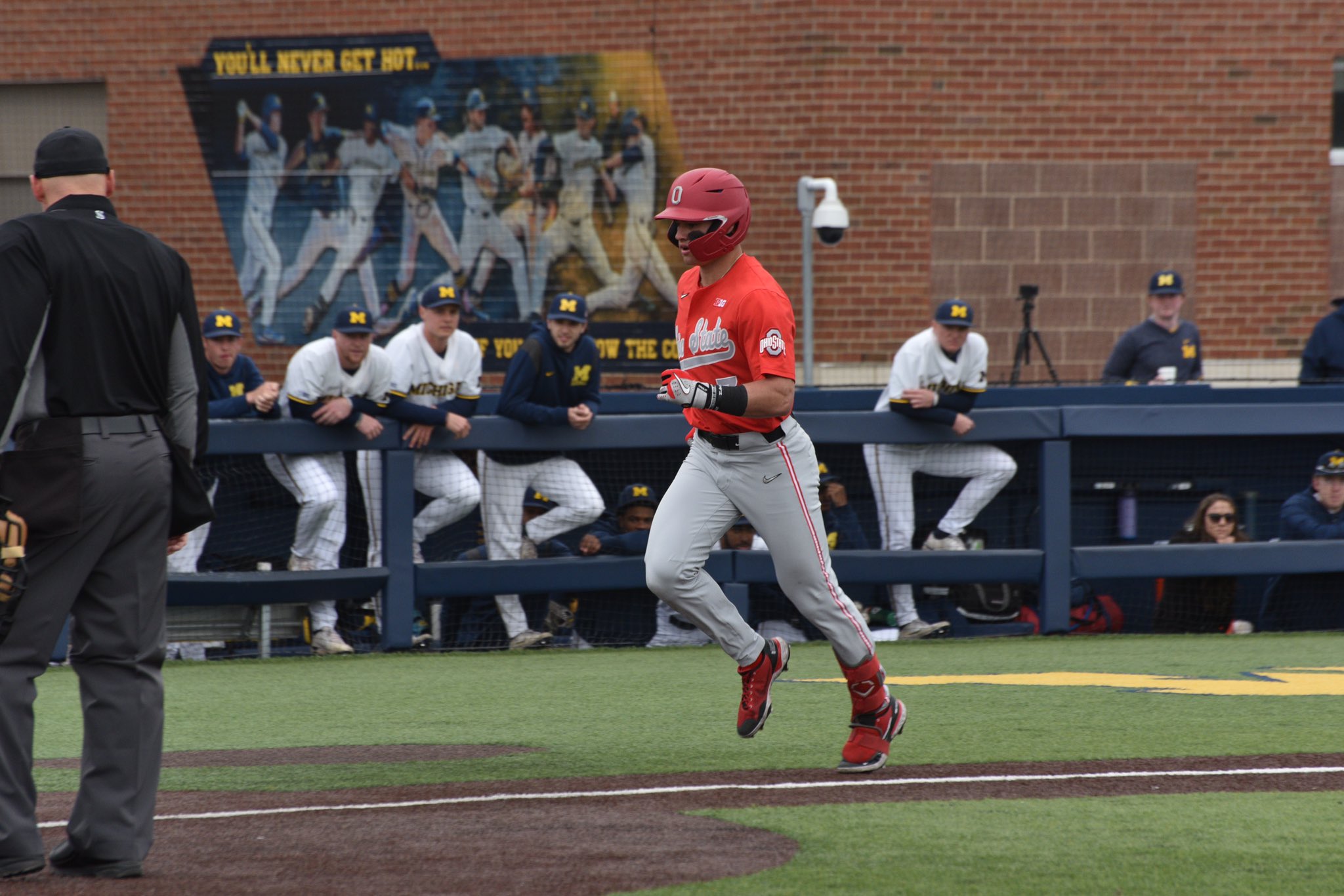 Editor’s Note: Ohio State and Michigan’s first game moved up to 1 p.m. on Friday because of expected inclement weather on Friday evening. Ohio State lost the game 9-8 in 10 innings. All statistics in this story from the Buckeyes and Wolverines are updated as of April 21.

This weekend, Ohio State baseball travels to Ann Arbor to battle with rival Michigan in a three-game series that can put the team in the mix for the Big Ten Tournament.

The Buckeyes (12-21, 2-8 Big Ten) struggled against then-No. 24 Maryland on the road and suffered a series sweep to the Terrapins, but the team rebounded with a win over Marshall on Tuesday night which helps them carry momentum into their matchup with the Wolverines.

“It will be a mano a mano matchup between their pitching staff and our offense,” Ohio State head coach Greg Beals said. “Nothing is different in this matchup. It’s been the same thing for me from 12 years ago — my first year here — until now. It’s rivalry week, and we’ve responded well.

“What I’ve challenged our guys with is the opportunity we have to go to Michigan, play ‘That Team Up North’ and win a series, which hasn’t been done in a long time. The Buckeyes haven’t won a series up there since 1999. (The Wolverines) haven’t won a road series here since I started coaching. It’s been a road battle. What a great opportunity it is for us. We need it from a conference standpoint, and we need it because that’s what the program stands for. The Ohio State and Michigan game is a big one, and we’re going to be ready for it.”

Freshman outfielder Trey Lipsey is one of three Buckeyes hitting over .300 this season with a .310 batting average. He leads the team with a .466 on-base percentage and his seven sacrifice bunts are at the top of the Big Ten. Sophomore outfielder Kade Kern has recorded a hit in 14 of his last 16 games. The Archibold, Ohio, native has raised his batting average by .170 points in the last three weeks and currently sits at .295.

In the infield, senior Zach Dezenzo leads Ohio State with nine home runs. He collected his 150th-career hit when he doubled twice against Marshall on Tuesday. Dezenzo is hitting .275 this season and paces the Buckeyes with 28 RBIs. Senior Marcus Ernst continues to lead the team in batting average at .350. He has a program-high 28 walks and his 15 strikeouts are the fewest of any everyday starter.

On the mound, sophomore right-hander Nate Haberthier is winless in three starts and has a 6.63 ERA. In 38 innings, Haberthier has struck out 30 batters and walked 10. Sophomore left-handed pitcher Isaiah Coupet leads the Big Ten and is seventh nationally with 14.28 strikeouts per nine innings. He’s tossed out 64 batters in 40 1/3 innings of action and has only walked 21 batters.

Out of the bullpen, junior right-hander Ethan Hammerberg is tied for the team lead in appearances with 16. He picked up his team-leading third save against Marshall and collected two strikeouts in the outing. His 35 strikeouts compared to six walks in 24 innings of work. Senior Griffan Smith allowed his first earned run of the season in his last outing against Maryland. Still, he averages nearly a strikeout per inning and has allowed two walks in 10 2/3 innings.

Michigan is 20-15 with a 6-3 record in the Big Ten. The Wolverines swept Michigan State last weekend behind strong performances from Clark Elliott and Joe Stewart — two players batting over .300 this season, with Elliott at .357 and Stewart at .333. Elliott leads the team with 12 doubles and 37 RBIs.

Junior infielder Tito Flores has clubbed a team-leading 10 home runs and driven in 34 runs. As a team, Michigan is third in the conference in hits and runs scored. The Wolverines are fourth in the Big Tens in home runs.

While Ohio State will enter the series as underdogs and with history in favor of the Wolverines, Beals said his team has continued developing and growing through their 33 games this spring.

“This team has been through a lot,” Beals said. “It’s been a tough season. We’ve dealt with adversity, and our guys are learning how to deal with it. There was a time this season when we were trying too hard. We were trying to find that perfect spot on the bell curves so to speak with the right level of intensity. I’m not worried about our guys trying hard, but I am worried about them trying too hard.

“When you look at the standings, it’s hard for all of us, including the players in the locker room, not to look at the bigger picture. What we are all focused on is this Friday — winning Friday and taking everything one moment at a time. We have a three-game series with Northwestern on the back end of the schedule, but that’s so far away from now. Let’s not even think about it. We need to be aggressive and attack Michigan, and we’ll find success.”