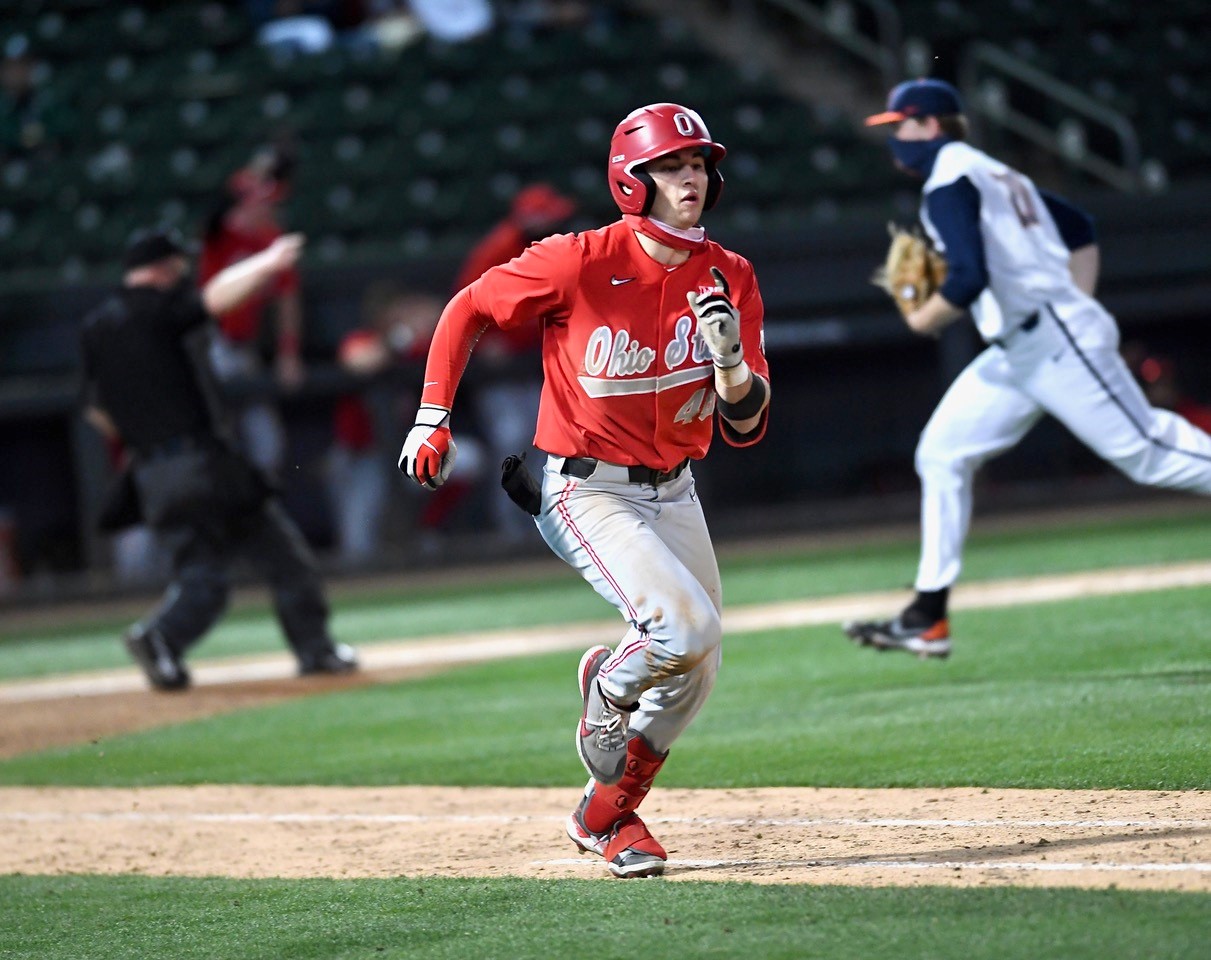 This story was originally published in the April 10 issue of BSB.

Ohio State freshman outfielder Kade Kern drew quite the crowd of college coaches during his three seasons as a phenom in Archbold, Ohio, and for good reason.

Kern filled up box scores and lit up scoreboards for the Bluestreaks, batting .406 and notching 22 doubles, five triples, 81 RBI and 77 runs scored while serving as a constant fielding force in the outfield during his high school career. His performance drew the eyes of all of the top programs in the Midwest and earned Kern quite a bit of recognition in the process.

By the time he graduated in 2020, he had been named the Ohio Baseball Gatorade Player of the Year and the Ohio Division III Position Player of the Year, selected twice as a member of the Prep Baseball Reports (PBR) All-Ohio first team, the All-NWOAL (Northwest Ohio Athletic League) first team and the OHSCA (Ohio High School Coaches Association) second team, along with inclusion as a 2019 Rawlings Perfect Game All-American.

To say that the 6-0, 195-pounder was highly decorated may be an understatement. Baseball recruiting rankings are not as prominent as those in football or basketball, but the lists that are available almost exclusively declared Kern one of the best players in Ohio. The college attention that came with that praise was only natural, but it still signified a life’s goal nearly accomplished for Kern.

“I’ve been into baseball ever since I was a little kid,” Kern told BSB. “My mom played college softball, my dad played college baseball, so I just kind of grew up in the sport. It’s been my goal to play at (the college) level ever since I’ve been a little kid. Baseball was always my favorite sport to play, so I always worked extra hard at it. This has been the goal for me since the beginning.”

Although Kern drew offers and interest from some of the top schools in the region, something clicked for him when Ohio State extended an offer to the born-and-raised Buckeye fan during his junior season.

“Oh, it was just a great feeling,” Kern said. “I was always a Buckeye fan growing up, and that was definitely a dream offer to receive. It was something that I was very excited about and humbled to have been able to receive.”

It didn’t take long for Kern to recognize that he had no interest in continuing his career anywhere else. He announced his pledge to Ohio State on Sept. 3, 2018, and completely shut his recruitment down, focusing entirely on closing out his high school career and getting to Columbus.

“It was a little bit of everything – the facilities, coaches, players, just the family,” Kern said. “I’ve always been a Buckeye fan, so that was the start of it. Then (head coach Greg Beals), he was my favorite coach out of all the coaches I had talked to because I liked his personality. I like how he coaches. Then coming on a visit down here, I liked the brotherhood that all the guys had and just how they run the program here.”

Kern lost the opportunity to close out his high school career on top because of the coronavirus pandemic that shut down every major sport in America – right around the time that Archbold was set to begin its 2020 campaign – but he’s picking up right where he left off with the Buckeyes. He found his way into the starting lineup for Ohio State to open the season, a spot that he’s held onto throughout the early stretch of the year despite his lack of experience. For Kern, any chance to get back onto the field is one that he’s more than happy to take, given the circumstances of the last year.

“Oh, it was ton of fun,” Kern said of getting back onto the field. “With COVID, it was definitely a big setback and a long wait for that with no season last year. It’s really just been preparation all last year for this moment. To finally be able to get out there and experience it was great. It was definitely nerve-racking at first, but it was a ton of fun.”

Although Kern would still be enjoying himself even if he was only seeing the field in spots, the Buckeye freshman has looked like anything but a first-year player through the opening stretch of Ohio State’s season. He’s first on the team in batting average at .338, first in on-base percentage at .405, third in slugging (.500) and first in RBI with 16. His best performance came on opening day, when he went 5 of 6 batting for a double, a triple and a trio of singles in a showing that he credits with helping him settle down and get into the groove of the college game – something he’s still working through.

“It definitely helped,” Kern said. “You never know what to expect in your first few games, so to be able to go out there and have a good first game definitely kind of helped ease the nerves a little bit. Being a freshman, it’s nerve-racking going out there every game. Every game I go out there, it’s just a little less then a little less pressure I’m feeling. I’m really adjusting to that.”

Kern said that the early hot start didn’t exactly catch him off guard but that it’s not something he could have possibly expected, either, which his head coach echoed in an interview with BSB while heaping praise on his rising star.

“Well, it’s a little bit of both there,” Beals said when asked if the Buckeye staff expected this hot start from Kern or if they were caught off guard. “I mean, we were very excited about Kade in the recruiting process and when he was coming in. He had a slow start in the fall because of COVID protocols, all of our freshmen did, just not having normal training in the fall semester. It slowed down the development of our personnel a little bit. But Kade Kern is a diligent worker and put a lot of work in and made sure that he was ready. We knew he was talented, but it’s hard to say that a guy is ever going to start as fast as he has.”

The hot start makes sense, even if it was difficult for Kern or his coaches to predict. Kern pays an immense amount of attention to his preparation both in the offseason and in the flow of the regular season, be it in strength training, batting practice or even the more granular pitch studying and vision training. Youth or not, Kern was ready to play at the college level when he arrived at Ohio State.

“There’s a bunch of people involved with that – nutritionists, strength coaches, hitting coaches, my whole coaching staff here. There are a lot of people that have helped me figure out a preparation plan, a way to prepare and a way to be ready for games.”

There’s a secret weapon here, too: Kern is an excellent golfer. It’s not baseball preparation in the traditional sense, but he sees a lot of parallels between the sports both physically and mentally.

“The swings definitely are very similar, but I think the biggest factor that I can take away for golf is the mental aspect of it,” Kern said. “Golf can be a difficult sport and frustrating. So can baseball at times when you’re batting. I think being able to calm myself down in tough situations, that’s what I take away from golf.”

As Kern gets deeper into his career in Columbus and more comfortable with each passing game, he plans to rely heavily on that preparation that’s gotten him this far. He’s quick to acknowledge that he has professional aspirations like anyone who reaches the level he has, but he’s even quicker to embrace the goals of the team.

“I want to win Big Ten championships,” Kern said. “I want to go to Omaha each year. That’s a goal we all have. I want to be a great team player for all my guys and just keep continuing to get better and better every game.

“I just work as hard as I can and hope for the best outcome. The sky is always the limit for all of us. Obviously, I’m working towards a goal like that and I want to perform to my best, but that’s something you can’t expect. You just work hard and hope that it happens.”