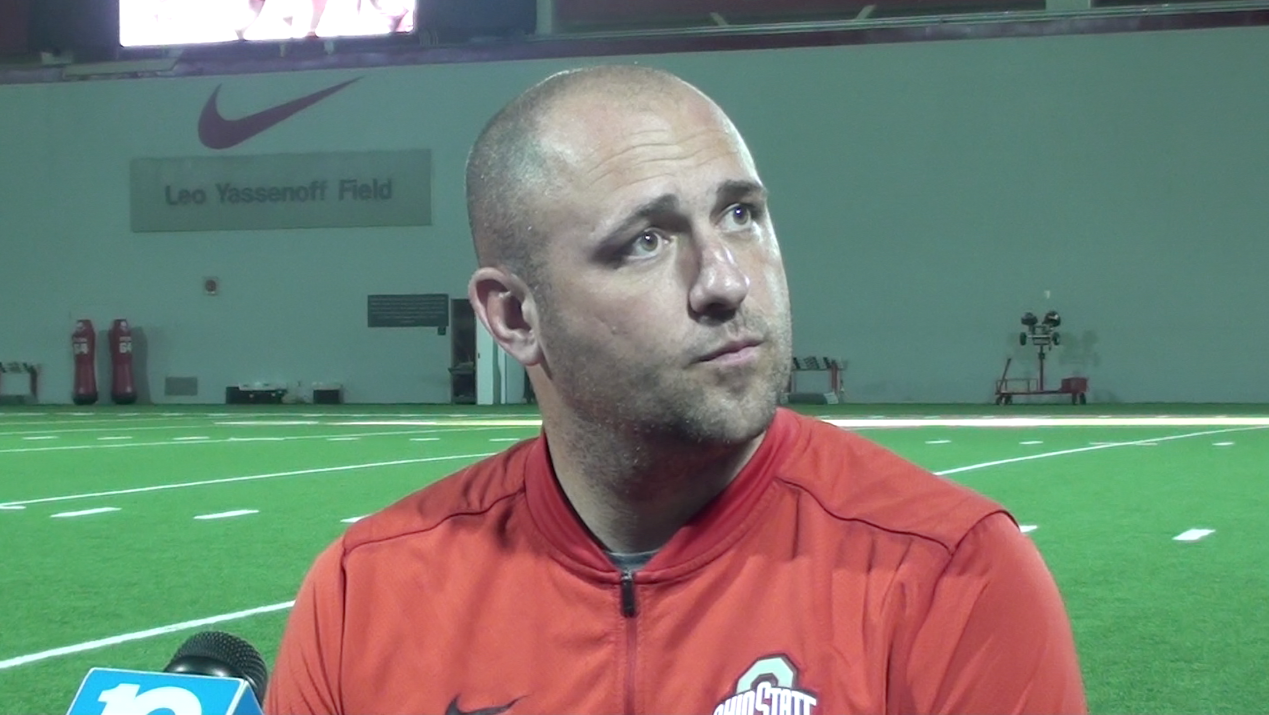 Ohio State wide receivers coach and recruiting coordinator Zach Smith was due Wednesday in Delaware (Ohio) Municipal Court on a charge from two months ago, which stated that an arrest was filed for criminal trespassing, but personal attorney Brad Koffel painted a complicated case for his client.

In a Wednesday interview with Columbus radio station 610 WTVN, where he doubles as a legal analyst, Koffel shed more light on Smith’s situation.

After they appeared at 2 p.m. in court for a pre-trial hearing on Smith’s charge of criminal trespassing from a May 12 incident with his ex-wife, Courtney, Koffel emphasized how his client was never taken into custody.

“No, no (Smith was not taken into custody),” Koffel said. “He went over to the Powell (Ohio) Police Department when he found out that his (ex-)wife called the cops on him. He called me and I called Powell PD and said, ‘What could you be possibly charging him with?’ And they said, ‘Criminal trespassing.’ I said, ‘He was there through the shared-parenting plan.’

“And we didn’t think he was going to get charged and then I get a call a few days later saying, ‘Yep, he has to come by and pick up a copy of the complaint.’ I said, ‘You’ve got to be kidding me. Will you please call the Delaware prosecutor before you do this?’ And I don’t know if they did or didn’t, but I told Zach, ‘Look, you’ve got to go over to the police department and pick that up and get it to me.’ And that’s where we are.

Koffel delved deeper into the story behind the case.

“It’s important to know that Zach and his ex-wife have been divorced for a couple years,” Koffel said. “They have two kids as a result of this marriage and, as many divorced families, they have a joint plan for shared parenting and those parents have rights under these types of parenting agreements.

“This is a Saturday evening in May and Zach was returning their (8)-year-old son to his ex-wife, which had previously been agreed upon. He did exact location of the drop off. They were texting each other as to where to meet. She told him to meet at their apartment complex clubhouse. He drove there, she wasn’t there and he dropped the son off at her apartment and she was waiting for him with her cellphone out and took a picture of him in their driveway. He left and then she called the Powell police and said it was trespassing.

Although municipal court records and an incident report revealed how Smith’s incident happened two months ago, followed by a May 22 file in the Delaware County Municipal Court database, initial reports of it surfaced within the hour of his pre-trial hearing.

“Well, why the headline (Wednesday)? We’re not sure,” Koffel said. “A large part of me thought this story would break in May and we would’ve been dealing with it in May, but it breaks 45 minutes before his pre-trial today at 2 o’clock. We were in court when this broke.

“(Smith) just was beside himself. He just can’t believe that this has been reported inaccurately as an arrest and people are drawing inferences on the story that somehow there’s a protect order against him, there’s not, that he’s abusive, he’s not.

“This literally is a couple that is in their third year of a divorce and they’re working through shared parenting, and there’s nothing in the shared-parenting plan that mimics where Zach can drop off their kids and dropping their son off at her apartment driveway — and never getting out and driving away is not a crime, is not a violation, is not a violation of the shared-parenting plan.”

Due to the aforementioned absence of a shared-parenting plan copy, Koffel said Smith’s case continues.

“I told, encouraged the prosecutors early on not to do this (take it to a pre-trial hearing) because there was a shared-parenting plan,” Koffel said. “But I don’t know that it was ever presented. It’s under seal in Delaware County.

“The case should be dismissed, but it wasn’t (Wednesday) and it’s pretty ugly. They’ve wanted him to plead guilty and be on supervised probation.”