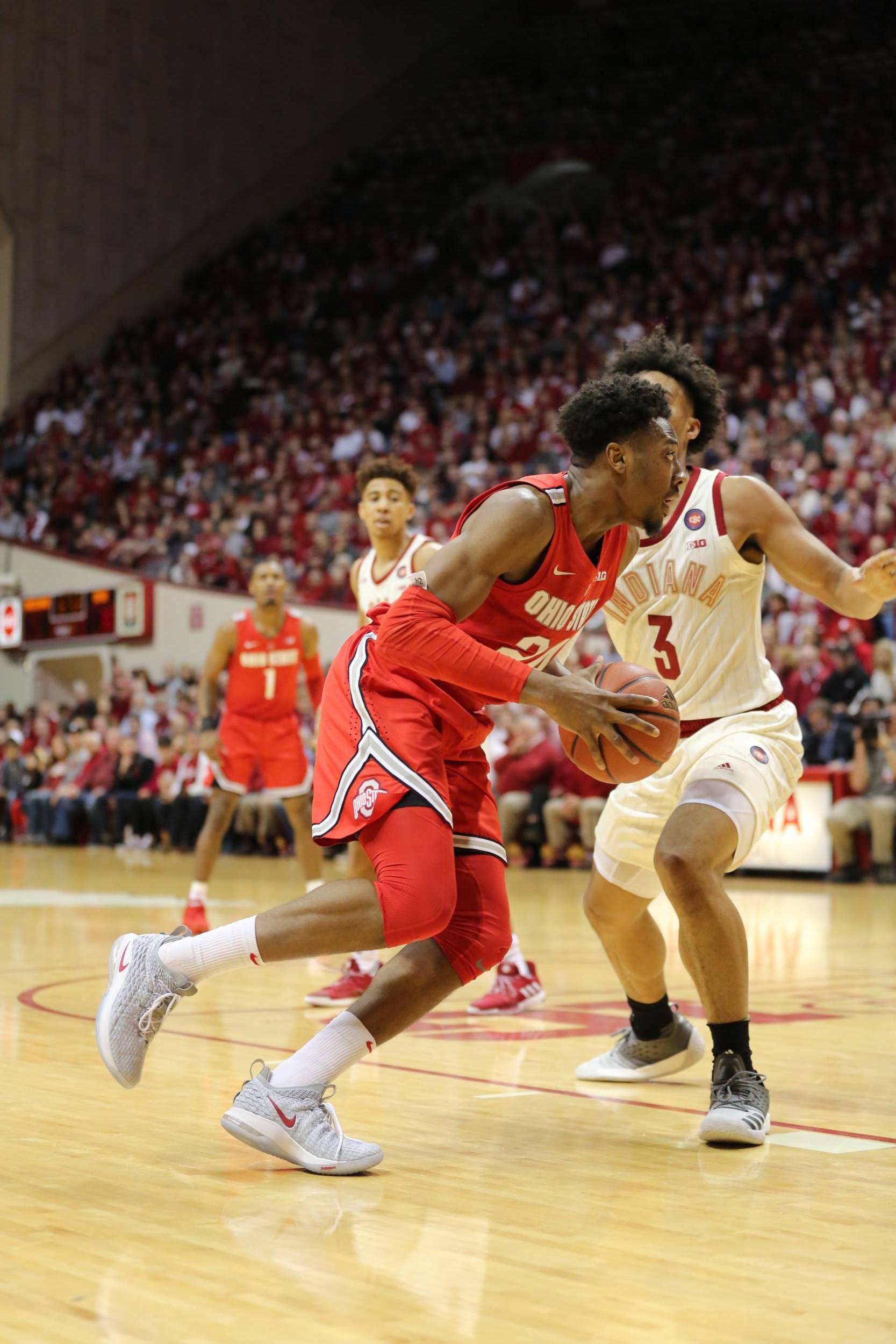 Andre Wesson’s dunk put Ohio State ahead with 20 seconds left and Luther Muhammad added a free throw with eight seconds to play to lead the Buckeyes to a 55-52 win over Indiana at Simon Skjodt Assembly Hall in Bloomington, Ind. on Sunday for their third straight win.

Wesson led Ohio State with 15 points. Kaleb Wesson and C.J. Jackson each had 10 for the Buckeyes.

After OSU went ahead 54-52, Langford’s three-pointer rolled the rim and came out with 12 seconds left. Duane Washington Jr. grabbed the rebound for OSU and was fouled. Another foul put Muhammad at the line and he made one of two free throws.

Indiana’s lone victory during it slide was a 79-75 upset at then-No. 6 Michigan State on Feb. 2. The Hoosiers had lost their previous three home games by an average of 14.3 points.

Freshman Musa Jallow, from Bloomington North High School, helped the Buckeyes to a 20-12 advantage on the boards by grabbing five rebounds. He finished with six rebounds but did not score.

The Buckeyes used a 9-0 run to jump to 11-2 by the 15:22 mark, hitting five consecutive shots. But Ohio State was plagued by turnovers throughout the first half, committing nine that resulted in 11 points for the Hoosiers.

Three of the miscues in a two-minute stretch allowed Indiana to pull to within 11-9. OSU led 21-14 with 3:58 left but the Hoosiers were able to climb to within two at the break when Al Durham scored a transition bucket for the final points of the first half with 24 seconds left.

After Indiana tied it at 23 early in the second half, the Buckeyes reeled off seven straight points, including a three by Muhammad, for a 30-23 lead.

Kaleb Wesson, who had fouled out in three of the previous five games, picked up his first foul only 24 seconds into the game going for a defensive rebound. He didn’t get another until 58 seconds left in the opening half and was immediately replaced by freshman Justin Ahrens.

Andre Wesson picked up his third foul with 15:17 left in the game, a blow to the Buckeyes because he had kept Juwan Morgan, who averages 15.9 points, scoreless to the that point.

With Wesson, out Morgan made an old-fashioned three-point play five seconds later to make it 34-28 for his only points of the game. Wesson reentered with 11:55 left and OSU up 39-34.

Ohio State led 42-38 when Andre Wesson hit a basket to end a 4:20 drought for the Buckeyes and he followed with a 3-pointer to make it 47-38 before got Indiana consecutive treys by Langford, Green and Langford again to tie it at 47 with 4:54 left.