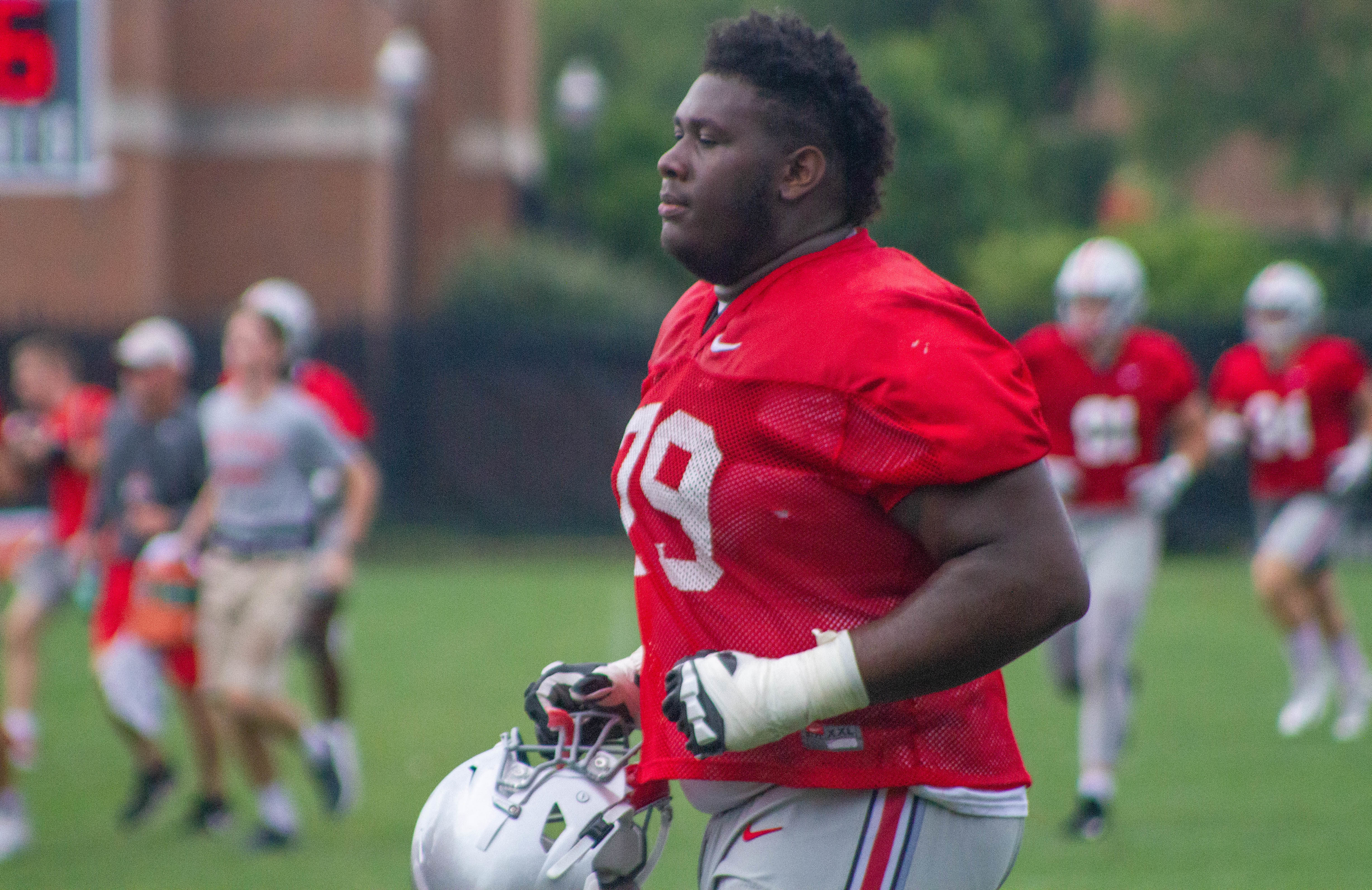 Before the 2021 season, Ohio State offensive lineman Dawand Jones wasn’t much of a household name for most Buckeyes fans. While some knew of his athleticism and size, Jones hadn’t developed enough consistency to make them hopeful enough that he would soon make a significant impact.

When Thayer Munford moved to the interior offensive line and Nicholas Petit-Frere took over the quarterback’s blindside, Jones became a frontrunner to start at right tackle. The Indianapolis native stepped in and immediately made his mark. According to Pro Football Focus, Jones earned the eighth-best run-blocking grade (90.6) in the country last season.

Still, Jones has a lot left to prove if he wants to reach the next level in his senior season. With one more year of development, the 6-8, 360-pound lineman could be one of the nation’s best right tackles. He also could be an intriguing NFL Draft prospect if he declared after next year — something he considered after Ohio State’s Rose Bowl win over Utah.

“At the end of the season, you normally get a draft grade. I had seen mine in the fourth or fifth round,” Jones said on March 31. “I think after playing my season and just seeing my potential, I think coming back one more year could do me some good.”

Jones said the draft grade didn’t surprise him. After all, he started for one season on the offensive line, so he didn’t expect much. Jones wanted to know how the NFL viewed him, approaching the situation with cautious optimism. He said he treated the situation like a college basketball player thinking about the NBA Draft but doesn’t hire an agent — like Buckeye hoops star Malaki Branham.

Ohio State head coach Ryan Day claimed there were discussions that Jones could depart for the draft in the winter. However, the late-round projection didn’t provide enough confidence good for Jones, who aspires to be a first-round pick before his collegiate career ends.

“There was conversation in the building. I know there was conversation outside the building. You identify where you think you could go in the draft and decide whether that makes sense for you and your future,” Day said last Tuesday. “He wanted to come back and be a first- or second-rounder. That’s his goal. He’s been challenged with a set of things that he needs to get done if he wants to get there.

“I don’t think there’s any question he has the ability and the talent to be one of the better tackles in the country. Now whether he is or not, there are certain things that he’s going to have to get accomplished here in the offseason and then during next season to get to that point. Consistency is going to be one of them. But he’s done some good things, and I think he knows what those things are that he wants to get done.”

While Jones excelled in the running game, his pass-blocking grade (78.8) ranked 40th of all qualified right tackles. With those numbers in mind, it’s clear that Jones needs to improve his pass protection if he wants to see his name climb draft boards. That is not lost on Jones, who acknowledged that growth area last week.

“I need to be consistent, making sure I can pass block. The NFL is all pass game, so if you can’t pass block – or run block, that comes naturally to me just with how big I am – you’re not going to last long,” Jones said. “I just gotta become consistent there and consistent in practice.”

Jones claims he’s clicked thus far with new offensive line coach Justin Frye, who came to Ohio State from UCLA in the offseason and has challenged Jones and other linemen to think more critically about their pass and run blocking technique.

“I bought in a lot, and I listen to him. He’s like a mentor almost,” Jones said about Frye. “Every time I need something, he’s right there. He’s like my right-hand man right now, I’d say. I didn’t even know that (he was from Indiana) until he told us on the first day. You can get that connection with our new coach.”

Ohio State offensive coordinator Kevin Wilson fielded a question from the media asking if he had considered moving Jones to left tackle after Petit-Frere announced he would forgo his final collegiate season and enter the NFL Draft.

“It’s not like everybody has to play left tackle,” Wilson said with a slight chuckle.

According to Day and Wilson, Paris Johnson Jr., who started at right guard last season, is the left tackle in spring practices. Wilson said the former No. 1 overall tackle prospect would stay there unless otherwise noted.

Wilson said both Johnson and Jones must shore up their pass blocking this offseason, understanding that Ohio State anticipates facing talented pass rushers throughout the regular season and into a College Football Playoff run.

“As big as (Jones) is and as talented as he is, and same with Paris with the talent, their ability to handle one-on-one matchups, grown men on grown men one-on-one and be dominant, is a huge challenge,” Wilson said. “And the great players can do that.”