Ahrens Returns To Form Against Maryland 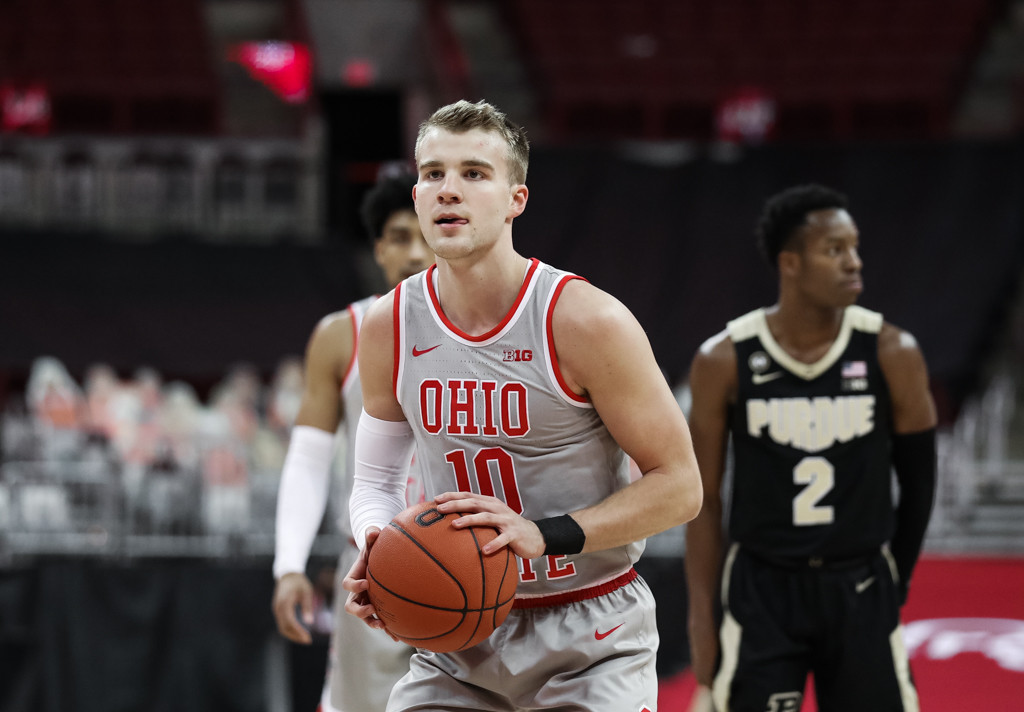 In the second game since losing his starting job for the Buckeyes, Ahrens found his rhythm against Maryland on Sunday afternoon, knocking down four 3-pointers in a 14-point performance that marked his highest scoring total since Dec. 8.

Ahrens’ shooting provided a spark for the Ohio State offense in the Buckeyes’ 82-67 win over the Terrapins, which is a significant storyline following his two-month-long slump endured through virus-related pauses and a demanding Big Ten schedule.

“Obviously I’m a shooter, so when I’m not making shots, I feel like I’m almost useless out there,” Ahrens said after the game. “The coaches told me I’m one guy that can be out on the court and not hit shots and still have a positive impact on the game with a bunch of different things: My communication, rebounding, talking on defense, just the little things that some guys don’t bring to the floor. Just staying with it each and every day was the main thing for me to get through that stretch.”

Ahrens was the fourth player off the bench behind Cedric Russell, Kyle Young and Joey Brunk against Maryland. In the previous nine games, Ahrens averaged only 3.7 points per game, down from 9.1 in Ohio State’s nine games before that. Before that fateful game with Wisconsin, he was shooting 44.4 percent from 3-point range, a number that had dropped to 21.4 percent since the Buckeyes beat the Badgers.

“It’s frustrating because it feels like the whole fan base is against you when you’re not doing what you’re supposed to be doing,” Ahrens said. “But for me, it was just one day at a time. Just being an everyday guy like I’ve been all four years here.”

Ahrens logged 11 minutes for the Buckeyes against Purdue on Jan. 30 and scored three points on 1-of-4 shooting from deep. Despite his a steady volume of shots, it was the sixth straight game in which Ahrens had knocked down one or fewer threes for Ohio State,

“You would never have noticed any difference in Justin Ahrens the next time we came to practice,” Holtmann said. “He was the loudest, the most energized, the best talker in practice, and that is a mature kid. When I talk about pro’s pro, that’s exactly what it looks like. Most kids, when they have a bad game – and if you lose – they come in and they don’t have the same spirit that Justin had. His spirit has not waned through this stretch.”

Even if Ahrens didn’t show it in practice, Holtmann said the Versailles, Ohio, native was going through an internal struggle as a result of his on-court performance over the past couple months.

“When a guy’s as prolific as he’s been – he’s been one of the best shooters we’ve had, consistently, for four years – he’s never had a stretch like this. So I think he got really frustrated,” Holtmann said. “But again, he’s too good a shooter to shoot like this the rest of the year.”

Ahrens understands his shot will eventually fall, and his performance against the Terrapins is proof that patience can be a much-needed virtue.

“When you hit two or three in a row, you definitely get a rhythm and start to feel yourself. I’ve learned the last two weeks just to brush it off,” Ahrens said. “There’s a lot more games to play. The game’s fast, you can’t just sit back and dwell on every mistake you make. If you do that, you’re just gonna keep making more mistakes. One thing I really learned was just to keep it pushing, keep doing you, keep playing hard. Impact the game any way you can.”