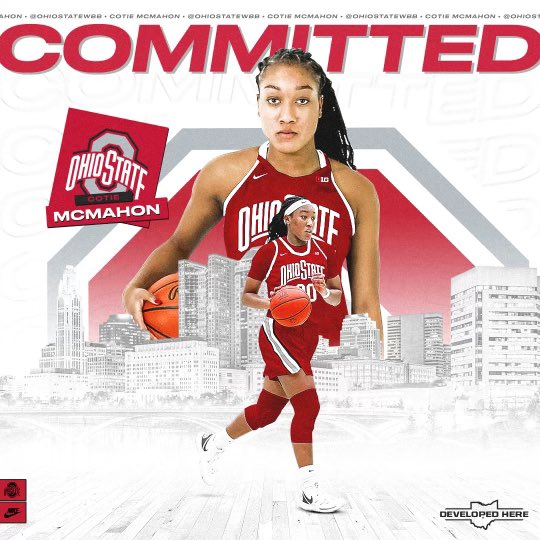 Ohio State women’s basketball earned the first commit of its 2022 class with Centerville, Ohio four-star wing Cotie McMahon, who announced her commitment to the Buckeyes Thursday.

“First I’d like to thank God for the many blessings he has blessed me with. Secondly, I want to thank my family for supporting me through this journey. This has been a wonderful process, I’d like to thank everyone who has ever helped me to get to this position in my life. To you all, I am forever grateful,” McMahon wrote in the tweet. “I am very blessed to be able to say that I am taking my talents to THE Ohio State University to further my basketball dreams.”

“Strong, athletic perimeter performer drives and attacks the defense; finishes plays in traffic, delivers at the charity stripe,” ESPN’s Dan Olson wrote of McMahon. “Plays with high motor effort, rebounds and handles coast-to-coast; catch and shoot game at the arc; among the elite prospects in the class of 2022.”

At Centerville, McMahon finished her last season third in the Greater Western Ohio Conference in scoring with 18.9 points per game. She shot 53.1 percent from the field and 38.2 percent from three, and also added 8.0 rebounds and 2.2 steals per game.

In one game this season against Ursuline Academy on Nov. 25, McMahon scored 23 points on 11-of-19 shooting while bringing in eight rebounds and adding three steals and two blocks. Centerville won the game 52-45.

The 5-11 wing received an offer from the Buckeyes in June 2018, and becomes the first Ohio State commit in the 2022 class. The Buckeyes have officially signed a pair of commits for their 2021 class in guards Kaitlyn Costner and Taylor Thierry.