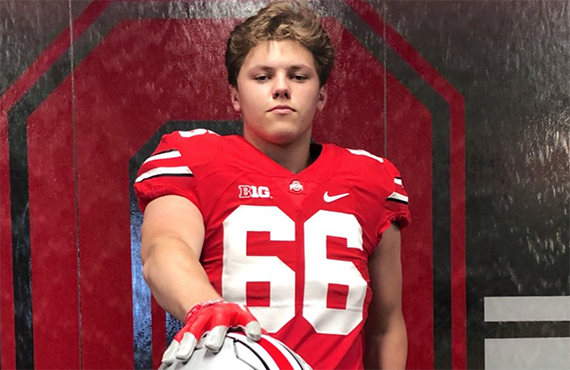 The 6-8, 289-pound Rucci is considered the third-best offensive tackle and No. 13 prospect overall in the class of 2021, and also earned first-team all-state honors after he helped the Warriors to the state semifinals last season.

Rucci landed an offer from the Buckeyes in January 2019, then made his first and only trip to Columbus for the spring game that April, where he spent time with head coach Ryan Day and offensive line coach Greg Studrawa. The two sides have maintained contact, but other programs have made him more of a priority in the meantime.

That includes the home-state Nittany Lions, who — according to the 247Sports crystal ball predictions — are the overwhelming favorite to land his pledge. Both of his parents attended Penn State, with his dad playing football for the Nittany Lions from 1988-92 before enjoying an eight-year NFL career with the New England Patriots.

It’s worth noting that didn’t stop Rucci’s older brother, Hayden, from picking the Badgers during the 2019 recruiting cycle. A tight end, he’ll be a redshirt freshman in the fall.

The Buckeyes already have two of the Keystone State’s top-five players in the fold, as well, with Philadelphia St. Joseph’s Prep five-star quarterback Kyle McCord and four-star wide receiver Marvin Harrison sitting at No. 2 and 5, respectively.