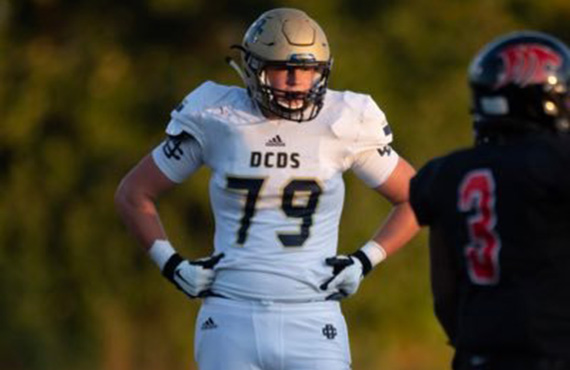 Blessed for this opportunity! Thank you to all the coaches for making this an amazing experience. With that being said these are my top 4 schools Recruitment open. Edit: @Hayesfawcett3 🔥 pic.twitter.com/b1zsotWlzE

The 6-7, 280-pound Tiernan is considered the 32nd-best offensive tackle and No. 369 prospect overall in the class of 2021, though he was notably named first-team all-state at defensive tackle after he recorded 59 tackles, 22 tackles for loss and 8.5 sacks to lead the Yellowjackets to the state finals last season.

Tiernan landed an offer from the Buckeyes last September and visited campus a few weeks later for the 38-7 win over Wisconsin in October. He’s been in contact with head coach Ryan Day, offensive line coach Greg Studrawa and defensive coordinator-area recruiter Kerry Coombs, who stopped by his school during the late-January contact period.

The Wolverines are currently the favorite in Tiernan’s recruitment, holding all five 247Sports crystal ball predictions. But that’s to be expected from the Buckeyes’ standpoint, given the staff already holds a commitment from Richfield (Ohio) Revere four-star offensive tackle Ben Christman and has several higher-ranked players at the position on their priority chart, including Fairfax (Va.) Robinson Secondary five-star Tristan Leigh and Bradenton (Fla.) IMG Academy four-star J.C. Latham.

Tiernan — who was set to visit for the annual spring game on April 11 until it was cancelled amid the coronavirus outbreak — doesn’t plan to make a decision until after he takes his official visits in the fall, one of which will be to Ohio State. Perhaps if the Buckeyes miss out on one of their aforementioned targets, they’ll roll out the red carpet that weekend.