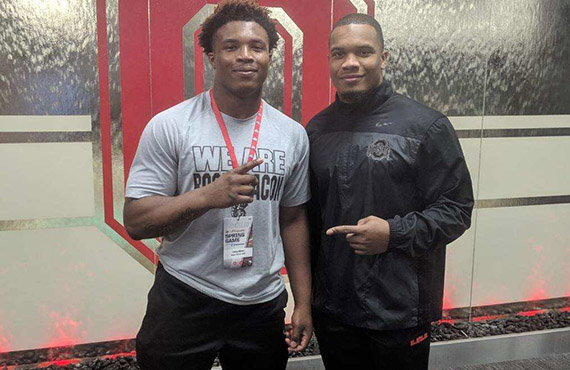 In no particular order these are the schools I feel most comfortable with and hope to grow closer with. Things can change over the next few weeks/months but this is my top ten, recruitment 100% open! (Edit By: @bspaeth7) pic.twitter.com/u6Uq2L9mbE

The 5-10, 205-pound Kiner is considered the 10th-best running back and No. 160 prospect overall in the class of 2021, as he rushed for 2,298 yards and 40 touchdown to lead the Spartans to the regional semifinals last season. He also added nine receptions for 122 yards and another score, as well as 523 yards and three touchdowns as a punt and kick returner.

Running backs coach Tony Alford extended a scholarship offer to Kiner last May, a few weeks after his unofficial visit for the annual spring game, while head coach Ryan Day has also been involved in his recruitment in the months since. Both assistants stopped by Roger Bacon during the January contact period, at which time they explained the need for the Buckeyes to bring on two running backs in the current cycle.

Kiner does not appear to be close to making his college decision, and will instead focus most of his attention this spring on track and field rather than recruiting. He’s expected to return to campus for a game in the fall.

That said, Kiner recently had a bit of fun with the recruiting process by revealing a list of his top five restaurants on Twitter before announcing his commitment to eat at Skyline Chili that evening. Those outside of Cincinnati might question his decision-making skills, though.