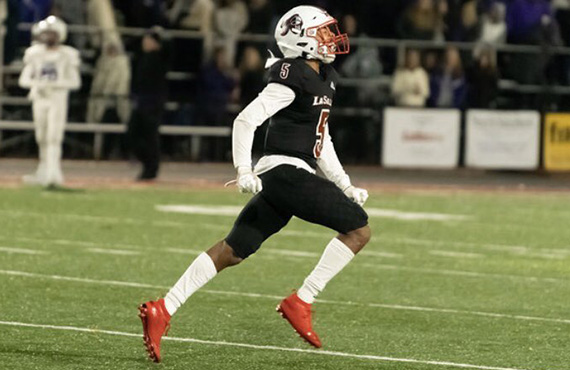 Ohio State’s landed its second commitment in as many days when Cincinnati La Salle three-star cornerback Devonta Smith pledged his services to the Buckeyes on Monday morning.

The 6-0, 185-pound Smith — the cousin and teammate of four-star safety commit Jaylen Johnson — is considered the 32nd-best cornerback and No. 428 prospect overall in the class of 2021, as he recorded 92 total tackles, five interceptions and forced two fumbles to be named third-team all-state last season. He also returned six punts for touchdowns to help the Lancers to the state title.

Smith landed an offer from defensive coordinator Kerry Coombs on March 12, which was a little earlier than expected since his scheduled March 28 unofficial visit was cancelled amid the aforementioned coronavirus concerns — though it’s likely he would have committed during that visit.

Ohio State is looking to add at least one more player at the position this cycle, with Marcus Williamson set to graduate and Shaun Wade, Sevyn Banks and Cameron Brown all eligible to enter the NFL draft following the 2020 season. Other notable targets include Virginia Beach (Va.) Princess Anne five-star Tony Grimes; Nashville Ensworth four-star Andre Turrentine; and IMG Academy four-star Kamar Wilcoxson, a two-time Florida commit who is set to take an official visit to Ohio State on June 12-14.