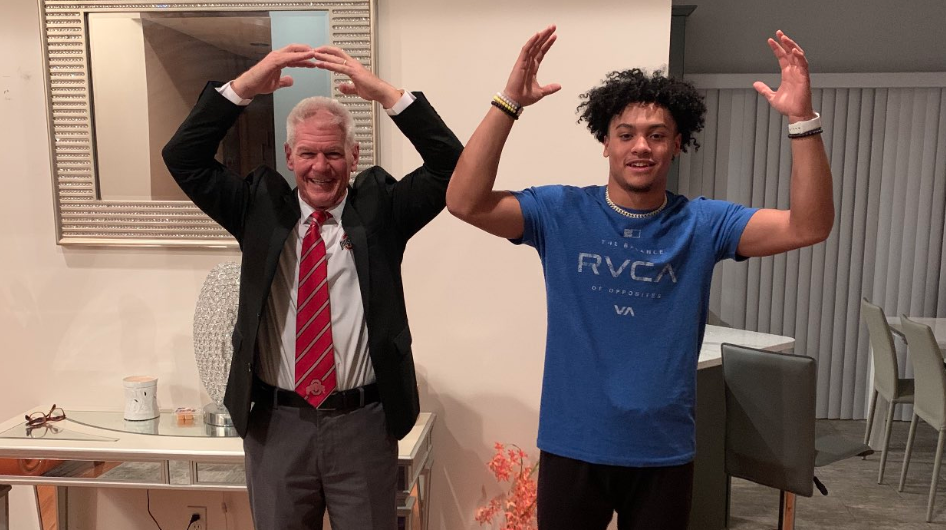 Ohio State put the finishing touches on its 2020 class when it officially signed four-star Muskegon (MI.) athlete Cameron Martinez, the 25th and final member of the class that will finish at No. 5 in the country.

Martinez was the lone Buckeye commit to abstain from signing back in December during the early signing period. Recruited as a defensive back by Ohio State, the decision to hold off on signing was a direct result of former co-defensive coordinator Jeff Hafley accepting the head coaching job with Boston College, leaving Martinez without a position coach in Columbus.

However, after brief looks at Northwestern and Notre Dame, Martinez stuck with the Buckeyes, thanks in large part to a newfound relationship with his new primary recruiter and position coach Kerry Coombs, who was officially hired by Ohio State on Jan. 20.

Martinez’s interest in the duo of Illinois schools subsided shortly after an in-home visit from Coombs, and on Jan. 28, he reaffirmed his pledge to Ohio State on Twitter.

“I will be signing and honoring my commitment to be a Buckeye, a lifelong dream of mine,” Martinez said. “I couldn’t be more excited and thankful to Coach Day and the rest of the coaching staff!”

The 5-foot-11, 183-pound former Michigan player of the year is listed as a defensive back on Ohio State’s official roster, and will start his career at Ohio State on the defensive side of the ball, despite playing on both sides in high school. Ryan Day, however, said that he will have the chance to move around in Columbus.

“We’re gonna give him a chance to play on both sides of the ball, which is unique,” Day said. “He’s one of the most under-recruited kids in the entire country.” Day went on to mention that Martinez will also look to compete for time as a kickoff and punt returner.