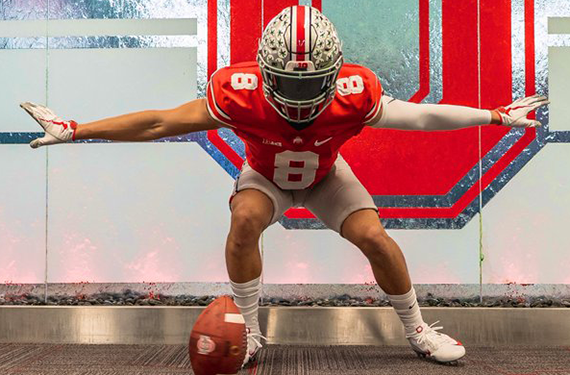 Ohio State landed a commitment from one of the nation’s top-rated defensive backs on Tuesday afternoon when Tucson, Ariz., Salpointe Catholic four-star safety Lathan Ransom pledged his services to the Buckeyes on his 17th birthday.

The 6-1, 193-pound Ransom is considered the fourth-best safety and No. 76 prospect overall in the class of 2020, as he recorded 82 total tackles, eight pass break ups and six interceptions to lead the Lancers to the state championship game last fall. He picked Ohio State over finalists LSU, Notre Dame, Oklahoma and Texas.

Co-defensive coordinator/secondary coach Jeff Hafley extended a scholarship offer to Ransom in January, and he made his first trip to Columbus for an unofficial visit just a few weeks later. The Buckeyes clearly made an impression, too, as he listed the program in his Top 5 in the spring.

Both the Fighting Irish and Longhorns were considered the favorites in Ransom’s recruitment at various times, as the former shares a number of similarities with his Catholic high school while the latter was a major player in the recruitment of his teammate, five-star running back Bijan Robinson. That all changed when Ransom took an official visit to Ohio State in mid-June, however, and a flood of 247Sports Crystal Ball predictions were placed in favor of the Buckeyes.

Ransom becomes the 20th member of Ohio State’s 2020 recruiting class, joining four-star cornerbacks Lejond Cavazos and Clark Phillips III in the Buckeyes’ secondary. Three-star athlete commit Cameron Martinez may also end up there, as well, though he’ll also get a look at wide receiver to begin his career.

Robinson is also widely expected to pick Ohio State when he announces his college commitment on Aug. 2, which would give the Buckeyes pledges from three of the top five prospects in Arizona — Scottsdale Chaparral four-star quarterback Jack Miller being the other. Miller played a major role in helping Ohio State land Ransom’s pledge, too, as they were seen spending significant time together at The Opening Finals in Frisco, Texas, earlier this month.