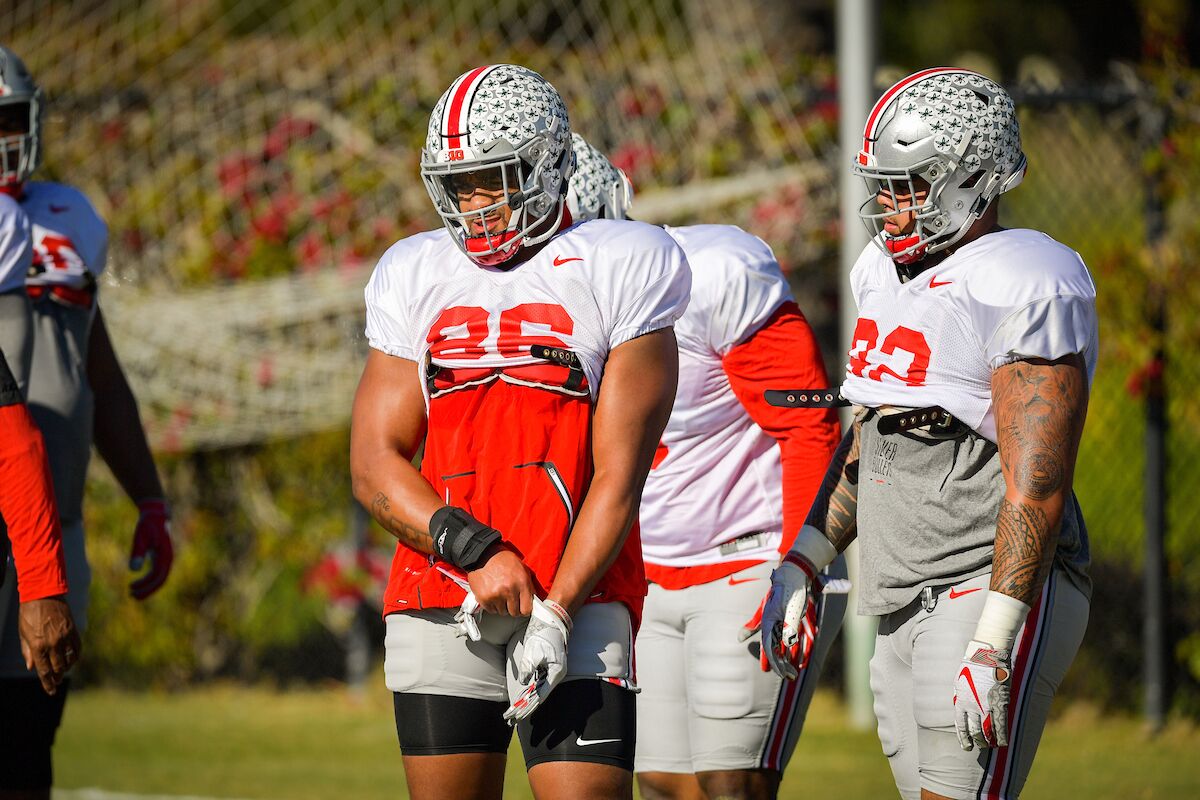 With four freshmen in Ohio State’s deep rotation of defensive linemen throughout the 2018 season, Haskell Garrett flew somewhat under the radar.

As a sophomore, Garrett earned more time in the trenches for the Buckeyes — in fact, he played a bigger role for the “Rushmen” than the numbers indicate.

After the unit lost Nick Bosa, whose late-September injury and core-muscle surgery led to a mid-October departure, OSU typically started Dre’Mont Jones and Robert Landers inside with Jonathon Cooper and Chase Young outside.

In addition to Davon Hamilton, Garrett appeared among the rotators at tackle, where he spent most of his time throughout 14 games.

But on top of the three-technique spot, Garrett grew his versatility as an end, where he saw an uptick in snaps at times while Ohio State battled midseason depth concerns.

“In terms of what (the Golden Gophers) do, in the red zone and how heavy they were as an offensive line, we could afford to put a bigger body out on the outside. So I was more than willing to switch up and learn the different plays out on the end.”

The four-star Garrett signed with the Buckeyes’ 2017 recruiting class as the 247Sports composite’s No. 68 overall prospect, No. 6 defensive tackle and No. 4 player in Nevada.

Despite his time outside with Las Vegas Bishop Gorman, Garrett arrived in June 2017 for summer enrollment and played immediately inside with three tackles in eight games.

While he recorded seven tackles as a sophomore, the 6-2, 292-pounder proved to be a valuable asset on OSU’s defensive line after Cooper missed the 30-14 win Oct. 13 over Minnesota and Tyler Friday sat out the 36-31 victory Nov. 3 against Nebraska.

“I would like to (play both positions), if it’s required of me, yes,” Garrett said as he enters the 2019 campaign, his junior year. “I’ve always been flexible and been able to adapt to my adjustments, so I like (tackle and end). I don’t mind it at all. I like playing all around the D-line. I find it fun. As long as I get on the field, that’s all that matters and I contribute to the team.”

In his second season spent with defensive line coach Larry Johnson, Garrett felt like he took several steps as the development paves the way for an increased role next year.

“Being more confident, playing with confidence on the field and having fun,” Garrett said of what he felt like his sophomore campaign under Johnson accomplished. “Just being more stout in my game plan. Got a lot stronger, more conditioned and a lot better with my hand-eye coordination, reading plays and understanding what I’m doing on the field.

Jones left early for the NFL draft, which puts Garrett firmly in the mix for the vacancy on the interior.

With a “sense of urgency” gained from veterans before him, such as Bosa and Jones, Garrett takes lessons learned at each position as he embraces his role — wherever it is — in 2019.

“It’s not really a competition,” Garrett said. “It’s really a contribution. Everyone’s contributing, keeping our legs fresh throughout the game and we don’t want to be tired in the fourth quarter. We always want to stay fresh, so Coach J always preaches stay fresh and always being the freshest pair of legs on the field. We want to wear our opponent out, so by staying fresh, we play to our max capacity.”