Men’s Hockey: What A Downer — No. 2 Buckeyes Swept At Home By Minnesota 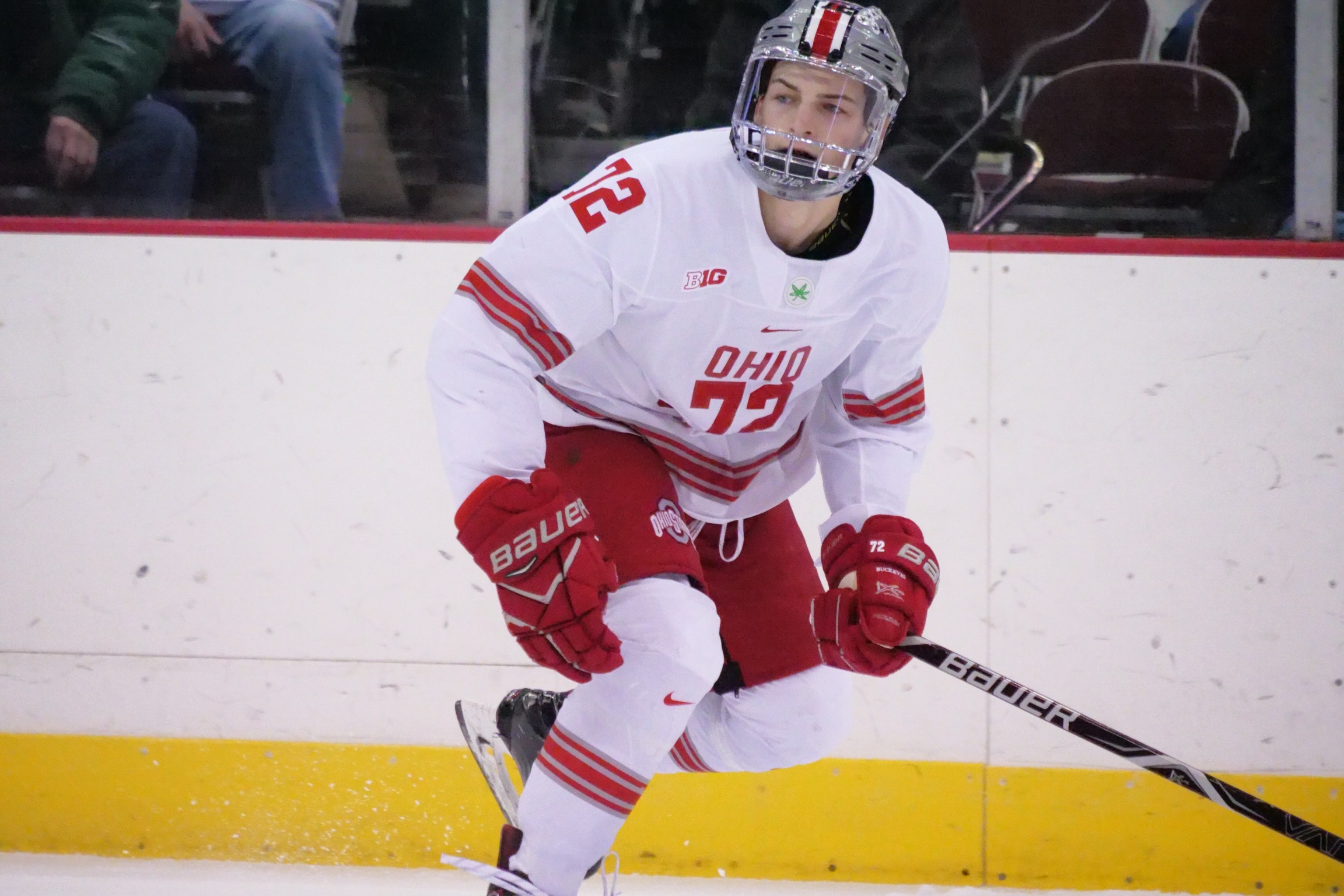 It was a disheartening lost weekend for Ohio State, which was swept at home by Minnesota following a second straight 4-3 defeat at Value City Arena on Saturday.

The No. 2 Buckeyes (19-7-4, 12-5-3-2 Big Ten) entered the series with a chance to clinch the program’s first regular-season title since 1972 when they won the inaugural season of the now defunct Central Collegiate Hockey Association.

Even after losing on Friday to end a seven-game winning streak, the Buckeyes needed a three-point win (regulation or first overtime) win on Saturday to wrap up the No. 1 seed for the conference tournament.

“I thought we got better as the weekend went on,” Ohio State coach Steve Rohlik said. “I can’t fault our effort tonight other than a couple of major blunders defensively which basically cost us. Other than that, our guys fight hard. We fought to the finish. That’s college hockey. It’s hard to win.”

Ohio State’s 41 points give it an eight-point led over second-place Minnesota with four games left. The Golden Gophers only have two games remaining so that means they can’t catch the Buckeyes.

That leaves Notre Dame and Michigan as the teams that can prevent OSU from an outright title. The Fighting Irish can max out at 43 points and the Wolverines can reach 42. The best Penn State can do is tie the Buckeyes at 41 if OSU gains no points in the final four games.

“It’s tough,” OSU senior co-captain Sasha Larocque said. “We got some luck last night with other teams winning and losing games to set us up nicely for tonight to come back and recover from a loss on Friday. It’s tough to not be able to do that with the crowd that’s here.”

Ohio State can clinch when it plays at Michigan on Friday and Saturday. The Buckeyes complete the regular season hosting Michigan State on March 1 and 2.

Looking at the big picture, the Buckeyes damaged their chances for a top seed in the NCAA Tournament like they earned last season.

Minnesota never trailed in the series and was never tied after scoring.

OSU couldn’t solve Gophers goalie Mat Robson to get the equalizer even with a late power play for the Buckeyes and a 6-on-4 when goalie Tommy Nappier was pulled for an extra attacker.

“We had a mindset that no matter what the score was we’re going to continue to battle,” Rohlik said. “Even when it got to 3-rip we still believed we were going to win the game.”

Ohio State had not lost two straight all season and had a sterling 11-1-2 record on Saturdays. Throw in the fact that sophomore goalie Tommy Nappier had the second-best goals-against in the nation (1.60) and the Buckeyes appeared to be a lock.

It took just 20 seconds into the game for the Gophers to decide otherwise. That’s when Scott Reedy completed a 2-on-0, converting a pass from Sampo Ranta.

OSU recovered and outplayed the Gophers for a long stretch after the score, but the opportunistic Gophers struck at 8:47 when Nathan Burke pounced on a loose puck in front of the goal, a reoccurring theme in the series, and flipped it over Nappier for a 2-0 lead.

Minnesota took a 3-0 lead at 6:42 of the second when Brent Gates ripped a shot from the right circle on an odd-man rush.

“We gave up four goals in back-to-back nights. We gift-wrapped a couple of goals today, especially right at the start.”

The Buckeyes finally showed some life on their first power play when Mason Jobst scored his 16th goal at 7:43 with assists to Carson Meyer and Gordi Myer.

Meyer made it 3-2 at 17:07 of the second on the power play for his eighth goal. Dakota Joshua did the dirty work below the line and got the puck to Meyer in the right circle. Defenseman Matt Miller also assisted.

OSU was buzzing in third period and had a chance to tie it but failed to connect on its fourth power play. The shots were 7-0 for the Buckeyes in the third when Minnesota scored on its first shot after Jobst turned it over in the neutral zone.

OSU went on the power play with 2:19 to play and pulled Nappier 30 seconds later but Robson was brilliant in denying the Buckeyes, who were so dominant in the third period that their 28 shot attempts equaled the number Minnesota had for the game.

OSU had 80 shot attempts in 60 minutes, but the Gophers blocked 19 shots.

“They were sacrificing. You could hear their bench every time they blocked a shot,” Larocque said.