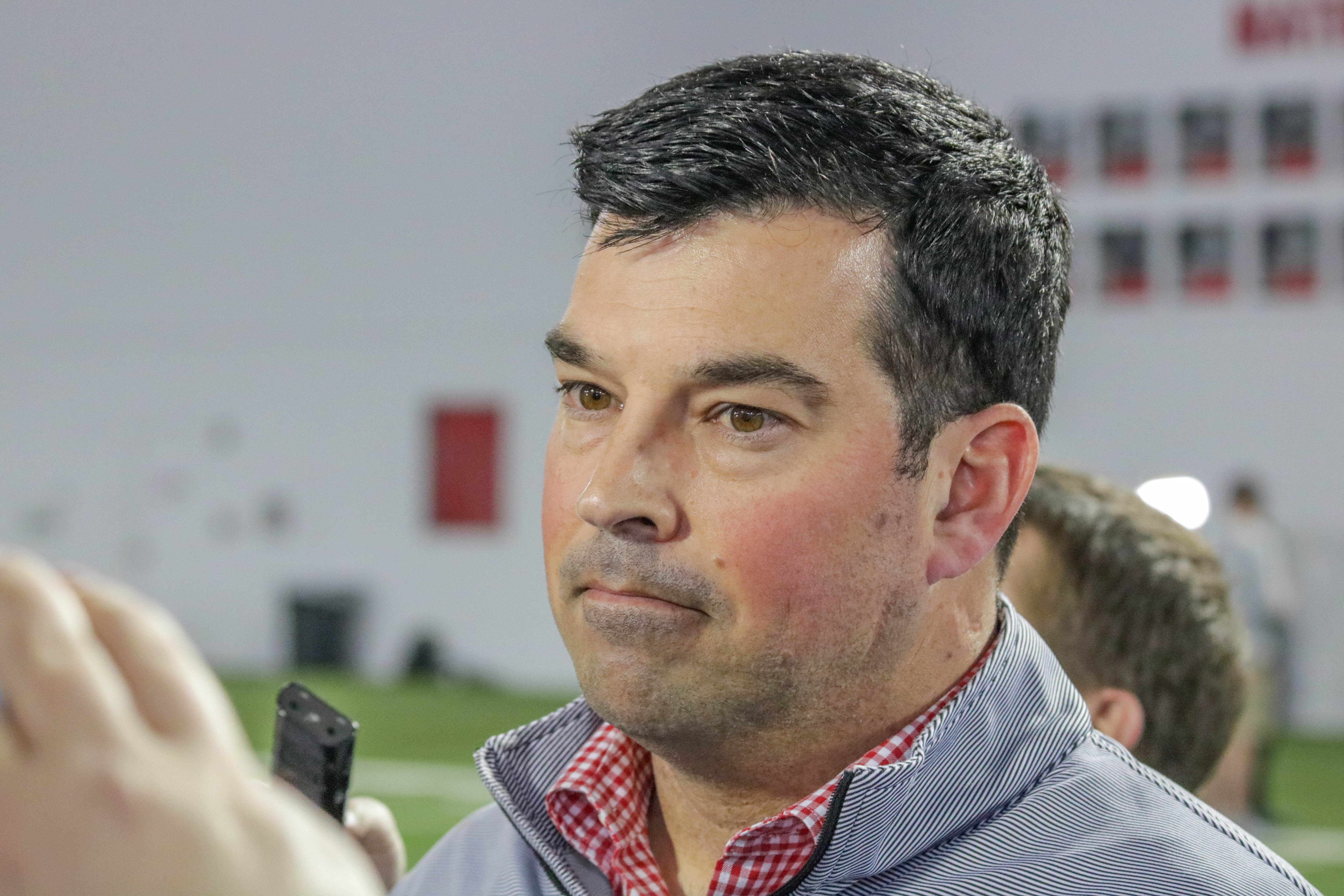 While the Buckeyes’ latest practice Wednesday at the Woody Hayes Athletic Center was closed to local media without viewing or interviews, Ohio State resumed spring camp with day 10 done.

“Well, it was busy,” Day said with a laugh Wednesday while surprising Beau Bishop and James Laurinaitis during a post-practice call on 97.1 The Fan in Columbus. “We’ve got a lot going on over here. … We just got done with an 18-period practice, we finished with two-minute (offense). Spirited practice, No. 10 of spring ball. The sun is actually out, we got some windows here in the indoor. So life’s good right now.”

As the sun starts to set on spring camp with 10 days left until the April 13 spring game, a noon kickoff at Ohio Stadium, OSU conducts four more practices, continuing Friday and concluding April 12.

“We talked to the team today about urgency and that sometimes when you’re young, you don’t realize that you’ve got to do it now — your time to step up is now,” Day said. “So we challenged the guys to have a really urgent practice — for the veterans to practice veteran, for the young guys to step up and just challenge them to think about how quickly the season can be on us and where we’d be at right now with (if) Wisconsin walked in or Michigan State walked into the Shoe right now — where would we be at? — and give them some perspective. So overall, a lot got done this morning.”

After a 7 a.m. meeting kicked off the day with linebackers coach Al Washington speaking to the team and setting the tone for practice, Day said the Buckeyes broke into their normal routine — special teams (15 minutes) and position groups (35 minutes) — as they worked through the later periods.

“To say practice 10 was the same as practice one (March 6), no, that’s not accurate,” Day said. “We’re much more efficient every day trying to analyze how every day goes, how to get better. You’ve got to motivate not only the players but coaches, the support staff — we’ve got a huge support staff here with the trainers and strength and conditioning and recruiting.

“There’s a lot that goes with that every day. So it’s kind of whole part whole. You look at it from 10,000 feet in the air and then you kind of dig in and work on the details and you take a step back and figure out, ‘OK, how can I get better tomorrow?'”

With moving parts on both sides of the ball due to departed experience from the 2018 season and new assistant coaches for the 2019 campaign, Day detailed the ongoing progress for offense and defense as “give and take” during the latest practice.

“Guys got their hands on balls,” Day said. “We had some big plays on offense. So it was more mechanical today, but the guys were competing and some of those times on defense they think they got a sack and the quarterback scrambles and then we get into an argument about that. But it was spirited, the guys were into it and it was a lot of fun.”

As co-coordinators Greg Mattison and Jeff Hafley mesh with the rest of the staff, Day said he sees a “tougher” unit overall for his retooling defense.

“We’re working on communicating better, but I do see guys who have confidence right now. They’re playing hard. They’re getting a lot tougher. I think the leadership right there from our team really needs to come from our defense. We have some guys who have been around for a while, so the challenge is for those guys to be leaders and to step up. But overall, very encouraged by what we see over there.”

“He’s got a lot going on,” Day said of Meyer. “He’s teaching a class, doing a lot of leadership stuff for the university, involved in ‘Real Life Wednesdays’ program and still around the program. He’s got his office over in (the) Fawcett (Center) and he’s staying very much involved here.

“He’s been to a couple practices, not a lot of them, but he’s been around and for me not to use him would be crazy. Not only our relationship in terms of being friends but in terms of my respect for him being a football coach, one of the best of all time — and not only just in college football but at Ohio State.”

Haskins, who was back at practice before doing a hit with Thomas for NFL Network’s “Back 2 Campus” series, went through a workout Tuesday under Oakland Raiders head coach Jon Gruden.

Before he went to Oakland and resumed his coaching career in 2018, Gruden spent 2009-17 on television with ESPN.

In addition to his primary duties as Monday Night Football’s color analyst, he had an offseason show before the NFL draft every year, “Jon Gruden’s QB Camp,” which Day said Haskins’ mental and physical testing mirrored.

“He had Gruden come in and work with him (Tuesday),” Day said of Haskins, who threw before Raiders general manager Mike Mayock among all 32 NFL teams in attendance March 20 for the Buckeyes’ pro day. “That was really cool to see. It was just like the Gruden show on TV — he’s barking at him and working him out. So it’s been fun to be a part of.”