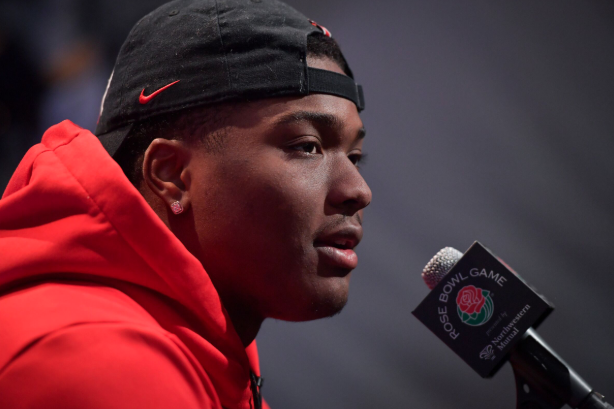 As he approaches his weekend performance at the NFL scouting combine, former Ohio State quarterback Dwayne Haskins has hit the ground running since he arrived to Lucas Oil Stadium in Indianapolis.

In an individual podium session Friday with reporters, Haskins fielded questions about his process as he prepares for Saturday’s 10 a.m. workout on NFL Network.

Unlike his counterpart in competition for becoming the first signal caller off the board — Oklahoma’s Kyler Murray (5-10 1/8, 207) told reporters Friday that he would only measure and interview at the combine, delaying any physical drills until his March 13 pro day — the 6-3 3/8, 231-pounder plans to do everything when the quarterbacks, wide receivers and tight ends take the field.

Before all 32 franchises watch Haskins perform under the microscope, the Buckeyes’ one-year starter in 2018 discussed his path to the combine when he met the media. Ahead of his Friday night meeting planned with the New York Giants, Haskins said he met the Jacksonville Jaguars, Oakland Raiders and New Orleans Saints over the previous two days.

With potential to go as high as No. 1 overall, Haskins is hopeful to stand out over Murray by the time the April 25 NFL draft in Nashville, Tenn., arrives. At the same time, though, the home-state Giants are an option Haskins has publicly expressed his desire to play for since he departed from OSU.

“Growing up in New Jersey, I grew up a Giants fan, so it’d be a dream come true,” the Highland Park, N.J., native Haskins said of playing in East Rutherford, N.J., for the Giants. “As far as going back home where my family is and play(ing) for that great franchise, a lot of really great skill players. So either way it happens throughout this process, I’m just going to be excited about being in the NFL. So of course New York would be a great spot for me.”

Prior to high school at Potomac (Md.) Bullis, Haskins came up around football in New Jersey. He spent his Pop Warner days on the outskirts of Rutgers campus with the Edison (N.J.) Jets and Somerville (N.J.) United, mentored by former Scarlet Knights star and current Atlanta Falcons wide receiver Mohamed Sanu over the years.

“It means everything, as far as him playing quarterback in high school to him making that jump to receiver in the pros and him playing really well for Atlanta,” Haskins said of Sanu, who was Monmouth Junction (N.J.) South Brunswick’s signal caller before he switched to wide receiver at Rutgers and carved his NFL career in seven seasons. “He’s given me all the tools of how to be able to learn how to work out as a pro being able to work out with him in the offseason. He’s been a great tool for me.”

With the Giants, who possess the sixth overall pick in the first round, Haskins has the pocket-passer ability and rifle-like arm to evolve New York’s offense when veteran starter Eli Manning moves on.

“I grew up watching Eli,” Haskins told ESPN. “I would learn more from him than trying to be thrown into the fire my first year. Any place that I go to, not a lot of people have immediate urgency in quarterbacks in situations. But I am a franchise quarterback. That team will be happy picking me.”

“I feel like it would be very prolific,” Haskins said of New York’s offense. “… They have a lot of great talent offensively and it would be a lot of fun.”

While former teammates Michael Jordan, Isaiah Prince and Mike Weber have already completed combine activity with the offensive linemen and running backs, Haskins throws to three of his top targets — Parris Campbell, Johnnie Dixon and Terry McLaurin — Saturday when he takes the field with something to prove as the quarterbacks, wide receivers and tight ends go through drills.

“Everybody that knows me know I’m going to put it on the money every time,” Haskins said. “So tomorrow I’m going to throw with people I haven’t thrown with in years or since college and I’m planning on completing almost every pass I throw.”