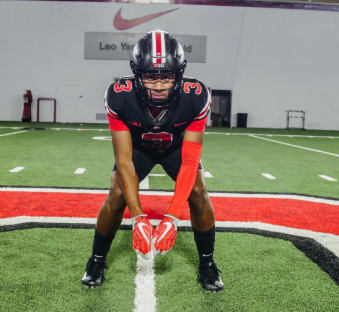 Four months after he reopened his recruitment Dec. 4, four-star defensive back Lejond Cavazos found his way home April 12 when he announced a commitment to Ohio State on the eve of its spring game.

The 6-1, 190-pounder also considered Florida, Georgia, Louisiana State, Miami (Fla.) and Oregon as finalists for the second time around.

After an offseason of reevaluation, the four-star defensive back from Bradenton (Fla.) IMG Academy recommitted to head coach Ryan Day and the Buckeyes.

Finish what I started,
COMMITTED. pic.twitter.com/N9lXLzEigm

In the wake of former head coach Urban Meyer’s retirement, the Cavazos family expressed its desire to step back and see everything through.

As they built their bond with Day, Lejond’s mother and father, CJ and Melba, grew more comfortable around the first-year head coach and assistants such as new co-defensive coordinator/secondary coach Jeff Hafley.

Cavazos first committed to OSU last June after an unofficial visit, deciding on the Buckeyes over Georgia and Oregon, among others.

As rumors of Meyer’s retirement started to swirl throughout the fall, he took his Nov. 10 trip to Georgia for its 27-10 win over Auburn, but followed up two weeks later Nov. 24 at Ohio State for its 62-39 rout of Michigan.

In the time since his decommitment, he made several visits elsewhere.

Cavazos stopped by Florida for its junior day Feb. 2, then followed with Miami two weeks later Feb. 16 before competing Feb. 17 at The Opening Regional in Davie, Fla., where he earned Combine Champion with his 133.26 rating and 4.40-second time during the 40-yard dash.

After he made his return with family for the weekend of March 23, seen connecting with Day and the Buckeyes’ coaching staff while in the Woody Hayes Athletic Center for the team’s fifth practice of spring camp — effectively sealing the deal — Cavazos took to Twitter on March 31 and set his announcement for April 12 at 6 p.m. ET.

The 247Sports composite’s No. 289 overall prospect, No. 22 safety and No. 42 player in Florida for rejoins OSU’s class and brings its commitment count to eight members for the first time.