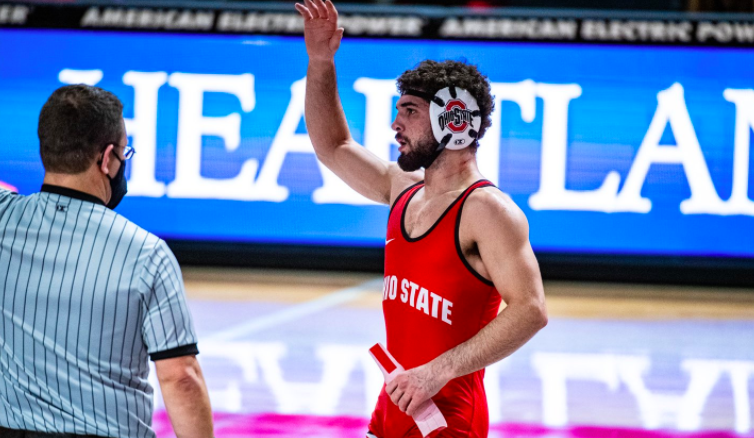 To say that Ohio State was engaged from the very start of its dual with No. 3 Penn State on Friday might be an understatement. In the first bout of the evening, after nearly five quiet minutes, 125-pounder Malik Heinselman brought his teammates – all seated mat-side in Ohio State’s Covelli Center for the first time this season – to their feet when he landed a huge takedown on Robert Howard in the final minutes of the second frame to take a 3-0 lead on the 18th-ranked Nittany Lion.

The Buckeye bench again erupted when Heinselman landed a second takedown in the final frame, enough to lock up a 5-2 victory in the first of nine ranked bouts on the evening. To knock off the unbeaten Nittany Lions, Ohio State knew it would need quite a few of those ranked bouts to go its way. It also knew that the kind of energy Heinselman’s effort elicited would need to be a constant throughout the final dual of the regular season.

While Jordan Decatur was not lacking for effort at 133 pounds against Roman Bravo-Young, he was lacking for much of a chance at pulling out an upset against the third-ranked wrestler. Bravo-Young made short work of Decatur, firing takedowns as often as he could on the way to a 27-8 tech fall victory, securing a pair of bonus points for Penn State on the team score board.

Fresh off his best win of the season against Michigan’s Drew Mattin, 141 pounder Dylan D’Emilio couldn’t keep up his form against one of the top wrestlers in his weight class. Nick Lee took a similar tact to that of Bravo-Young, chasing takedowns and allowing escapes to hunt bonus points. While not quite as successful, Lee was also able to secure bonus points for the Nittany Lions, taking a 15-3 major decision to put Penn State up 9-3 entering 149 pounds – also known as Ohio State’s opportunity to hunt points.

Unlike Penn State’s lightweight pairing, Sasso couldn’t find those points against unranked Beau Bartlett. After allowing an early takedown, Sasso kicked on the aggression, earning a late first period takedown to claim a lead that he would not look back from. However, it was not an offense-heavy affair for the Buckeye sophomore. He earned an escape point in the second period to extend his lead to 4-2, but Bartlett acquainted himself well, avoiding Sasso’s attacks and limiting the Sasso victory to a 5-3 decision.

In classic Elijah Cleary fashion, the battle at 157 pounds was as much a war of attrition as it was a wrestling bout. Unfortunately for Ohio State, it was again Cleary coming out on the wrong end of that battle, falling after a late takedown to Brady Berge, 3-1. Penn State entered halftime up 12-6.

In the battle of extremely regular names, Ethan Smith and Joe Lee opened the second half of wrestling at 165 pounds in a top 15 matchup, with Smith in a similar spot to that Sasso was faced with, hunting extra points. Smith got off to a strong start but had yet to secure any points when he rolled up on Lee’s leg in the first period. Play was paused for examination, and after a lengthy break, Lee opted to return on the mat.

Within the next minute, Smith returned Lee to the mat himself, pinning the Penn State 165-pounder to electrify the Buckeye bench and earn six crucial points for his team, knotting the match at 12.

With another shot at a huge win and the lead within Ohio State’s grasp, Kaleb Romero took the mat against Carter Starocci. After missing the last two bouts with what head coach Tom Ryan heavily implied was a COVID-related issue, Romero looked to pick right up where he left off.

It took nine minutes, but it was the Penn State freshman that took the day, earning a 2-1 decision after a tie-breaker period.

In need of an upset somewhere, 184 pounds looked as opportune a time as any for the Buckeyes, with surging Rocky Jordan up against No. 2 Aaron Brooks. No such luck however for the Buckeyes, as Brooks took care of Jordan on the way to a 13-4 major decision victory, all but ending Ohio State’s chances of winning the dual, with the Nittany Lions extended their lead to 19-12.

Things didn’t get much better at 197 pounds for the Buckeyes, with Michael Beard officially ending the dual by pinning Gavin Hoffman early in the first period, giving Penn State a 25-12 lead and officially changing the name of the school to Pin State.

To close out the regular season, Tate Orndorff fell to Seth Nevills, x-x, giving the Nittany Lions a 28-12 victory.