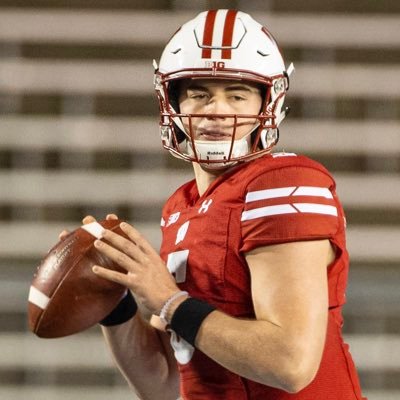 Wisconsin quarterback Graham Mertz, who set records in his first start Friday night (Oct. 23), tested positive for COVID-19 over the weekend, according to reports by the Wisconsin State Journal and the Milwaukee Journal Sentinel.

The reports said Mertz had a positive antigen test, and the redshirt freshman will take a polymerase chain reaction (PCR) test to confirm the result.

If his positive test is confirmed, Mertz would be required to miss a minimum of 21 days, per the Big Ten’s protocols for student-athletes with positive tests.

Wisconsin head coach Paul Chryst did not speak on the reports of Mertz’s positive test when speaking to members of the media Monday.

“I will not, cannot and should not, therefore, comment about anything dealing with our testing and coronavirus,” Chryst said.

The Badgers sixth-year head coach said he has no problem with the Big Ten’s 21-day policy, which is more stringent than the protocols for most other conferences regarding positive tests.

In Wisconsin’s 45-7 domination of Illinois, Mertz set school records for completion percentage (95.2 percent) and touchdown passes (five). The Badgers travel to Nebraska, host Purdue and play at No. 13 Michigan in their next three games.

“The No. 1 concern for the league, and I appreciate this, was how do we best keep everyone as safe as possible regarding the virus, and then how do you manage the impacts of it when someone has it,” Chryst said. “Admittedly, they told us it was more conservative, and if that helps one person, then that’s a good thing for us. We’ve known that there was a lot of work that went through this. For us to play, if that is something that’s in the best interest of everyone involved, then I completely support it.”

In a statement issued Sunday night, Wisconsin said it “will not be releasing COVID-related testing information regarding any individual student-athlete, due to medical privacy.”

The school did not give any specifics about tests over the weekend, but the statement said no players in the game against Illinois tested positive prior to the matchup nor reported any symptoms.

“Wisconsin Athletics continues to conduct daily antigen testing for the student-athletes, coaches and selected support staff associated with the Badger football program,” the statement read. “Individuals who receive a negative antigen test result continue to participate in team activities. Individuals who receive a presumptive positive antigen test result are removed from team activities and are required to take a PCR test to confirm positivity.”

In Mertz’s starting debut against the Illini, the highly touted signal caller completed 20 of 21 passes for 248 yards and five scores. He connected with Badger teammates on his first 17 pass attempts, tying a team record for consecutive completions.

“We talked about all week just playing with swag … I was happy that we played with a little extra chip on our shoulder and a little extra swag,” said Mertz in his postgame press conference.

Mertz became the highest-rated recruit to ever choose Wisconsin when he committed Dec. 19, 2018, ranked as the No. 3 pro-style quarterback and No. 65 overall prospect nationally, per 247Sports’ Composite rankings. The Mission (Ks.) Blue Valley North product was the No. 1 pocket passer and No. 21 overall recruit in the 2019 class, per ESPN.

Third-year sophomore Chase Wolf would be expected to take over at quarterback for Wisconsin if Mertz must miss time, considering returning starter, senior Jack Coan, is out indefinitely while recovering from foot surgery.

Wolf was the No. 39 pro-style quarterback and No. 1,016 prospect regardless of position in the 2018 class. The former three-star came to Camp Randall out of Cincinnati St. Xavier.

The only other quarterbacks on the Badgers roster are fourth-year junior Danny Vanden Boom and 6-foot-8 freshman Daniel Wright. Vanden Boom was the No. 68 pro-style quarterback and No. 1,859 overall recruit in 2017, while Wright walked on in 2020.