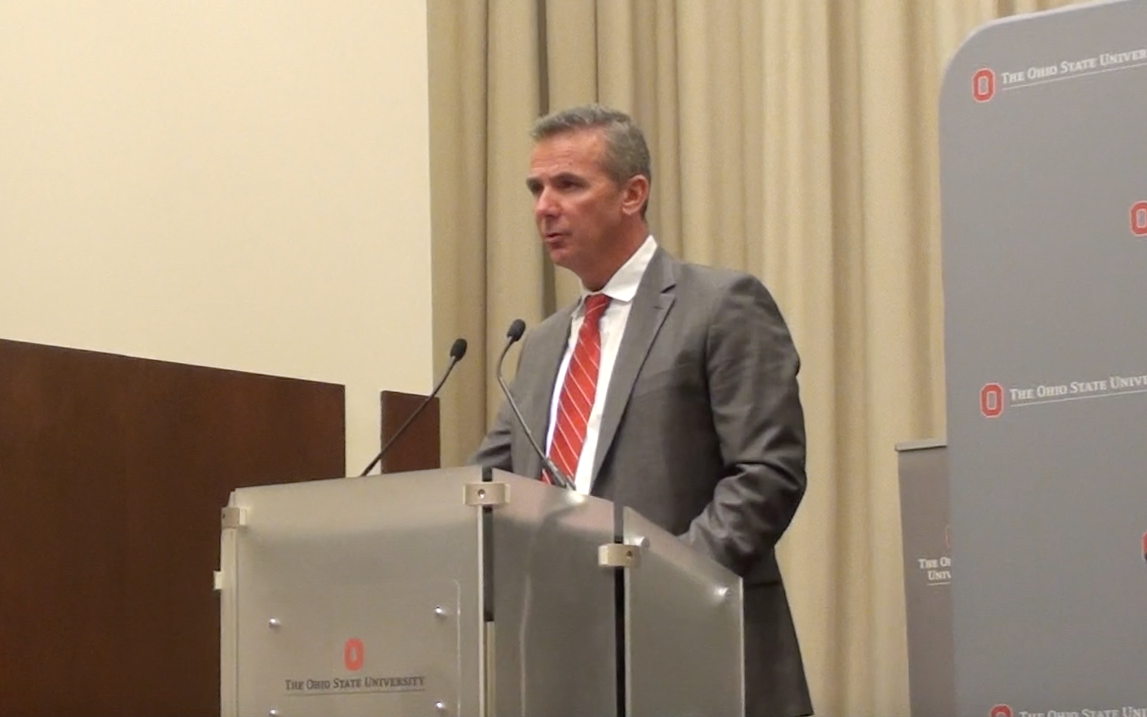 Ohio State head football coach Urban Meyer released a statement Friday morning and clarified why he was suspended by the university after its independent investigation.

While the 23-page summary report laid out what the six-member committee found after its investigation, Meyer reiterated exactly why he received his disciplinary action.

“While I stand by my apologies to Courtney Smith, her children and everyone else, there have been a number of things reported in the media about President Drake’s decision and the Investigative Team’s Report that have not been correct and must be clarified.

“First, I was not suspended because I knew about or condoned Zach Smith’s alleged domestic abuse.

“On domestic violence, here is what the Lead Investigator stated at the Press Conference: “Overall, Coach Meyer impressed us with a sincere commitment to the Respect for Women core value that he espouses and tries to instill in his players.

“On domestic violence, here is what the Investigative Report concluded: ‘We believe [Coach Meyer], as did Zach Smith, that if [Coach Meyer] ever came to learn or believe that Zach Smith had ever physically abused his wife, Coach Meyer would have fired Zach Smith or any other head coach on the spot.’

“President Drake expressly stated the reason for Coach Meyer’s suspension at the August 22, 2018 Press Conference: ‘Based on the independent investigation, I want to state clearly that we believe Urban Meyer did not and does not condone domestic abuse. However, he did fail to take sufficient management action regarding Zach Smith and he was not as complete an accurate at Big Ten Media Days and did not uphold the high standards and values of the university on that day. Therefore, Urban Meyer is suspended through September 2nd, 2018, and for the games on September 1st, 8th, and 15th.’

“Second, as the report found and President Drake said, I did not lie at Big Ten Media Days.

“Regarding Big 10 Media Days, the Investigative Report Found: ‘And we credit that Coach Meyer, in answering reporters’ questions on July 24th was closely focused on erroneous reports that Zach Smith had been arrested on felony charges in 2015 which Coach Meyer had determined the night before not to have occurred. But his answer swept more broadly than the falsely reported arrest and Coach Meyer falsely stated he lacked knowledge of all relevant events regarding alleged domestic violence by Zach Smith in 2015. While those denials were plainly not accurate, Coach Meyer did not, in our view, deliberately lie.’ ‘[W]e do not find that Coach Meyer’s misstatements on Big Ten Media Days were part of a deliberate cover-up for keeping Zach Smith on the coaching staff in the face of evidence of domestic violence by him that Coach Meyer or others in the Athletics Department credited. . . . He clearly misspoke and made misstatements, but the reasons that happened are complex. Coach Meyer did not, in our view, deliberately lie.’

“Third, my fault was in not taking action sooner against a troubled employee about his work-related issues.

“Regarding my management of Zach Smith, the Lead Investigator stated: ‘The investigation identified multiple other examples of inappropriate conduct by Zach Smith while employed as an assistant football coach, some known by Coach Meyer and/or Gene Smith and others on the football staff. Coach Meyer and Athletic Director Smith’s efforts to help Zach Smith overcome his personal issues went too far in allowing him to remain as an employee in the face of repeated misconduct.”