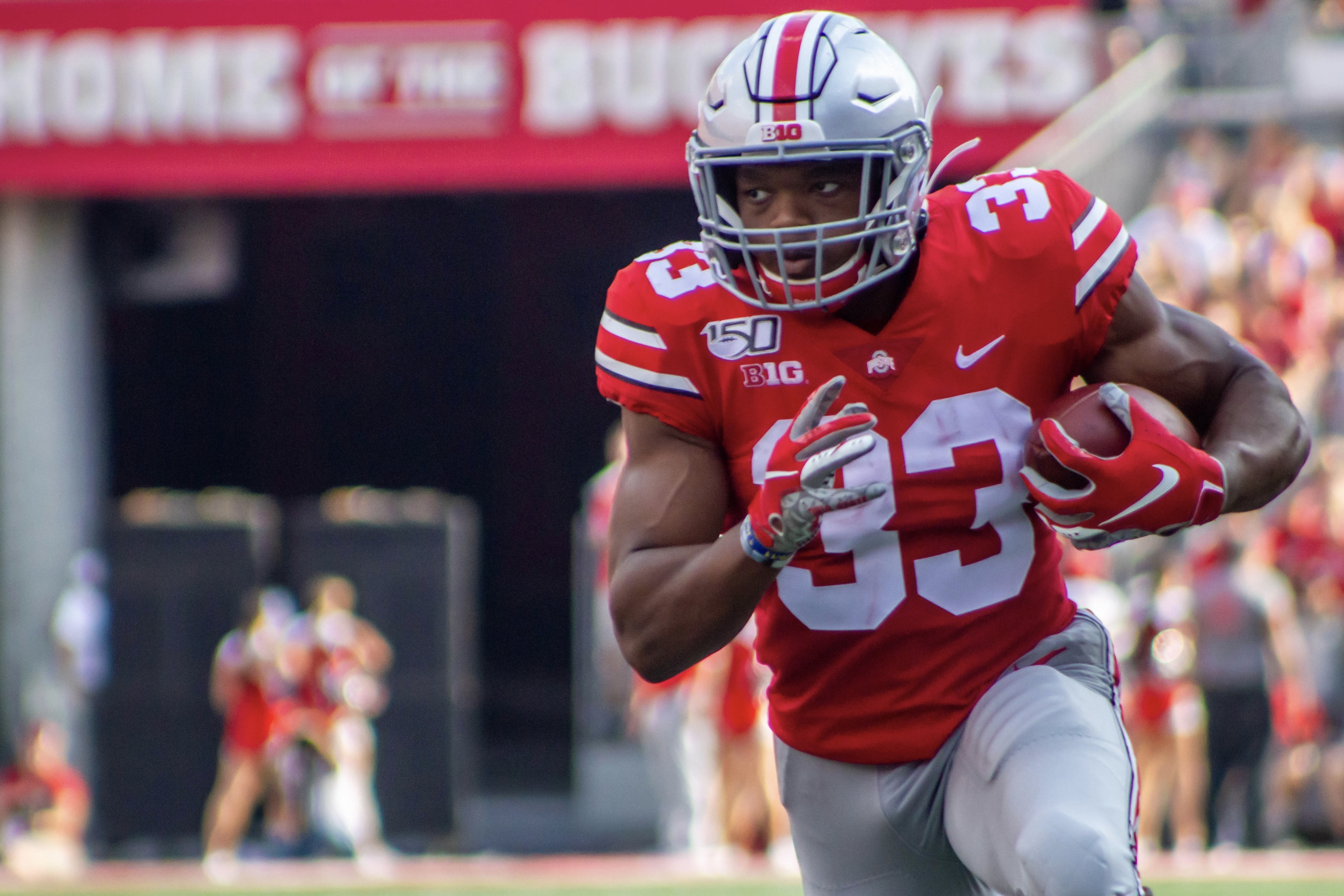 Even though Ohio State lost four full-time starters on the offensive line and a 1,000-yard back in Mike Weber, head coach Ryan Day and offensive coordinator Kevin Wilson insisted the Buckeyes could be better in the running game.

The Scarlet and Gray did not enjoy the success they expected in their season-opening 45-21 win against a weaker Florida Atlantic, rushing 48 times for 237 yards and two scores for a 4.9-yard average per carry.

Correcting some of the mistakes from game one, Ohio State ran for 270 yards and four touchdowns on 46 totes for a 5.9 average against a tougher Cincinnati defense in a 42-0 rout.

Continuing to improve as a rushing offense, the Scarlet and Gray put up 306 yards and three touchdowns on 42 attempts against Indiana. Ohio State averaged a tremendous 7.3 yards per carry in the 51-10 shellacking of the Hoosiers.

Fields, who has 150 yards and six scores via the ground game, liked what he saw from the team’s rushing attack at Indiana.

“It’s crazy,” Fields said after the Buckeyes’ success on the ground against Indiana. “The O-line did a great job today and that’s definitely going to make us more dangerous in the future when we play more Big Ten games. Just having the running game there to pick me up and carry the team, that was great to see.

“It makes the offense flow, so if we can keep it going, that would be a great thing. It definitely makes my job easier as a quarterback.”

Ohio State likely could have enjoyed more success on the ground against Miami (Ohio), but Fields and Co. could get whatever they wanted against the RedHawk secondary, throwing for a season-high 374 yards and seven touchdowns as a team. Even with the explosive passing outing, the Buckeyes ran for 227 yards and four touchdowns on 42 rushing attempts (5.4 average) in their 76-5 demolition of Miami.

Despite losing four starters to the offensive line of the most prolific offense in Ohio State history, Wilson and the coaching staff see something in the 2019 Buckeyes that gives them confidence. Wilson made sure to praise offensive line coach Greg Studrawa, as Day often does, for his development of the big men up front.

“We’ve always had some talented guys,” Wilson said. “This group is physically, and the way they’re wired, a little harder. There’s still some things once in a while that aren’t as clean or as perfect as you want, but they play hard. They battle and fight and scratch, and Stud’s doing a great job with them. Guys are buying in, backs are running hard, tight ends complement it. It’s a good-attitude group.

“We’ve got to keep building on it. Hopefully we’re just starting. It doesn’t mean you’re going to get more yards, but tough yards, hard yards, and keep them healthy and keep them running hard.”

Hitting the hole hard and finishing runs with authority have been staples of the Scarlet and Gray ground game, led by junior running back J.K. Dobbins and redshirt freshman tailback Master Teague, who has excelled in Weber’s role.

The two-headed monster of Dobbins and Teague proved to be a force to be reckoned with in Ohio State’s showdown with Indiana in Bloomington. Dobbins rushed for 193 yards and one touchdown while Teague tailed 106 yards and a score against the Hoosiers, earning rave reviews.

“They both ran hard,” Day said of Dobbins and Teague. “We’re going to see some things on film with J.K. that were really good, maybe a stiff arm and a few things that were really good. We’re going to see Master running through again, two weeks in a row, where there’s contact made and he’s falling forward for four yards, and that makes a huge difference. There were holes there, and contact wasn’t being made at the line of scrimmage; it was downfield, so tribute to the O-line on that one.”

While also giving kudos to the Ohio State offensive line, Dobbins praised the unit’s efforts and shared some insight into the cohesion he has with the guys who help make him look good and keep him healthy.

“I just told them I’ll meet them in the end zone, and I think that gets them excited,” Dobbins said of his offensive line. “All those guys, I love those guys; I love them like my own brothers. I think that helps us. We have a great bond.”

Dobbins looked like the explosive back he was as a freshman when he rushed for 1,403 yards on a 7.2-yards-per-tote average, earning Freshman All-American honors.

A Murfreesboro (Tenn.) Blackman product, Teague, has done an excellent job complementing Dobbins in the run game. The redshirt freshman, who missed most of fall camp due to injury, totaled 249 rushing yards through four games, good enough for sixth in the Big Ten.

Teague is averaging an excellent 6.2 yards per carry, particularly for a powerful back, and has accumulated 266 yards from scrimmage and one touchdown. Day has enjoyed the way the tailback duo complements each other.

“Master’s fast; he’s a big guy, but when he runs and gets behind his pads, he’s a load,” Day said of Teague. “Of course, J.K.’s got great vision, great feet in the hole. They’re different but they’re both doing really well. Hopefully we’ll keep it going.”

Running the football has been a staple of the Buckeyes’ dynamic dual-threat offense, which ranks third in the nation in scoring (53.5 points per game) and No. 14 in total offense (526.5 yards per game).

Ohio State will face its biggest test yet Saturday in Lincoln against Nebraska, who allows only 116.8 yards per game on the ground, which is tied for No. 40 in the country.

The Buckeyes should be able to rely on their toughness and the tandem of Dobbins and Teague to impose their will on the Huskers in the primetime Big Ten showdown.

Share the link below with fellow Buckeye fans and they can receive the next four print editions for free along with unlimited access to the BuckeyeSports.com during the trial period.