Transfer Tracker: Reviewing Those From Ohio State’s 2016 Recruiting Class Who Have Transferred 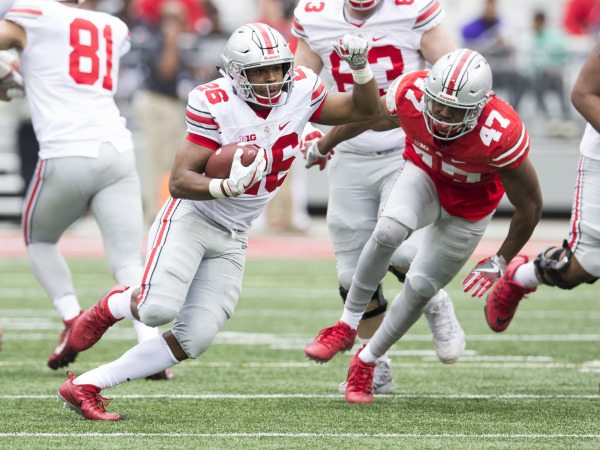 Buckeye Sports Bulletin continues its series of reviewing how players who have transferred out of the Ohio State football program during the Urban Meyer era have fared at their new landing spots, starting with the 2012 recruiting class, Meyer’s first at OSU.

What follows is a player-by-player breakdown of those who signed with Ohio State in the 2016 recruiting haul and eventually transferred elsewhere, listed in alphabetical order.

Burns was a longtime Louisville commit before flipping to Ohio State late in the recruiting process. He appeared in seven games at cornerback as a true freshman for the Buckeyes in 2016 and returned an interception for a touchdown in the season opener against Bowling Green. He also made one tackle.

In May 2017, Burns, a Louisville, Ky., native, announced he was retuning home to play for the University of Louisville. He had to sit out the 2017 season due to NCAA transfer rules and will have three years of eligibility left starting in 2018.

Another former Buckeye returning to his home state is Davis. From Norfolk, Va., Davis tweeted on May 30 that he was transferring to James Madison, which is located in Harrisonburg – a three-plus hour drive from Norfolk.

Davis will be able to play immediately for James Madison, which won the FCS national title two years ago and was the runner-up last year.

A product of Lake Taylor High School in Norfolk, Davis redshirted his first year at Ohio State in 2016 and did not see any action last season.

Davis was a four-star recruit coming out of high school and was rated the No. 335 overall prospect and No. 33 cornerback in the 2016 class, according to the 247Sports composite. He announced on May 10 that he was leaving Ohio State.

Felder has had quite the journey. He signed with Ohio State’s 2016 recruiting class but did not enroll at the school, as the Buckeyes announced in May 2016 that Felder would not be attending OSU that fall.

Prior to the 2016 season, Felder transferred and enrolled at Toledo. He then transferred to Rutgers in the summer of 2017 and did not see game action last fall. The Baltimore native has three years of eligibility remaining for Rutgers and Scarlet Knight head coach Chris Ash, who was the Buckeyes’ co-defensive coordinator and secondary coach when Felder originally chose Ohio State.

That’s not all, though. In addition to the transfers, Felder changed his name to Tre Avery.

On March 6, 2017, an Ohio State spokesman confirmed to BSB that Gerald had left the program.

Gerald, who redshirted his first year at OSU, joined the Buckeyes as a four-star prospect and early enrollee out of Bradenton (Fla.) IMG Academy, though he is originally from Portsmouth, Ohio.

The news of Gerald’s departure was first reported by The Columbus Dispatch. Meyer said Gerald “just quit” and added that he wasn’t sure what led to the player’s departure.

It is not clear where Gerald decided to transfer.

After redshirting the 2016 campaign as a true freshman, Hawkins did not play a snap in Ohio State’s first 13 games of 2017 before announcing in December he was transferring to Youngstown State.

A four-star recruit out of Maple Heights, Ohio, Hawkins will be able to play immediately for the FCS program, coached by Bo Pelini, who was a team captain and four-year letterman as a safety at Ohio State from 1987-90.

Hawkins, who missed time during Ohio State’s spring practice last year for academic reasons, was one of three tight end recruits who signed with OSU in 2016, the other two being Luke Farrell and Jake Hausmann.

Williams, a native of New London, N.C., also is returning to his home state when he arrives at North Carolina, which officially announced his transfer on April 24.

The 5-11, 210-pound Williams joined OSU as a four-star recruit. Rated by the 247Sports composite as the No. 169 overall player and No. 7 running back, Williams pledged to the Buckeyes in 2015 after originally committing to the Tar Heels in 2013 and Wisconsin in 2014.

He played in two games for Ohio State as a freshman in 2016, tallying six carries for 28 yards. As a sophomore last fall, he managed 57 totes for 290 yards and three touchdowns in 12 games while playing behind J.K. Dobbins and Mike Weber, both of whom are back for Ohio State in 2018.

Wohlabaugh was a three-star prospect out of Walsh Jesuit High School in Cuyahoga Falls, Ohio. He redshirted his first year at Ohio State in 2016 and did not see any playing time last season.

Wohlabaugh announced Jan. 4 his intentions to transfer to Duke. The 2017 Academic All-Big Ten selection will sit out the 2018 season due to NCAA transfer regulations and have two seasons of eligibility beginning in 2019.