Transfer Tracker: How Transfers Have Fared After Leaving Ohio State 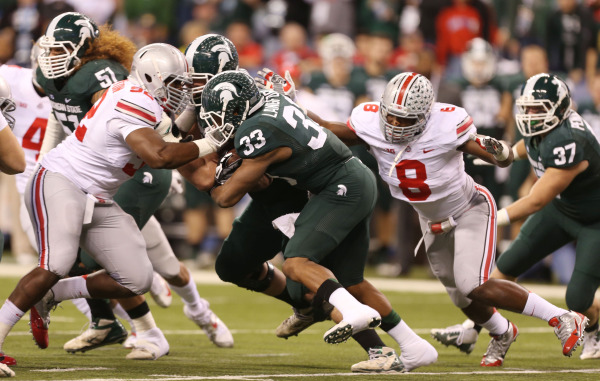 Joe Burrow is off to LSU in hopes of landing the starting quarterback job there.

He becomes the sixth player to announce his transfer out of Ohio State since the end of the 2017 season. The five others are offensive linemen Matthew Burrell (Sam Houston State), Kevin Feder (undecided), Jack Wohlabaugh (Duke), defensive lineman Dylan Thompson (Virginia) and running back Antonio Williams (North Carolina).

With the half-dozen departures, BSB has decided to start a series in which we look back at those who have signed a letter of intent to Ohio State with Urban Meyer as head coach and have later transferred out of the program. We’ll start with Ohio State’s 2012 recruiting class, Meyer’s first at OSU, and move forward in chronological order.

What follows is a player-by-player breakdown of those who signed with Ohio State in the 2012 recruiting cycle and eventually transferred elsewhere, listed in alphabetical order.

A local product, Ball prepped at Columbus DeSales High School while becoming the second player of the 2012 class to commit to Ohio State.

After the 2015 campaign, Ball left for Akron as a graduate transfer. He is one of three players on this list who transferred to the MAC school. He started two games in 2016, gaining 181 yards and one touchdown on 25 carries, before suffering his first of two season-ending injuries with the Zips. Ball was granted a medical hardship in 2016, giving him a sixth year of eligibility for 2017. He started the first five games last fall, running for 332 yards and four touchdowns on 75 attempts, before breaking his ankle against Bowling Green on Sept. 30.

Epitropoulos committed to Ohio State in April 2011, before former OSU head coach Jim Tressel resigned in the wake of Tattoo-Gate, a scandal in which a select group of players sold their Ohio State memorabilia for tattoos in 2010-11.

After redshirting as a true freshman in 2012, Epitropoulos played in four games in 2013, including his first action as a Buckeye with 28 plays from scrimmage against Florida A&M. Later that year, he recorded his first-career catch, a 6-yard reception, in a 56-0 win over Purdue.

The Upper Arlington, Ohio, native left the Buckeyes in August 2014 to focus on academics and ultimately transferred to Michigan State as a walk-on in 2015. He suffered an injury in the preseason camp leading up to the 2015 campaign, though, and did not see any game action that year. As a fifth-year senior in 2016, Epitropoulos appeared in six games for the Spartans and logged one tackle.

Like a few on this list, Marcus earned most of his playing time on special teams as a true freshman at Ohio State in 2012. He also started against Clemson in the Orange Bowl following the 2013 regular season in place of the suspended Noah Spence, recording six tackles and one pass breakup.

That was the last time Marcus donned the scarlet and gray, however, as he transferred to Akron before the 2014 season. After sitting out that fall, Marcus played in 11 games for the Zips in 2015, compiling 30 tackles and 12½ tackles for loss. Injuries somewhat limited his senior season of 2016, as he appeared in seven contests and had 16 stops (6½ TFL).

Following his collegiate career, Marcus remained in northeast Ohio by signing with the Cleveland Browns as an undrafted free agent in May 2017. A foot injury resulted in him being released by the Browns in early August of that year.

He is attempting to get his professional career off the ground by participating in this year’s version of the The Spring League, a two-week camp that provides potential NFL-talent the opportunity to perform in front of NFL scouts while also further developing their skills.

Murray made an immediate impact as a freshman at Ohio State, playing primarily on special teams in the first six games of the 2012 season. He tore his ACL in practice, though, thus ending his year.

Hoping to have a bounce-back campaign, Murray was suspended indefinitely and later dismissed from the team in 2013 for a violation of team rules.

He transferred to Kent State in 2013 and actually played against his former teammates in 2014, registering four tackles in a 66-0 win by Ohio State. In three seasons with the Golden Flashes, the Steubenville, Ohio, product tallied 100 tackles and two interceptions.

O’Connor was originally committed to Penn State but switched to Ohio State after the Jerry Sandusky scandal broke.

O’Connor redshirted his first year at Ohio State in 2012, when he sustained a knee injury that required surgery. After one year in Columbus, the Windsor, Colo., native decided to transfer back to his home state and play for Colorado State.

O’Connor had to sit out a year due to NCAA transfer rules but never returned to the gridiron. He had another surgical procedure on the knee while sitting out and eventually decided to give up football.

Similar to O’Connor, Perkins was initially committed to another school (Notre Dame) before signing with the Buckeyes.

Perkins appeared in nine games as a true freshman for Ohio State in 2012, primarily playing on special teams and totaling six tackles. His biggest hit, however, occurred in spring practice in 2013, when he flattened OSU mascot Brutus Buckeye.

In May 2013, Perkins was arrested during a visit to Bowling Green for allegedly breaking into a car and attempting to enter a female stranger’s home while drunk early one morning. He was charged with misdemeanor counts of criminal trespassing, criminal mischief, criminal damaging and underage drinking. Days after the incident, Meyer confirmed that Perkins was no longer a member of the team.

Perkins ended up transferring to Illinois State, where he played in 38 games across three seasons. While with the Redbirds, the Indiana native had 154 tackles, 20½ sacks, six forced fumbles, one fumble recovery and one interception.

Perkins signed with the Seattle Seahawks as an undrafted free agent following the 2016 NFL draft but was waived as part of the club’s final roster cuts prior to the 2016 campaign. He then signed with the British Columbia Lions of the Canadian Football League in January 2017.

A product of Canton (Ohio) McKinley, Pittman flipped from Michigan State to Ohio State in December 2011. Pittman redshirted in 2012 after he suffered a knee injury in spring practice. He then requested his release in March 2013 and wound up at Akron.

After sitting out the 2013 season due to transfer rules, Pittman was a three-year starter for the Zips. He appeared in 33 career games for Akron and had 91 tackles, including 12½ TFL and three sacks.

Last spring, Pittman signed as an undrafted free agent with the Tampa Bay Buccaneers but didn’t survive the roster cuts.

Roberts only spent one year in Columbus before transferring to Harvard in the summer of 2013.

A native of Lancaster, Ohio, Roberts played in seven games for the Crimson in 2014-15, collecting three tackles.

He has no stats after the 2014-15 season, so he could have possibly dropped football to focus on his studies at the Ivy League school.

Southward committed to Ohio State the day before the university announced the hiring of Meyer. Southward redshirted in 2012. He transferred from OSU in early October 2012 due to personal reasons before landing at Arizona Western College, a junior college.

Hailing from Lakeland, Fla., Southward played in just two games for Arizona Western College in 2014, notching five receptions for 118 yards and one touchdown.

He then signed with Colorado Mesa, a Division II program, in February 2015 but did not appear in any games over the next two seasons.

Arguably the most talented player in Ohio State’s 2012 recruiting class, Spence had a very disappointing end to his OSU career. The Harrisburg, Pa., native played extensively during his first two years in Columbus, appearing in 24 games total between 2012 and 2013 and accruing 64 tackles, 15½ TFL and nine sacks.

Drugs, however, crippled his career as a Buckeye. He was declared permanently ineligible by the Big Ten Conference after he tested positive for ecstasy on two different occasions.

In two years with the Buccaneers, Spence has played in 22 games, six of which he has started, and has amassed 21 tackles, 6½ sacks and four forced fumbles.