The Endless Saga Of C.J. Stroud And Running The Football 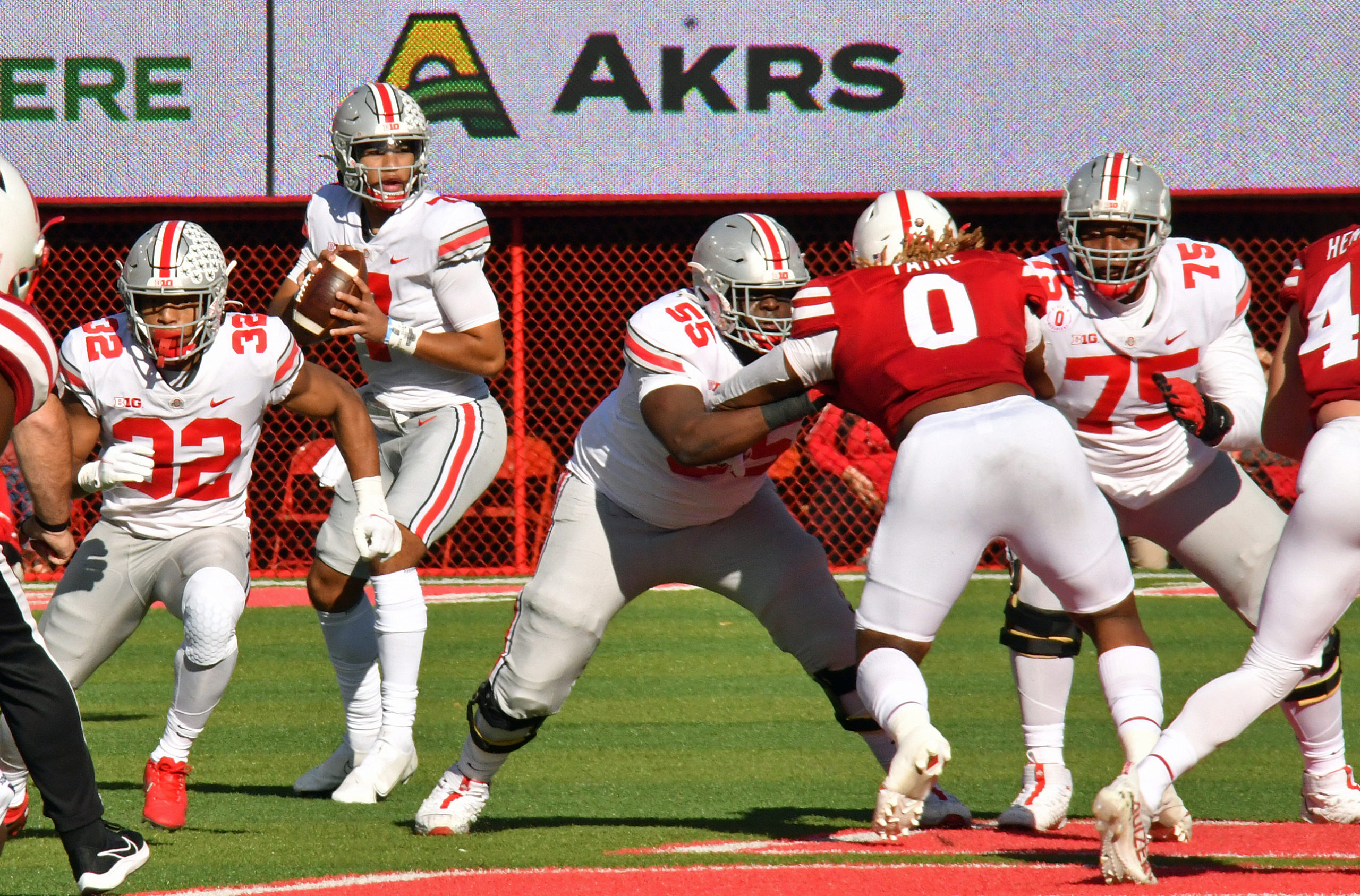 C.J. Stroud is constantly under a microscope as quarterback for The Ohio State University. He is the leader of a historically dominant college football program and is the primary player tasked with continuing the program’s long-lasting success.

Through his first eight starts, Stroud mostly met the expectations set by coaches and fans, especially in the passing game. He is an above-average thrower, completing 67 percent of his passes for 2,675 yards, 25 touchdowns and five interceptions.

Stroud ranks sixth nationally with .342 Expected Points Added (EPA), according to CFBGraphs. EPA is a metric derived using a model that breaks plays into down, distance and yard line bins, estimating the actual points a player adds to their respective team from each state.

Stroud’s passing ability and statistical accumulations help him create a strong resume among college football’s best quarterbacks despite playing one fewer game than his counterparts.

His success would indicate a positive response from media members and fans. While that is mostly the case, there’s been a question Stroud has faced more than any other this season: Why doesn’t he run the ball more?

With the exclusion of sacks, Stroud has 14 carries for 70 yards in 2021, and he’s never tucked the ball and ran more than three times in a single game. He looks apprehensive about using his legs out of the backfield — something Ohio State quarterbacks were known for in the days of Braxton Miller, J.T. Barrett and Justin Fields — and decides to force throws downfield to make a play.

When asked why he doesn’t run the ball more often, Stroud said that he would run under the right circumstances and mentioned that he is trying to run the plays head coach Ryan Day and offensive coordinator Kevin Wilson call for him.

“I mean, if it’s there, I’m gonna run. I feel like I do a good job running. But the plays that we call, I’m gonna run them to the best ability,” Stroud said after Ohio State’s Oct. 30 win over Penn State. “I’m not gonna go and do my own thing. That’s how you lose games.”

According to Wilson, Ohio State doesn’t call many designed runs for its quarterback, primarily to maintain Stroud’s long-term health. The redshirt freshman signal-caller separated the AC joint in his shoulder during the season opener with Minnesota. He appeared to suffer the injury after he landed awkwardly during a scramble early in the game.

“Quite honestly, there’s always the run option for him in some games, but with the shoulder the way he had it, we were trying to minimize some hits, risk and reward,” Wilson said Tuesday. “He’s a very capable runner. I just think coming off the shoulder that he had early, we just try to be smart.”

Even if Stroud hadn’t injured his shoulder, Day said an Ohio State quarterback’s primary focus is to throw the football. While he understands the significance of having Stroud be a dual-threat player, he wants the Rancho Cucamonga, Calif., native to utilize his passing ability more than his running ability.

“Guys have run here before, and when it’s appropriate, we do. But also, it’s clear that we don’t run it as much as some of the other places. And I tell people that in recruiting. We’re not gonna come here and just run you into the ground,” Day said Tuesday. “It’s a long season. And we’ve got really good players on offense. So when the time is right and we need to do it, we gotta do it. But at the same time, putting our guys at risk for a long season is not something we do here. And I believe strongly in that. That quarterback position is a very important position.”

Still, Day admitted that there would come a time where Stroud needed to tuck the football, put his head down and use his legs to battle for a few yards. Day said he will leave the decision to pass or run in his quarterback’s hands and, until this point, believes he’s done a fine job discerning between the two.

“It’s hard to tell somebody what to do in those situations because if you do, it won’t be the same situation as it was that time the next time. So you have to trust your instincts. And I think he’s doing a very good job of that,” Day said. “He keeps his eyes upfield. I think there are times where if he can make three or four yards and keep us on schedule, then he can do that. He’s done that before. And that’s just part of playing the game and getting a feel for it and managing the game. There are times where he’s skated and extended routes and pushed the ball down the field and made some really good throws as well. So that’s just feeling the game and understanding where we are in the game. But keeping us on schedule again is something that we’re really hitting on this week.

“That’s all part of playing the position. I played the position, so I know it’s not easy. You can tell somebody what to do in the moment, but you have to trust your instincts. But I think the more he plays, the better he’s gonna feel in those spots and the more confident he’ll be.”

With three challenging games ahead for the Buckeyes, including matchups with No. 19 Purdue, No. 7 Michigan State and No. 6 Michigan, Day and Wilson said Ohio State would need to be ready to do whatever it takes to win games. If that means Stroud needs to run the football, then they will expect him to do that.

“As these games get a little bit tighter down the stretch, there’s gonna be some great competition every week and games are close,” Wilson said. “Those critical scoring zone situations, third-down situations, we gotta incorporate every player.”