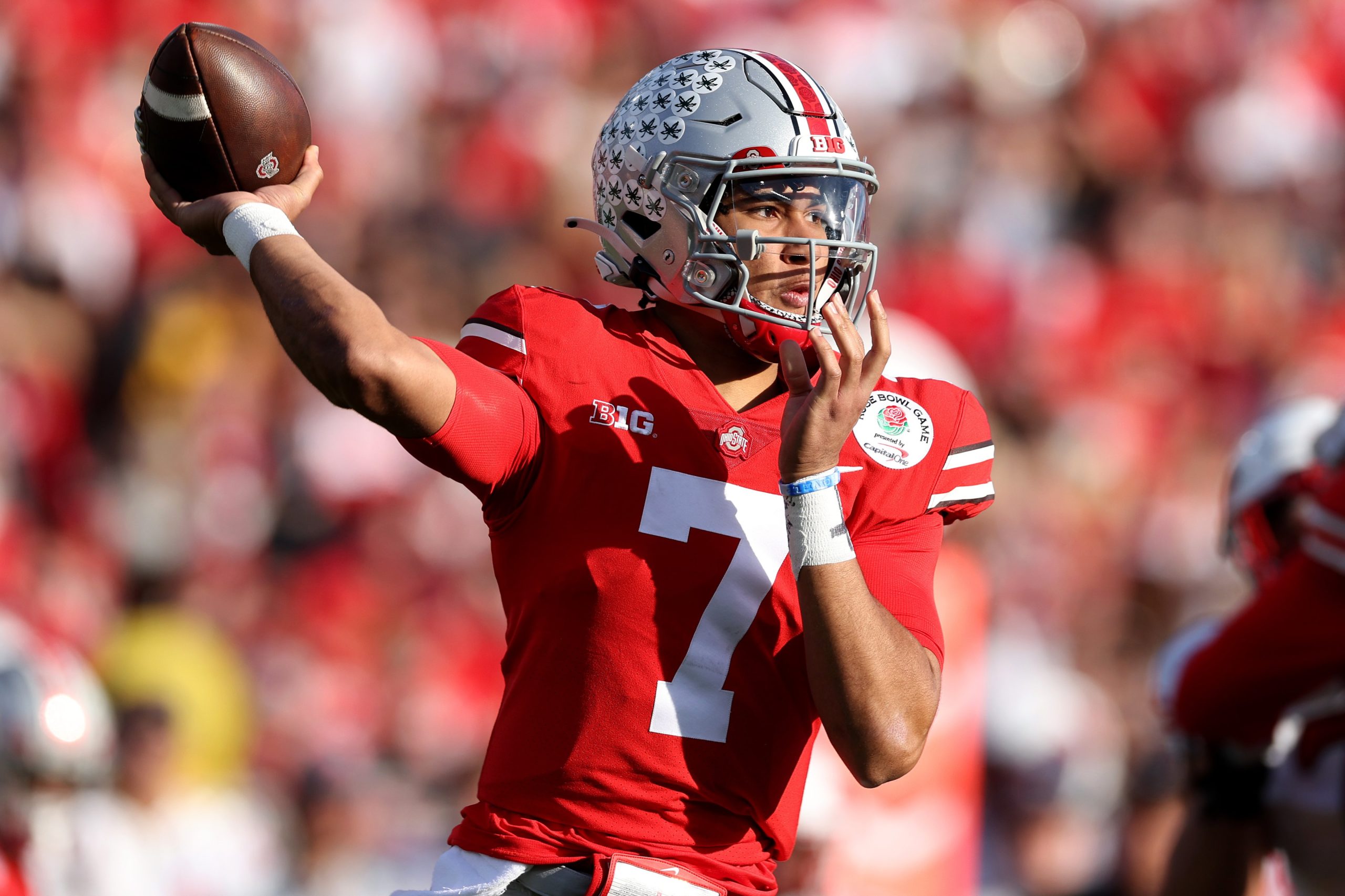 After the 2022 NFL Draft ended, many analysts turned to 2023 and released their first versions of way-too-early mock drafts. In those 32-pick compilations, several experts chose Ohio State quarterback C.J. Stroud as their No. 1 overall selection and placed wide receiver Jaxon Smith-Njigba in their top 10.

Stroud is a consensus top-three pick in the 2023 NFL Draft, according to all eight mock drafts. His size and arm talent make him an appealing option for teams in need of a quarterback, and there will be several franchises with that hole at the top of the draft.

THE ATHLETIC – NO. 1 OVERALL TO THE HOUSTON TEXANS

“The most impressive quarterback prospect I saw last season was Stroud, who made substantial strides with each game as a redshirt freshman,” NFL analyst Dane Brugler said. “There is no question he benefits from Ryan Day’s play-calling and the elite talent around him, but Stroud still needs to make the throws, and his understanding of anticipation and touch make you sit up in your seat.”

BLEACHER REPORT – NO. 2 OVERALL TO THE ATLANTA FALCONS

“Stroud gets the slight nod over the reigning Heisman Trophy winner, Alabama’s Bryce Young, simply because the former has a bigger frame and more upside as he continues in his development,” NFL analyst Brent Sobleski said. “The reigning Big Ten Offensive Player of the Year is well-worth this selection after finishing top-five last season in completion percentage (71.9), passing yards (4,435), touchdown passes (44) and quarterback rating (186.6).”

YAHOO! SPORTS – NO. 1 OVERALL TO THE HOUSTON TEXANS

“If the Texans are picking this high, the Davis Mills experiment has likely failed after a second season,” NFL analyst Luke Easterling said. “Stroud has all the tools to be a franchise quarterback and next year’s No. 1 overall pick.”

CBS SPORTS – NO. 3 OVERALL TO THE DETROIT LIONS

COLLEGE FOOTBALL NEWS – NO. 1 OVERALL TO THE HOUSTON TEXANS

FOX SPORTS – NO. 1 OVERALL TO THE HOUSTON TEXANS

NBC SPORTS – NO. 1 OVERALL TO THE HOUSTON TEXANS

247SPORTS – NO. 1 OVERALL TO THE HOUSTON TEXANS

Smith-Njigba is the first wide receiver off the board and a consensus top 10 pick in the 2023 NFL Draft, according to all eight mock drafts. He’s proven to be a game-wrecker even in a crowded position room with Garrett Wilson and Chris Olave — the No. 10 and No. 11 picks in the 2022 NFL Draft, respectively.

THE ATHLETIC – NO. 8 OVERALL TO THE NEW YORK GIANTS

“Ohio State had a pair of wide receivers drafted in the top 11 picks in the 2022 NFL Draft and could have another one next April,” Brugler said. “Smith-Njigba has only average size and might not run in the 4.3-second 40-yard dashes like either Garrett Wilson or Chris Olave, but he gets open and has an outstanding feel after the catch.”

BLEACHER REPORT – NO. 5 OVERALL TO THE JACKSONVILLE JAGUARS

“Two Ohio State wide receivers heard their names called among the top-11 picks in this year’s draft class. Jaxson Smith-Njigba outplayed and outproduced both last season,” Sobleski said. “Smith-Njigba exploded onto the scene as a sophomore with 1,606 receiving yards, including a staggering 347-yard effort in the Rose Bowl against the Utah Utes.

“Granted, Chris Olave and Garrett Wilson certainly drew their fair share of attention, and the 20-year-old target must now enter the season as the player every single opponent will be trying to stop. Nonetheless, Smith-Njigba has the skill set to handle the burden.”

YAHOO! SPORTS – NO. 9 OVERALL TO THE CHICAGO BEARS

“Justin Fields finally gets his WR1, and it’s a familiar face,” Easterling said. “Smith-Njigba has the explosiveness and big-play ability to be an instant star at the next level, especially if he’s catching passes from his old quarterback.”

CBS SPORTS – NO. 6 TO THE CHICAGO BEARS

COLLEGE FOOTBALL NEWS – NO. 7 TO THE CHICAGO BEARS

FOX SPORTS – NO. 7 TO THE JACKSONVILLE JAGUARS

NBC SPORTS – NO. 4 TO THE SEATTLE SEAHAWKS

THE ATHLETIC – NO. 13 OVERALL TO THE LAS VEGAS RAIDERS

“Next year’s offensive tackle class doesn’t look particularly strong right now, and the OT1 spot is wide open,” Brugler said. “The Buckeyes’ starting right guard in 2021, Johnson is expected to move out to tackle as a junior in 2022, and scouts will be watching him closely.”

BLEACHER REPORT – NO. 29 OVERALL TO THE KANSAS CITY CHIEFS

“Paris Johnson Jr. joined the Ohio State Buckeyes as a five-star recruit and the nation’s top-ranked offensive tackle prospect in the 2020 class. He’s played guard early in his career, though. He’ll make the transition back to left tackle this fall,” Sobleski said. “A year at left tackle should provide Johnson with an opportunity to establish himself as a first-round talent.”

YAHOO! SPORTS – NO. 11 OVERALL TO THE WASHINGTON COMMANDERS

“Depending on how the 2022 season plays out, the Commanders could end up needing a long-term upgrade at left tackle,” Easterling said. “Johnson has the size, athleticism, and technique to be a franchise player at a premium position.”

CBS SPORTS – NO. 14 TO THE PHILADELPHIA EAGLES

COLLEGE FOOTBALL NEWS – NO. 5 TO THE JACKSONVILLE JAGUARS

FOX SPORTS – NO. 13 TO THE MINNESOTA VIKINGS

NBC SPORTS – NO. 11 TO THE WASHINGTON COMMANDERS

BLEACHER REPORT – NO. 17 OVERALL TO THE TENNESSEE TITANS

“The Tennessee Titans drafted Nicholas Petit-Frere in this year’s third round as the possible long-term solution at left tackle and should be developed as Taylor Lewan’s potential replacement,” Sobleski said. “The Titans can bring in Petit-Frere’s collegiate teammate, Ohio State’s Dawand Jones, and have a plan to address both tackle spots.

“Jones is a massive road-grader (6-8, 360 pounds) at right tackle. He’ll need to clean up his pass protection to firmly establish himself as a first-round talent, but just being marginal in this area is good enough since pass-rushers are forced to circumnavigate his expansive wingspan.”

THE ATHLETIC – NO. 16 OVERALL TO THE PHILADELPHIA EAGLES

“Based on last season, Harrison isn’t yet a first-round prospect because the tape wasn’t good enough,” Brugler said. “But with his near-36-inch arms and 4.5 speed at 6-6 and 265 pounds, he has first-round traits. And if he shows improvement as a pass rusher on the 2022 tape, NFL teams will happily draft him in the top 32.”