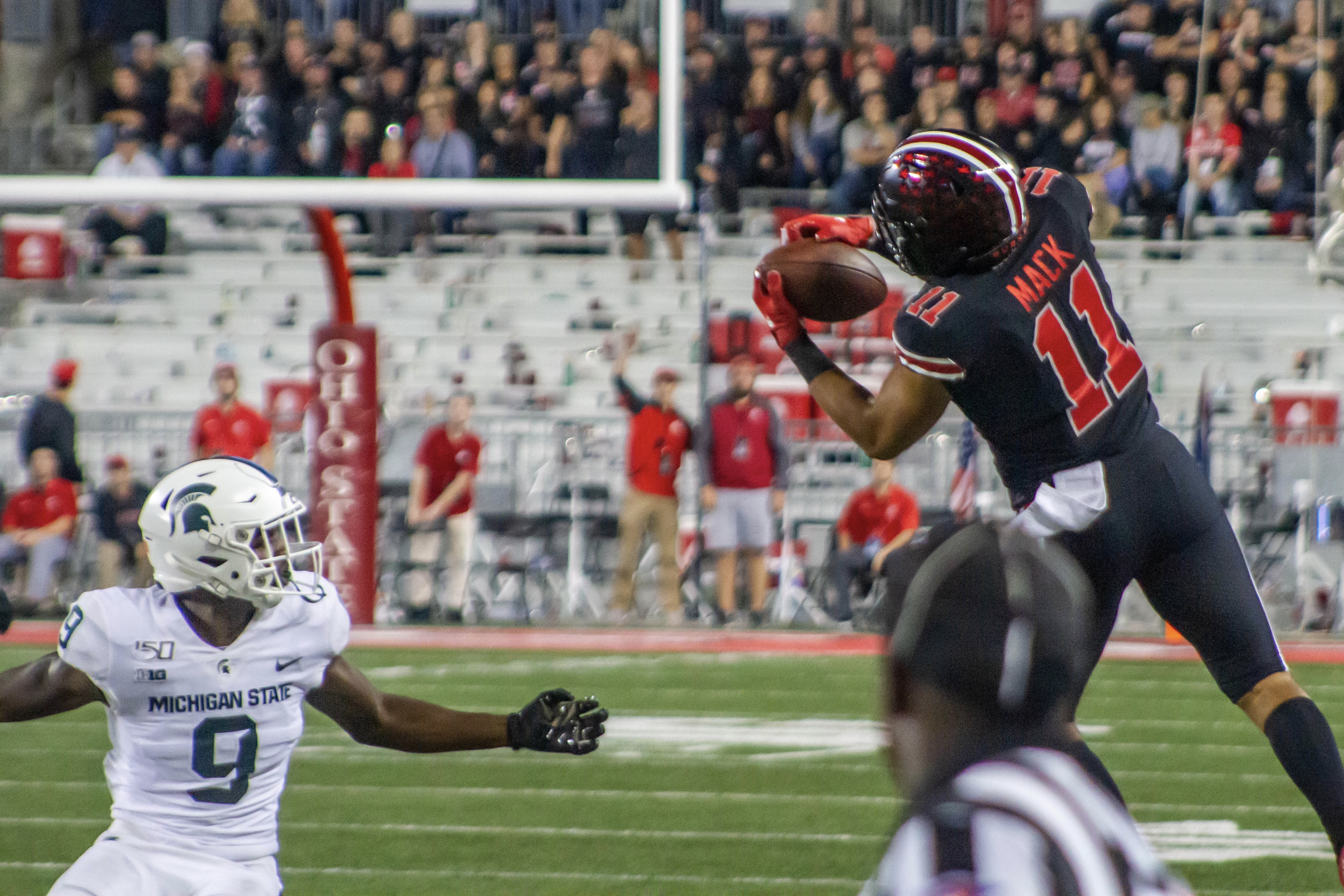 Austin Mack’s Ohio State career is tricky to boil down and understand. The Indiana product put together three years of consistent production for Ohio State, hauling in 24, 26 and 27 receptions in 2017, 2018 and 2019 respectively, hovering right around the 340 yards mark each season. He just topped the 1,000-yard mark for his career, score just six touchdowns, and caught fewer passes in his three years as a starter than Parris Campbell did in 2018 alone.

The stats aren’t particularly friendly to Mack. They tell the story of a receiver that has an obvious ceiling that he hit early and never found a way to move past it.

In a way, that’s a fair assessment. What you see is what you get with Mack, and what you saw in college, both in the stats and in the film, was a wideout with pretty good hands that ran pretty good routes but was almost always overshadowed by every other receiver on the field.

However, diving deeper into the tape shows that Mack’s constant ability to float under the radar isn’t a flaw of his game: it’s a feature. Mack’s ceiling is a possession receiver on a team that already has elite pass catchers elsewhere, allowing him to exploit defenses and serve as an always-open option for his quarterback. He knows how to do it, he’s good at it, and he’ll be good at it regardless of the level of competition.

However, more than maybe anyone else in this Ohio State draft class, Mack is in need of a good fit. he needs to be on a team with at least two good receivers, because he isn’t going to work as a No. 1 or No. 2 option. Mack is the third or fourth receiver on a team like the Browns or Cardinals that already has two or three receivers they can trust, but just needs someone who catches everything he sees.

Luckily for Mack, similar to his classmate Binjimen Victor, the NFL may actually suit him better than the college game, which means that his ability to get open as a third or fourth option may actually get better as he moves onto the next level. Like Victor, Mack is quite a bit better against man than he is against zone, largely because of his physicality.

Mack isn’t big, checking in at 6-1, 208 pounds at the NFL combine, but he plays much bigger than he is, because he’s great at two things when the ball is in the air: hand fighting and body control. Mack is able to keep his catch radius clean with his hand fighting when the ball is coming, and once it’s in the air, he has better body control than anyone on Ohio State not named Garrett Wilson. That’s what made him so good on those back shoulder throws. He was able to contort in weird ways to separate just enough from the cornerback that he can get his entire upper body facing the ball in time to make a great catch.

Honestly, Mack’s body control and hand technique is pretty similar to that of his coach, Brian Hartline, which probably explains a lot of Mack’s game. Hartline carved out a solid niche in the NFL as a guy who caught everything, and was seemingly always open, despite lacking the athleticism to beat elite NFL cornerbacks. The niche is there for Mack to fill, and he’s learned directly from one of the best at it.

The body control flashes on plays like this too, which Mack had an inordinate amount of in 2019. Despite catching the ball just 27 times, it felt like Mack reeled in 55 ridiculous, one-handed snags last season.

There is something beyond traditional receiver traits worth talking about when scouting Mack. While as a pure receiver he may be destined for UDFA status, lacking the elite traits needed for a team to take a flier on him, Mack does have an elite trait elsewhere, and he may actually be better at in this category than any other receiver in this class: run blocking. Mack’s ability to block on the outside in 2019 would make Evan Spencer (one of the best wideout blockers in school history) blush.

He was excellent. It was why he found the field so consistently, and it honestly played a significant role in making Ohio State’s outside zone running so good. Mack’s blocking is on par with quite a few tight ends, and he’s going to bring that directly into the NFL without any sort of transitional period.

Take this play for example, where Mack sells the go route to move his corner off, cuts inside like he’s running a slant, and cracks down on the safety just enough to slow him down, keeping J.K. Dobbins clean as he runs through the hole and opening up another 10 yards of open space for the halfback in the process. Plays like this are littered throughout Mack’s tape, and, in a just NFL draftsphere, would be enough to earn him a late round pick.

As it stands, Mack seems to be a long shot for being drafted, which may not be the worst thing in the world. As a UDFA, he would have the chance to handpick a team that suits him. Because fit will be so crucial for him, making the right choice could be the difference between washing out of the league and catching on as a No. 4 option and awesome exterior blocker. Mack has the talent to pull off the latter, but he may need to get a little lucky to avoid the former.