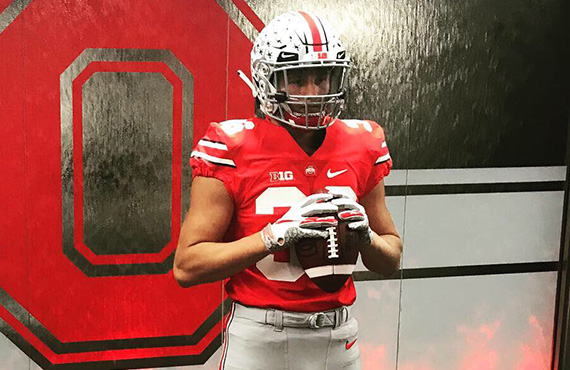 There hasn’t been a unit on Ohio State’s roster than has undergone a more significant identity shift in recent years than the linebacker group. After falling on hard times late in Urban Meyer’s tenure under former linebacker coach Bill Davis, the once heralded silver bullets were in desperate need of a shift in approach to catch up to what the rest of the country was doing at the position, and to better suit what Ohio State needed to do to stop opposing offenses.

To make that change, Ryan Day hired former Michigan linebacker coach Al Washington, who had spent several years in Ann Arbor coaching what has become the new prototype of college football linebacker, a longer, faster hybrid player that looks almost nothing like the 250-pound run stuffers that Ohio State leaned heavily on in the 1990s and 2000s. Washington’s addition brought with it immediate change, and helped the Buckeyes improve from a deeply troubled defensive unit in 2018 to one of the best in the country in 2019.

A lot of the improvement came from the linebacker room, where Washington had reworked the roles of his players, allowing excellent athletes like Malik Harrison and Pete Werner to play much more freely in Jeff Hafley’s single-high, zone-heavy defense. After being caught in the mud too often in 2017 and 2018, the linebackers looked much quicker in 2019, both in stopping the run and defending the pass.

Now, as Ohio State enters year two with Washington in charge of the linebackers, that shift in ideology is really starting to show on the recruiting trail as well. Washington was only around for about a month before 2019 recruits signed, and with much of that class already on board at the early signing period, he wasn’t really able to make much of a mark on that class, as Tommy Eichenberg, Cade Stover and Craig Young all put pen to paper before Washington arrived.

The class of 2020 served as Washington’s first opportunity to bring in players that fit his system, and he made a very strong statement in landing Mitchell Melton, Cody Simon and Kourt Williams, three linebackers that fit much more into the current style of athletic, versatile linebackers than what Ohio State had been going after under Davis, and even before his tenure. Melton is still a bit of a larger tweener player than could end up on the line, but Williams and Simon are very much linebackers that fit the time.

The same is true in 2021 with Reid Carrico and (potentially) Jaylen Johnson, but the class of 2022 may be the best example yet of the style of player that Washington wants in his room. With just four pledges in the class, Washington has already secured commitments from two of the country’s most athletic linebackers, and seems to be on the verge of bringing in a third, more than a year and a half removed from the class of 2022 signing national letters of intent. Archbishop Alter (OH) High School product C.J. Hicks was the first of the bunch, and on Saturday, he was joined by Marysville (OH) linebacker Gabe Powers.

With Kansas standout Dasan McCullough still on the board but seemingly heavily favoring the Buckeyes, Washington appears to be on the verge of locking down what could be the most athletic class of linebackers to ever sign with Ohio State.

In the latest pledge, Powers, Washington has his weak side linebacker to pair with Hicks on the strong side. At 6-foot-4, 220 pounds, Powers already has college-caliber size, though he has the frame to take on at least 15 more pounds comfortably, and Ohio State will likely bulk him up closer to the 240-pound mark, as he isn’t likely to lose much, if any of his speed by tacking on some extra weight to his frame. He’s a natural athlete and would do just fine in a college weight program with maintain that athletic ability.

With that athletic ability, he’s already a terror coming off of the edge as a pass rusher. He has great downhill speed and can track a quarterback well, though he has little to offer in the way of pass rushing moves, which will likely keep him at linebacker rather than see him move to end, despite having the physical potential to make that move. That won’t be a problem as a linebacker however, because he knows enough to get by, and when rushes are designed for him, he won’t be asked to be a dominant technician.

Powers pairs that athleticism with some pretty excellent instincts and vision, which is a great sign for his prospects as a run defender moving forward. He’s able to identify plays quickly when he’s in a run-first zone (exactly what he’ll do at Ohio State as well), and has the explosiveness to get into the backfield in a hurry when he has a lane to stop a run before it can get started. He’s strong enough to fight through traffic too, so he should be able to contribute as a run stopper from day one at Ohio State.

His best trait, and the one that Ohio State is most looking for in a linebacker is his ability to move horizontally. He’s strong at the point of attack and sheds blocks well, while keeping his feet churning and closing in quickly, even when he isn’t the play side linebacker. He sets a nice edge when the run does come to him, and doesn’t seem to have any trouble with angles or timing. He has a good feel for when it’s time to abandon the lateral shuffle and flip his hips to close the gap, and does so fluidly and naturally.

Once he gets to the ball carrier, he hits low most of the time, and drives through the initial contact almost every time, leaving little up to arm tackles or a big first impact without much follow through, which some young linebackers struggle with.

The point of improvement is in the passing game, where Powers doesn’t have the experience to be particularly comfortable in either zone or man, though he’s athletic to play man on tight ends and bigger running backs, and smart enough to understand the basics of zone once he reads pass. Ohio State will have to work with him on spacial awareness on passing plays, but that’s common with high school linebackers, and frankly, he has to have at least one flaw, or he’d be the No. 1 player in the nation.

In total, however, he’s pretty close to the ideal fit for what Washington wants from an outside linebacker. He may be a little too aggressive for his own good at this point, though that’s hard to say without access to his full game tape, and it may not end up being an issue at the next level. His coverage skills need work, but again, that’s to be expected. As a pass rusher, a run stopper and an overall athlete, everything points to Powers being an asset for the Buckeyes from day one as a special teams ace, and it seems overwhelmingly likely that he’ll work his way into a starting spot at linebacker as a sophomore, because he’s just too talented to keep on the bench.