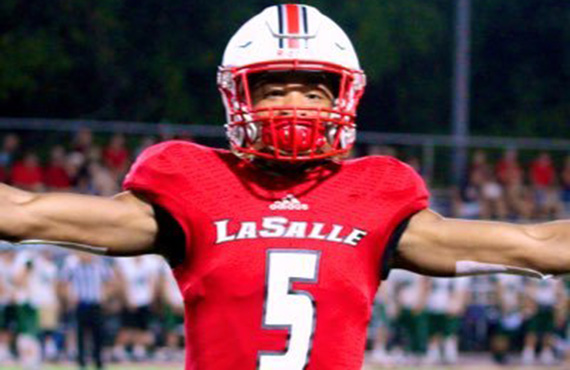 For the second day in a row, despite a pause on in-person recruiting, Ohio State has landed a commitment from a top 2021 defensive back, this time in the form of La Salle (Ohio) three-star Devonta Smith.

Smith is the second cornerback in the class along with Jakailin Johnson, the March 15 commitment, and the third defensive back, with Jaylen Johnson, another La Salle product, coming to Ohio State as a safety/bullet.

While he commits as a three-star, ranked as the 428th best player in the country, he likely won’t finish in that spot. His offer sheet is that of a top tier recruit, landing offers from Alabama, Notre Dame, Oregon and Tennessee along with 24 others, Buckeyes not included. A significant bump in rankings can be expected soon for the newest pledge to the 2021 class, which now holds 12 members.

It’s pretty easy to see why that bump is expected, too. Smith has grown into his frame as of late, checking in at 6-0, 185 pounds after spending much of his early high school as a relatively undersized defender. Since that growth spurt, Smith has been one of the most dominant cornerback recruits in the nation, and that improvement is exactly why Ohio State wanted to offer before it was too late.

A third-team All-Ohio selection as a junior, Smith flashed tremendous athleticism, serving as a cornerback and one of the best punt returners in the state, returning six for a score on the year.

Part of the reason for his ranking was a lack of obvious position. La Salle plays a lot of cover 2 zone, and Smith spent a lot of time as one of those high safeties. It was a role that he played well, but he doesn’t have the physicality or size to play safety at the next level. he projects to an inside cornerback role, similar to the one that Shaun Wade played for the Buckeyes in 2019.

Because of his experience at safety, he should have an easy transition into that role at Ohio State. He isn’t physical enough to play safety, but he’s more than physical enough to be a slot or nickel corner, and he’d actually be a much better tackler coming in than most cornerbacks are. He has a great understanding of pursuit angles, wraps up well, and gets low against bigger opponents.

While he has the strength and willingness to do it, he hasn’t shown a ton of physicality in coverage, though it’s not through any fault of his own. Because he’s played primarily in zone, he hasn’t done a ton of hand fighting at the line of scrimmage, and most of his play in coverage is done moving downhill, rather than backpedalling or running with a receiver. He’ll have to learn the latter at OSU, but not being amazing in press isn’t going to be an issue if he does play on the inside in Columbus.

In total, Ohio State is getting what certainly looks like a diamond in the rough. Smith is an excellent athlete and already very strong in both zone coverage and tackling, and on top of that, he could be an instant impact player in the punt return game, something that the Buckeyes haven’t had in years. He isn’t as day-one ready as either of the Johnson’s in the 2021 defensive back class, but his ceiling is tremendously high, and his floor is a whole lot better than his ranking indicates.