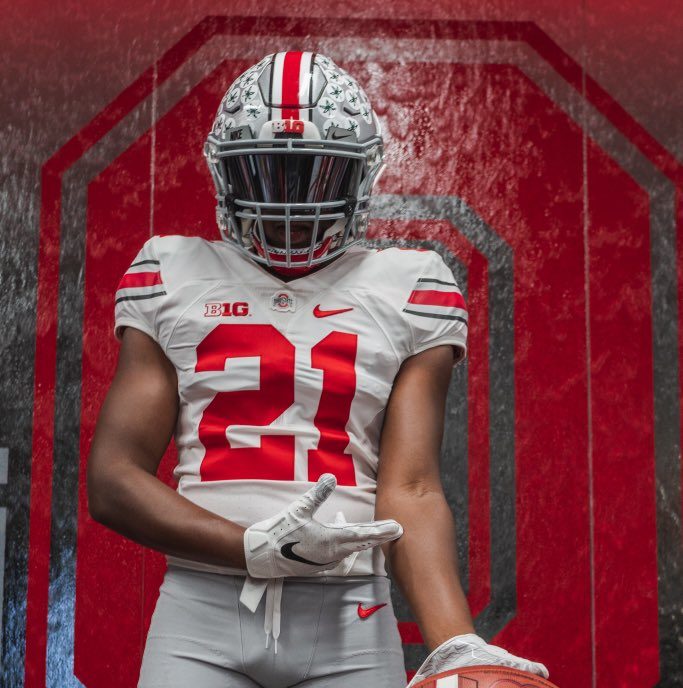 Ohio State running backs coach Tony Alford broke out of his recruiting cold streak on Monday, landing one of the nation’s top 2021 running backs after largely whiffing on the class of 2020. That commitment, North Carolina native and top-100 recruit Evan Pryor, doesn’t just serve as a pretty massive win for the Buckeyes on the trail, either: it shows what may be the new prototype at halfback in Columbus.

Pryor, who held offers from 34 schools including the Buckeyes, picked OSU primarily over North Carolina, his home state school, and Alabama, though Georgia was in the running as well. While Ohio State is always going to have a natural pull for just about every top recruit in the country, this commitment stands out, both because of fit in the class, and future fit at Ohio State for Pryor. Recruits don’t commit to a school if they aren’t confident in both of those things, and the unique circumstances that Ohio State has at Ohio State right now makes this dynamic very intriguing.

With regards to the class, Pryor is going to be one of two, or even three top running backs that Ohio State signs this season. The Buckeyes lead for Michigan halfback Donovan Edwards, rated as the No. 38 player in the country and No. 3 halfback, and are very much in the running for Virginia product TreVeyon Henderson, the No. 17 player in the nation and No. 2 running back. Pryor knows that he isn’t going to be alone in this class, and committed anyway, likely in large part due to a shift coming in Ohio State’s plan for running backs moving forward.

That is to say, essentially, the days of a true workhorse running back could be numbered. This has been coming for a while now in football, with 300 carry seasons becoming essentially unheard of outside of schools like Wisconsin, and with the increasing need for halfbacks that can also play a role in the passing game. Generally, backs that can do that are smaller, like Pryor (5-10, 190 pounds, though he will likely be closer to 210 at Ohio State), and can be rotated a bit more frequently to avoid a significant amount of damage.

Landing several top backs in one class doesn’t necessarily mean that the change is coming right away at Columbus, but gone are the days of Archie Griffin, Keith Byars, Eddie George, Ezekiel Elliott, and perhaps even J.K. Dobbins.

The shift is obvious in style too. Each of those three halfbacks are on the quicker side, and more focused on receiving, elusiveness and speed than the bruising running style of old college football. Pryor might actually be the most physical of the bunch, but he’s still much more of a finesse player than a power runner.

He shows off great top end speed and quickness, as well as a low-to-the-ground running style that, along with being aesthetically enjoyable, makes him quite a bit more difficult to tackle than someone like Master Teague, who runs much higher up. He’s shifty in open space, and has elite vision, especially for someone as young as he is.

His quickness and vision should make him a very strong fit right away into Ohio State’s zone run scheme, especially on outside zone runs, though he doesn’t show off a ton of lateral movement and patience in his tape. That doesn’t mean it isn’t there (in fact, he seems to be at least serviceable at it), but it does mean that he’ll probably need to spend some time working on it.

When he does get hit, he doesn’t have the size to truly punish defenders, but he’s explosive through contact and generates quite a bit of force with his legs, which very rarely stop moving once the play starts. He finishes well through tackles, and while he’s never going to be a grind-it-out back, he can manage a pretty sturdy workload, especially if he’s splitting time with one or two other primary ball carriers.

The best way to concisely define Pryor’s game is by saying that if he was the lone running back in the class, Ohio State would have quite a bit to be happy about. he has the talent to be a star at the next level, and if he isn’t asked to carry the ball 250 times in a season, it’s only going to make things easier on him, because he’s going to thrive most when he has fresh legs.