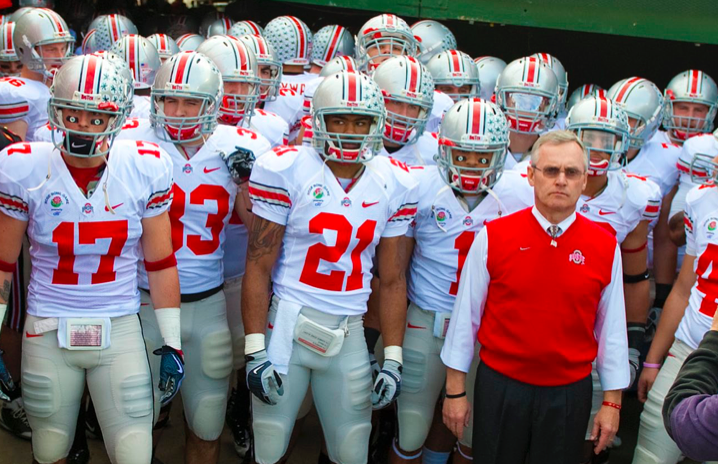 The headline:  All Treats, No Tricks

After falling to Wisconsin midway through the 2010 season — Ohio State’s only loss of the year — the Buckeyes rebounded by defeating Purdue by 50 points and Minnesota by 42 points.

Ohio State quarterback Terrelle Pryor continued his dominant campaign, contributing through the air and on the ground against the Gophers. He threw for 222 yards and two touchdowns and added 55 yards and a touchdown with his legs.

Running back Dan Herron and wide receiver DeVier Posey also had significant games for the Buckeyes. Herron carried the football 17 times for 114 yards and two touchdowns, and Posey caught six passes for 115 yards and a score.

Minnesota staged a huge Halloween party on Oct. 30 at TCF Bank Stadium with everyone in attendance, from Elvis to Lady Gaga. It wasn’t all that difficult, though, to figure who was who when it came time for the unmasking at night’s end.

As with most masquerade parties, early deception gave way to reality as Ohio State simply overpowered its mistake-prone hosts and ran away with a 52-10 victory,

As the evening’s festivities began, the Golden Gophers did their best impression of an offensive juggernaut, scoring an early touchdown on a quick-strike drive that covered 74 yards in less than two minutes. Unfortunately, many of their fans missed the early fireworks since they came convincingly disguised as empty seats — the announced attendance of 48,717 seemed to be stretching it a bit.

The Buckeyes did some masquerading of their own, often resembling Swiss cheese on defense in the early going as Minnesota quarterback Adam Weber completed his first three pass attempts of the game for 103 yards.

But after the Gophers tied the score at seven at the 7:44 mark of the first quarter, OSU had evidently had all of the tricks it was going to stand. The Buckeyes outscored the Gophers by a 45-3 margin from that point and gained 461 total yards to only 158 for the disappointed party hosts the rest of the way.

Ohio State opened the game on an 11-play, 56-yard drive that took 5:35 off the game clock. After marching to the Gopher goal line, the Buckeyes called Pryor to sneak behind his offensive line. He fell into the end zone to give Ohio State the early lead.

As Rea wrote, the Gophers struck quickly and found the end zone in just under two minutes of possession. Minnesota running back DeLeon Eskridge ran 7 yards for a touchdown — one of only two scoring plays for the Gophers.

The Buckeyes would then score 24 points unanswered points from four different players.

Ohio State running back Brandon Saine caught a 3-yard touchdown pass from Pryor at the end of the first quarter, capping a 14-play, 92-yard drive that lasted over seven minutes.

At the beginning of the second quarter, an Ohio State possession stalled inside the Minnesota red zone, and the Gophers forced the Buckeyes to settle for a 23-yard field goal from Devin Barclay.

Near the end of the first half, Herron ran in a 10-yard touchdown, and Pryor connected with Posey for a 38-yard touchdown to give the Buckeyes a comfortable lead heading into the half.

The Gophers opened the second half with a 33-yard field goal from kicker Eric Ellestad. The Minnesota offense struggled from this point forward and failed to put any more points on the board.

The next Buckeye score came from a special teams touchdown. Minnesota punted from their own goal line, which led Ohio State to send the house. Zach Domicone returned the punt for the score to give his team a 28-point lead.

On Ohio State’s next offensive possession, running back Jordan Hall sped past the Minnesota defense to score from 16 yards out. The drive only required six plays and only took three minutes off the game clock.

Ohio State’s final points came when linebacker John Simon took a fumble recovery 30 yards to the end zone. The Buckeyes would spend the remaining 10 minutes making stops on defense and running out the clock with the second and third-string offenses.