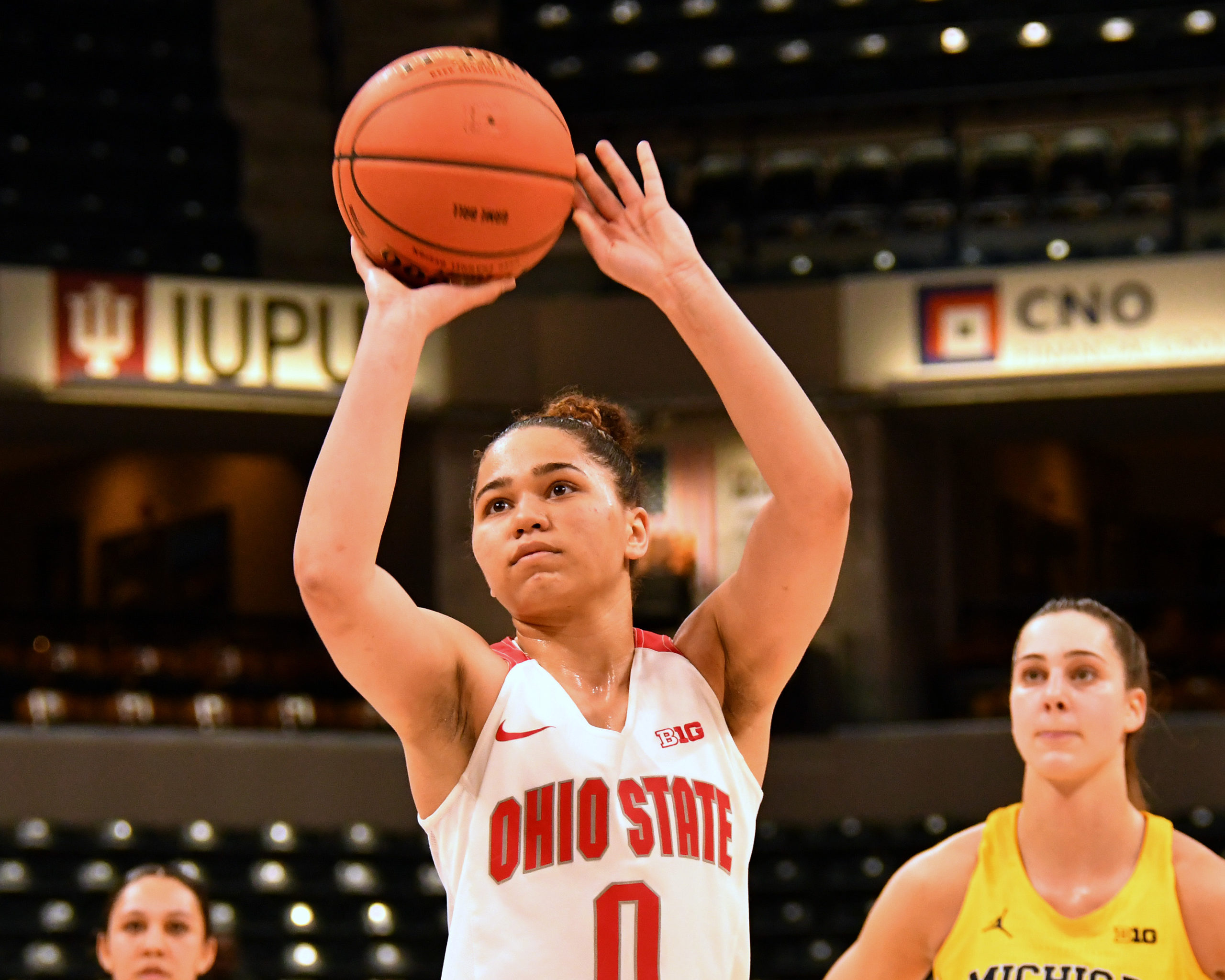 Ohio State is headed to the Big Ten tournament championship game following a 66-60 victory over Michigan.

It was a back-and-f0rth battle that forced the Buckeyes to buckle down on defense and hit key shots down the stretch in order to survive, areas of the game that require poise, confidence, and, often times, experience.

But what made those key shots more impressive was that most of them were done by a pair of true freshman guards: Jacy Sheldon and Madison Greene.

Sheldon and Greene combined for 12 of Ohio State’s final 18 points, all of which came after the Wolverines managed to tie the game at the 7:18 mark of the fourth quarter.

That level of poise is rare for first-year players, but Sheldon, Greene and the rest of this young Ohio State group have been through enough in just one season together to make up for it.

“We don’t even feel like freshmen anymore. Just throughout the whole season, we’ve been growing and getting better and building more chemistry as a team,” Greene said. “I’m just proud of where we are right now.”

Not only have Ohio State’s freshmen played in some significant minutes: They’ve played in nearly half of the minutes for the team overall. Of the Buckeyes’ 6,450 total minutes played through 32 games, 3,126 of them have been handled by first-year players, a whopping 48.5 percent. Sheldon’s 870 minutes leads the pack, a minutes total that ranks No. 3 on the team. Trailing close behind is Greene (779 minutes) and guard Kierstan Bell (605).

Against Michigan, in the game with the highest stakes all-season long, the four active freshmen of Greene, Sheldon, Bell and forward Aixa Wone combined for 83:56 of play time, 42.5 percent of the game.

“What we saw tonight was sort of the culmination of a lot of young players playing a lot of minutes throughout the year, because they rarely looked like freshmen tonight,” head coach Kevin McGuff said. “Our young kids don’t feel like freshmen anymore, and they didn’t play like it tonight.” 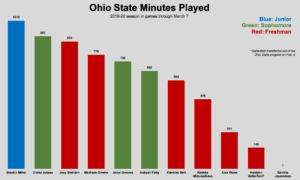 Junior guard Braxtin Miller and sophomore forward Dorka Juhasz still lead the way as far as minutes go, but five of the next seven key members of the rotation had never played a second of collegiate basketball heading into this season, and now they are a major part of how Ohio State has won 10 of its past 12 games, and is a game away from taking home a Big Ten title.

“I think everyone’s getting more comfortable, just in general playing with each other as the seasons gone on,” Sheldon said. “It’s been a lot of fun just learning to play with each other, and yeah, hopefully we keep it up.”

With all this youth, and with just one upperclassmen who has received significant minutes, there have come doubters, at least according to the Buckeye players.

That has put a chip on the shoulder of sophomore guard Janai Crooms, and has been a major component in this late-season surge that Ohio State is currently riding.

“Being so young, just coming out and getting our names out there, I think everyone has projected us for the underdog,” Crooms said. “I think we’re proving something, and I’m really proud of us how we came out and started strong throughout this whole tournament.”

The growth in this team has been obvious as the year has progressed to McGuff, not just in a clear uptick in wins, but in an overall matured level of play across the board.

“In November and December and even January, we looked like freshmen because we are,” McGuff said, “but these young kids have played so many minutes in so many tough games that we’ve really grown up, and it’s really great to see the maturity level and the ability to execute in a tight game like tonight. “

This young team has made its presence known, and it has its toughest task of the tournament coming up on Sunday at 6 p.m. against top-seeded Maryland.

But Ohio State is no longer the underexperienced, unexpected team that can’t play with the highest levels of the conference. It is a team that has made it all the way to the championship game, more times than not in dominant fashion, and is a team that is playing its best basketball at exactly the right time.

And the Buckeyes did not show up to Indianapolis simply looking to pick up a few upset victories.