Recap: No Mercy To Open Season 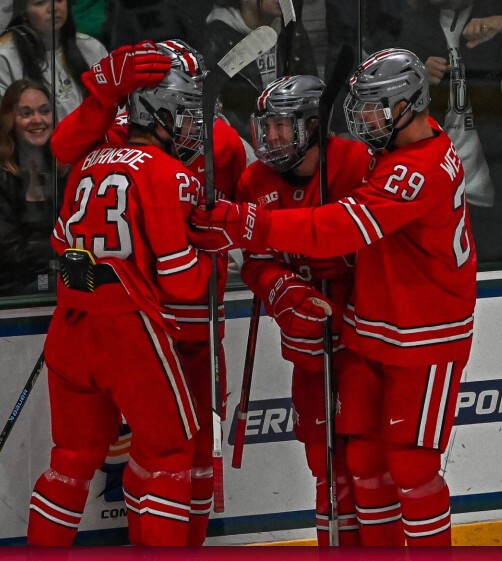 Ohio State opened the season with 4-2 and 4-1 victories at Mercyhurst on Saturday and Sunday with traits associated with past successful teams for tenth-year coach Steve Rohlik.

The No. 16 Buckeyes excelled in special teams, received solid goaltending and scored by committee.

Travis Treloar led the way with a goal and three assists in the series as the eight goals were scored by eight players. Jakub Dobeš, the Big Ten goalie of the year last season as a freshman, saved 43 of 46 shots to start his sophomore season, the Buckeyes scored twice on the power play and added two shorthanded goals while going 10 for 10 on the penalty kill for the weekend.

In all, a good start compared to last season when an opening loss to Bentley factored in OSU not qualifying for the NCAA tournament by the slimmest of margins according to the PairWise metrics.

“We played a great game (Sunday) and had a solid weekend overall,” Treloar said. “It’s nice to start the season off with a sweep. Our work ethic was great. We obviously need to keep elevating our game every week and work on some details, but overall, we should be proud of the start we had.”

The first goal of the season, a historic one at that, was scored by freshman Davis Burnside just 3:52 after the opening faceoff. He picked off a pass and scored on the backhand for an unassisted goal.

Besides, being his first as a Buckeye, what was the big deal? Well, Oct. 1 was the earliest OSU had ever opened the season, giving him the distinction of the earliest (calendar) goal in program history.

Jonathan Berndorf tied it 1-1 at 3:15 of the second period but the Buckeyes exploded for goals 1:59 apart to carry a 3-1 lead into the third.

Gustaf Westlund scored from the high slot at 9:29 and Patrick Guzzo took a pass from CJ Regula for a 2-on-1 shorthanded goal.

“I think we’re going to be a fast team, good in transition and be able to possess pucks and wear teams down,” forward Jake Wise said.

With 4:52 left in the third, the Lakers made it a one-goal game when Garrett Dahm converted a rebound. They pulled their goalie but Kamil Sadlocha scored into an empty net with 10 seconds left for the final margin to disappoint the sellout crowd of 1,500 at the Mercyhurst Ice Arena in Erie, Pa.

“This was a good hard-fought win on the road,” Rohlik said. “For the first game of the year it was a bit of a scramble and it was nice to come out on the right side. Lots of guys contributed tonight.”

The Buckeyes wasted little time putting away the rematch in front of 716 patrons. Cam Thiesing scored 59 seconds into the game on assists to Westlund and Wise. Treloar extended the lead to 2-0 at 16:33 with a power-play goal from Mason Lohrei and Michael Gildon.

In the second period, a second shorthanded goal of the series came courtesy of Tate Singleton at 2:17. James Marooney carried the puck out of the zone and spotted Matthew Cassidy, who dropped the puck to Singleton in the faceoff circle.

At 4:52, Wise potted a man-up goal for a 4-0 score. Stephen Halliday got a pass to Treloar for a shot that was saved but Wise was in the circle to one-time the rebound. The freshman Halliday earned his first point with the assist. Carson Briere broke Dobeš’ shutout bid at 5:05 of the second.

The Buckeyes outshot the Lakers 44-19 and killed all five shorthanded situations.

“We got a good feel for what we are as a team and what we can do,” Westlund said. “It also gave us an idea of what we have to keep working on to get better.”

Freshmen Burnside, Halliday and Tyler Duke, plus senior transfer Scooter Brickey (Western Michigan) made their debuts in the opener game and played the next game as well. The only newcomer not to play this weekend was freshman defenseman John Larkin. … Prior to the series, fifth-year seniors Westlund and Wise were named captains and senior Jaedon Leslie was tabbed as the alternate captain. Westlund was a captain last season and an alternate for the 2020-21 season. Leslie was an alternate last season. … The previous earliest season opener was Oct. 2, 1999, vs. Wayne State (a 6-0 win).

The Buckeyes open the home and Big Ten schedule Friday (7 p.m.) and Saturday (5 p.m.) against Wisconsin in Value City Arena.