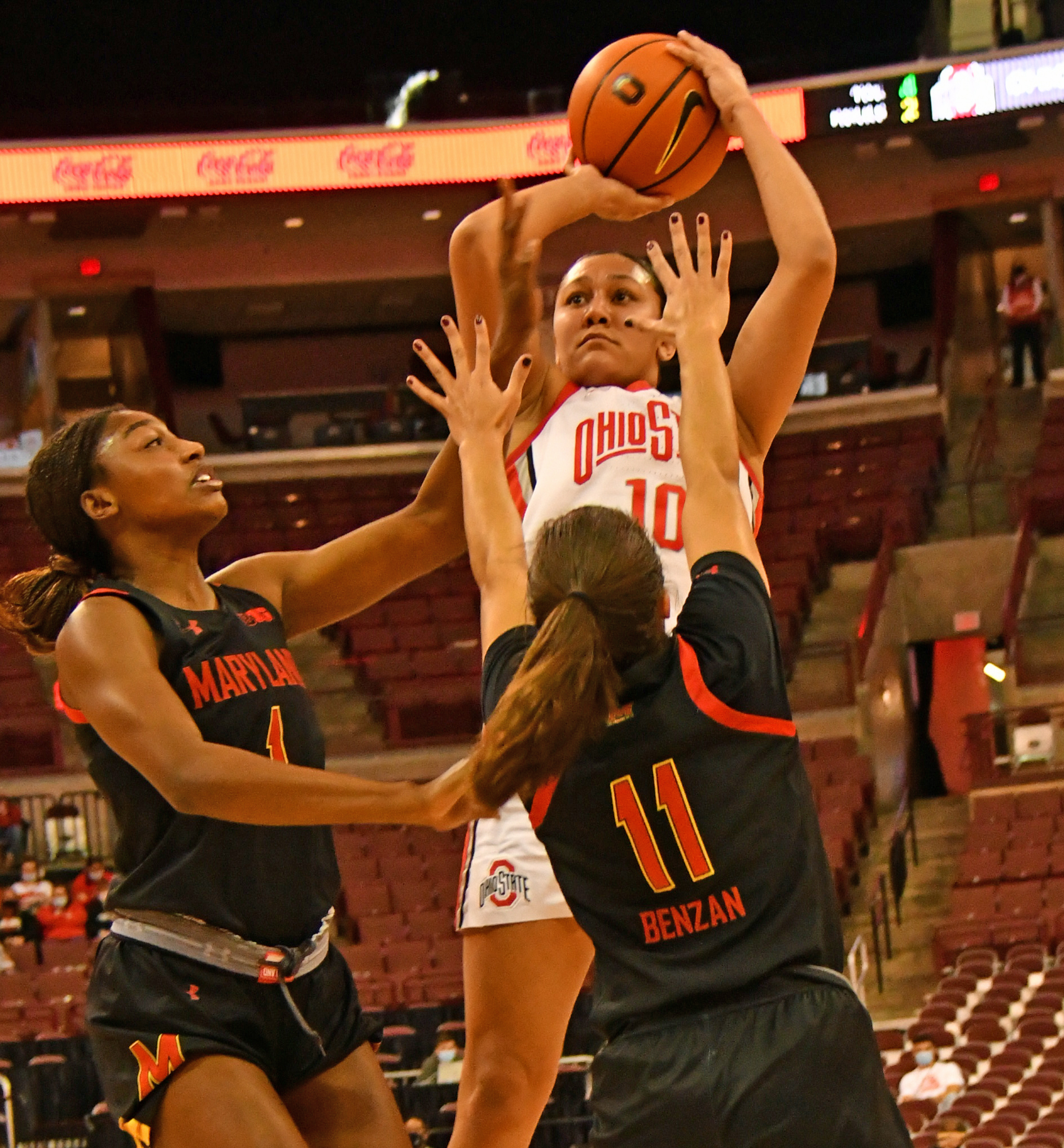 Late in the contest, Ohio State led just 75-70 after leading by 13 at two different junctures, and Maryland was able to hang around for the entire game.

It took just a 33-second span, however, in which the Buckeyes got a 3-pointer from Sheldon, an ensuing layup from Sheldon and then a basket from Mikesell to push the lead to 12 points, 82-70, with 3:54 remaining, and Ohio State went on to win its fifth-straight game, 95-89.

Both of these high-scoring teams showed press early in the contest, but it was the Buckeyes that broke through with three first-quarter triples from Mikesell – all in the first six minutes of the game – to give Ohio State a 13-8 lead.

After missing her first two attempts from the field, junior forward Rebeka Mikulasikova connected on her next two baskets to increase the lead to 17-10. Later in the first frame, a transition layup from Mikesell and a bucket from senior guard Braxtin Miller pushed the lead to 13 points, 25-12, though the Terrapins knocked down a 3-pointer at the buzzer to make it 25-15 at the end of the first.

In the first quarter, Ohio State finished with eight assists, six of which were dished out by Sheldon.

Another three from Miller made it 30-17 early in the third, but the Terrapins began stifling the Buckeyes defensively, forcing misses on nine of Ohio State’s next 10 shots as Maryland took off on a 13-3 run to make it 33-30.

The Terrapins continued threatening, at one point making it a four-point game, 39-35, but as per usual this season, it was Mikesell and Sheldon that lifted the Buckeyes. Sheldon hit a layup, and after a miss by Maryland on the other end, Mikesell knocked down her fourth 3-pointer of the game to make it 44-35.

Maryland continued pressuring the Buckeyes in the third quarter, opening it up with a 10-4 run to make it a two-point game, 49-47, as Ohio State struggled to contain the Terrapins’ quintet of scorers that all average double figures, four of which finished with points in the third quarter.

The Terrapins dropped the deficit to four points, 53-49, but Mikesell and Sheldon once again came through, each knocking down a 3-pointer over the course of three possessions to make it 59-49. Mikesell was assisted by Sheldon, who finished with 24 points and 10 assists, good for her second career double-double, and she also scored her 1,000th point with the Buckeyes during the contest.

Looking to close out their biggest win of the season, the Buckeyes led 65-57 heading into the fourth. It appeared Ohio State was pushing the game out of reach when Sheldon connected on a pair of free throws with 7:18 remaining to make it 71-60, but a 10-4 run in favor of the Terrapins made it 75-70 with under five minutes remaining.

Despite a late run from the Terrapins, the Buckeyes were able to close out the 95-89 win.

Mikesell finished as Ohio State’s leading scorer with 33 points on 11-of-13 shooting, including 5 of 5 from beyond the arc. Angel Reese led the Terrapins with 20 points.

The Terrapins were without head coach Brenda Frese, whose father, William “Bill” Frese, passed away this past Sunday. Associate head coach Karen Blair coached in her place.

The Buckeyes will take the road next to face Rutgers on Sunday, with tip set for 1 p.m.