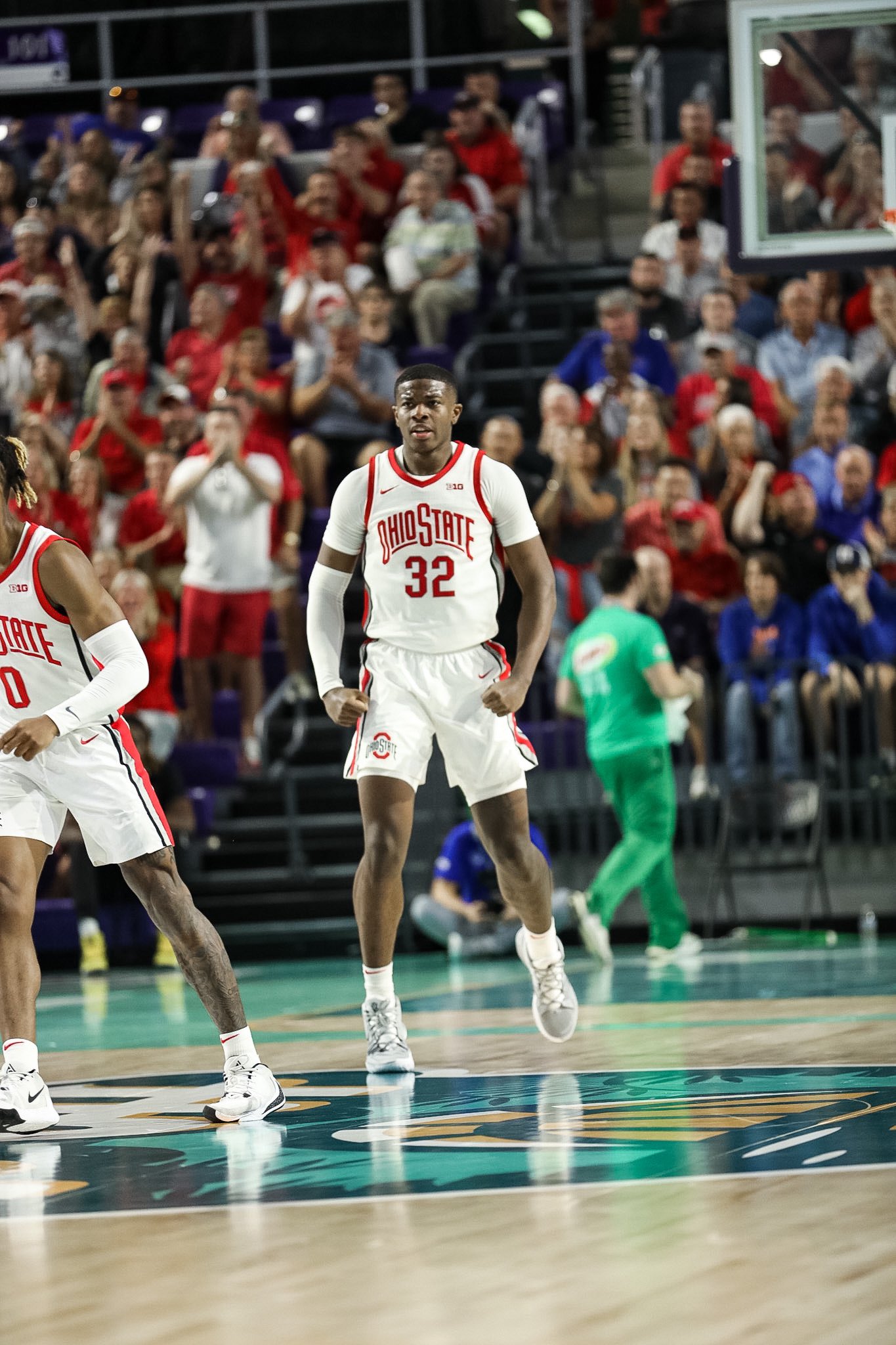 In a 79-76 victory for the Buckeyes, Ohio State and Seton Hall shot the lights out in the opening game of the Fort Myers Tip-Off Nov. 22 – literally. Shortly after a Myles Cade steal and layup to push Seton Hall’s lead to five points at 24-19 with nine minutes to play in the first half, the Buckeyes took the ball up court and set up a Meechie Johnson Jr. shot from downtown, only for the arena’s main lights to go out, sending the game into an unexpected extended pause.
The game wouldn’t resume for five minutes or so before the lights came back on, offering up a needed break for the Buckeyes, who opened the game shooting well but struggled to get any stops against the Pirates.

Right out of the stoppage, forward E.J. Liddell extended what had already been a strong start to the game, drilling a mid-range jumper, blocking a pair of Seton Hall tries on the other end of the floor and then knocking down a three-pointer to knot the game at 24, giving him his fifth make and 12th point of the half.

Those buckets would spark a 21-7 run in favor of the Buckeyes over the next 6:38 of the game, which saw the Pirates stumble into foul trouble on the inside as they dealt with Liddell and Kyle Young, creating plenty of free throw opportunities and lots of space on the outside, which Justin Ahrens and Jimmy Sotos would each cash in on once before the end of the stretch.

Seton Hall was up for the task at the end of the half, cutting the Buckeye lead back down to five, 40-35, entering the break. Out of the half, Ohio State put an end to that.

The Buckeyes reopened play as hot as they’d closed it offensively, jumping out to their largest lead of the game at 52-41 before the first timeout of the frame, bookended by triples from Ahrens and Young.

The two sides would keep roughly that distance for the next eight minutes of play, trading baskets until six straight Seton Hall points, capped by a three-point play for Bryce Aiken, cut the Buckeye lead down to 63-59.

Buckeye head coach Chris Holtmann had some qualms, first with the Aiken three-point play on a drive that likely could have drawn a charge, followed by an OSU possession that saw Liddell roughed up on a missed shot. The Buckeye head coach made his concerns heard, and was given a technical foul for it, giving Seton Hall two more points and the ball.
Just as they did against Michigan in a surprise upset Nov. 16 upset, these Pirates just would not go away. Ohio State answered with an Ahrens three-pointer to push the lead back to five, Seton Hall responded. Sotos hit a jumper, Seton Hall found a layup.

The Pirates answered four Buckeye free throws with a jumper and a trey to cut the deficit back to two. After trading free throws, Seton Hall the ball down two with the chance to tie at 76-74 but couldn’t convert, and when Liddell gathered his own rebound with the clock under 30 seconds on the clock, it looked as though Seton Hall would need to foul.

Instead, Liddell threw the ball away to Jamir Harris, who broke down the court for a layup. Faced with the first tie since 24-24, Ohio State eschewed a timeout as Johnson took the ball down the court, stared down his opposition and, from a country mile beyond the arc, drained what would be the game-winning dagger.