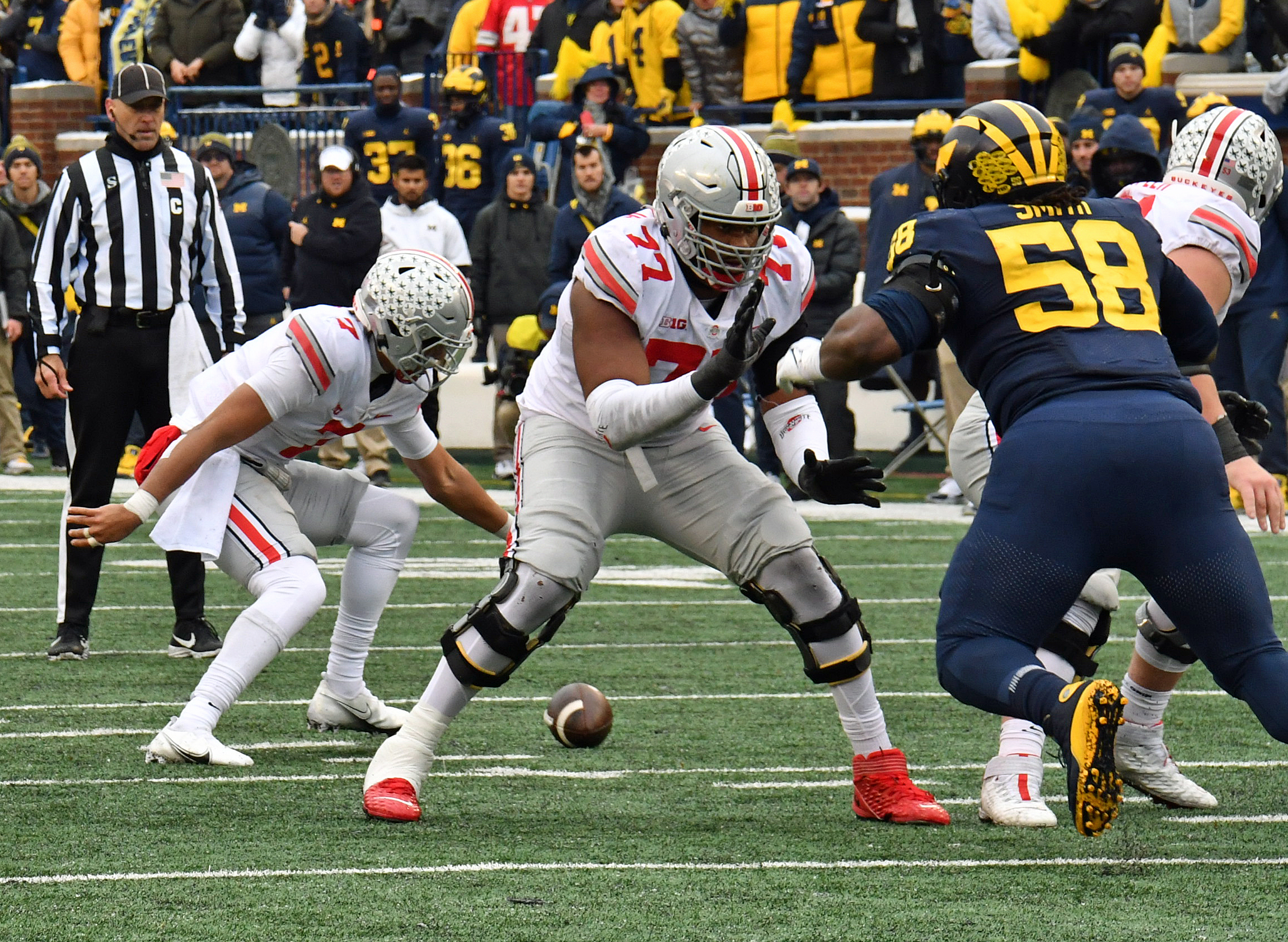 Ohio State sophomore Paris Johnson Jr. became one of the Big Ten’s best offensive guards in 2021, but he isn’t looking to stick around at the position next year.

After 12 games as the Buckeyes’ starting right guard, the 2020 top-rated tackle prospect smiled and let out a small chuckle on Dec. 16 when reporters asked if he would be ready to transition back to his natural position in the offseason.

“Yeah, I am,” Johnson said. “It’s been a while since I’ve been out there in practice, but I’m excited to take that step when it happens.”

However, Johnson was clear that he wouldn’t make a move to tackle until after the year’s final game. He’s worked exclusively at offensive guard during bowl practices. His only opportunities to develop tackle techniques this season have been in the Woody Hayes Athletic Center hallways when he feels an uncontrollable desire.

Johnson admits his mind sometimes wanders to his future at tackle, but he quickly reminds himself of the importance of his current role with the Buckeyes.

“I can’t constantly have my mind on (playing tackle). I took a little time to think, ‘Okay, what are the things I need to work on to be a great tackle?’ But I can’t focus on that right now — even in the slightest — I’m playing guard in the Rose Bowl,” Johnson said. “There’s no need for me to think about what can I do, what can I work on, because it’s not over yet. I still want to have a great game at guard, so it’s all about what I can do to be the best guard for my teammates in the game.

“When that time (to play tackle) comes, I’ll have to reevaluate, but I haven’t been in that stance in a minute, so I feel like when that time comes, then I’ll figure it out, the things I need to work on specifically.”

After his first entire season at guard, Johnson earned second-team All-Big Ten from the conference’s coaches and a third-team media selection. But offensive line coach Greg Studrawa’s decision to start Johnson and Thayer Munford in the interior this season wasn’t always a success.

Ohio State consistently used guard Matt Jones in the rotation, replacing Johnson and Munford — two natural offensive tackles who made room for Nicholas Petit-Frere and Dawand Jones to play outside. Johnson said he disagreed with the decision to play guard. Still, he’s gained indispensable knowledge from his experience at a new position.

“Looking back before the season, if I had to choose, I would’ve chosen to be a tackle and come back and return and be one of the best tackles to come back,” Johnson said. “I feel like where I’m at right now. I feel like I can’t really trade the things I’ve learned being at guard. I feel like learning to be a great guard for my tackle so I know what he wants will help me be a great tackle next year. So I can look at my guard and be like, ‘OK, I know what you can give me on this play, I know what you can’t, what’s realistic, what’s hard for you.’ So I feel like I’ll work better with my guard. I already have been in that situation.”

Before this season, Johnson said he thought a guard could do “anything that I needed a guard to do,” but he’s since learned that was an unrealistic expectation for an interior lineman.

“In practice, it just made it easier when you had (former guard) Wyatt Davis next to you for some reps. In high school, I didn’t know what a guard did, so I feel like I have an appreciation for what guards do, and centers too,” Johnson said.

Petit-Frere and Dawand Jones are draft-eligible, but both have the option to return to Ohio State next season. Still, Johnson seems confident he’ll be playing tackle one in his third season with the Buckeyes. The Cincinnati native added 10 pounds last offseason to get up to 315, which helped him handle the strength of opposing interior linemen. He claimed he can lose a few pounds ahead of next season as he transitions back out to tackle.

Johnson believes he’ll hold some distinct physical advantages over Big Ten edge rushers once he’s back at tackle and a return to the position would help him unlock new abilities that will prepare him for the next level.

“Going back to tackle and having time and space on my side I feel like would be really fun to get back to,” Johnson said. “I’m going against guys that are 300 pounds plus every play. I’m sure going against a guy that’s 280 might be really fun when that time comes.”