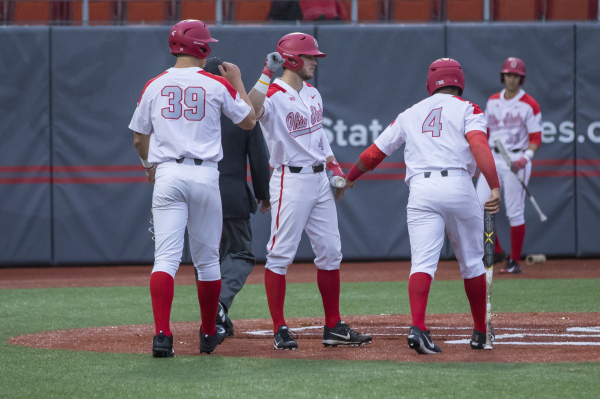 The Buckeyes tallied 10 hits compared to four for the Hawkeyes.

Tyler Cowles and Kobie Foppe drove in the Buckeyes’ only runs, hitting 1 for 4 with one run batted in, and 3 for 4 with one run scored and one RBI, respectively. Bo Coolen and Noah McGowan both hit a pair of singles, representing the only multi-hit performances in the game.

The Buckeyes scored first on an RBI double to left center by Cowles, scoring Foppe from first base to take a 1-0 lead in the top of the first inning. The senior from Grove City, Ohio, drove in the Buckeyes’ first run after knocking in their only two runs against Purdue on Wednesday.

Recently named to the All-Big Ten Second Team, Dominic Canzone started as the designated hitter after suffering a thigh contusion against Purdue. The sophomore from Sagamore Hills, Ohio, went 1 for 2 with a walk, but could barely jog on his injured leg. After ripping the ball down the line in the fifth, Canzone was held to a single and Matt Carpenter pinch ran for him.

Carpenter stole second base and reached third on an error by Purdue catcher Tyler Cropley attempting to throw him out. Foppe stepped in and delivered an RBI single to right field, plating Carpenter and extending the Buckeyes’ lead to 2-0.

The Hawkeyes threatened in the bottom of the seventh inning when Feltner allowed the first two batters to reach base. The 6-foot-4 junior walked Tyler Crowl and then committed an error on a bunt by Justin Jenkins. Kinker relieved Feltner, struck out pinch-hitter Trenton Wallace and forced Mitchell Boe to ground into an inning-ending double play.

Feltner did not allow a run on three hits and three walks with six strikeouts in six innings. The Hudson, Ohio, native was effective on the hill, commanding his fastball and putting the Scarlet and Gray in a good position to win.

Kinker closed the door on the Hawkeyes, striking out three and allowing just one hit in a three-inning save. The 6-1, 205-pound senior said he was proud of Feltner going six strong innings after he’s had tough luck as of late.

“I just tip my cap to (Feltner),” Kinker said. “Because he put us in a great position to win the ballgame today, and I had to do my thing in the seventh.”

When asked about the team’s expectations advancing in the tournament, Kinker expressed his belief in his team to never give up.

“The whole mentality the whole year — we’re grinders — we grind every single game,” Kinker said. “We’ve had a lot of games where we’ve been down and we’ve come back late. And that’s the big thing. And I love this team for that reason. Don’t ever count us out.”