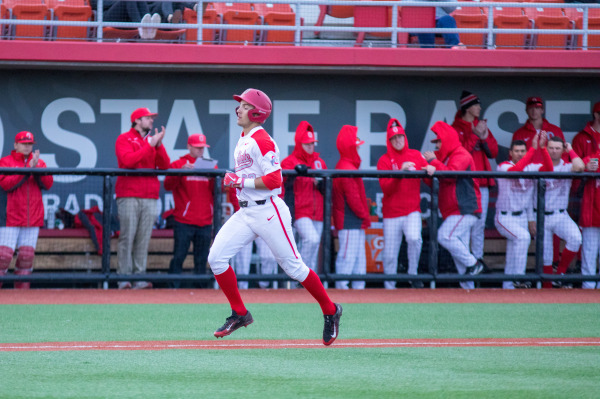 The No. 7-seeded Ohio State baseball team fell to No. 2-seeded Purdue 8-2 in the opening round of the Big Ten Tournament on Wednesday afternoon at TD Ameritrade Park in Omaha, Neb.

Purdue starter Tanner Andrews shut down Ohio State after the first inning, and the Boilermakers produced eight unanswered runs for the victory. The 6-foot-3 starter pitched a complete game, allowing just two runs on six hits, one walk and one hit batter with seven strikeouts.

Harry Shipley and Evan Warden helped lead the way at the plate for Purdue, hitting 2 for 5 with five runs batted in, and 2 for 3 with two runs scored and one RBI, respectively.

Tyler Cowles stood out for the Buckeyes, hitting 2 for 4 with two RBI and throwing a runner out at the plate from left field.

The Buckeyes took a 2-0 lead in the top of the first inning on a two-out RBI double by Cowles, scoring Kobie Foppe and Conner Pohl. Dillon Dingler hit an infield single up the middle and Cowles attempted to score from second base on the throw to first, but was thrown out at the plate by Jacson McGowan.

The Boilermakers threatened in the bottom half when Nick Dalesandro drew a walk and reached third on a Skyler Hunter single up the middle. With one out and runners on the corners, Ohio State starter Connor Curlis struck out McGowan for the second out and catcher Jacob Barnwell picked off Dalesandro at third to end the inning.

Warden led off the bottom of the third for Purdue with a double to left field. Tyler Powers followed him with a single to right field. Shipley hit an RBI groundout to second, scoring Warden. Dalesandro hit a single to center and Dingler misplayed the ball, allowing Powers to score and Dalesandro to reach third. Hunter hit a fly ball to left field and Cowles gunned Dalesandro out at home for an inning-ending double play.

Purdue took a 3-2 lead in the bottom of the fifth on an RBI single by Shipley, scoring Alec Olund. With one out and speed on the corners, Dalesandro lined into an unassisted double play by Bo Coolen at first base.

After Hunter and McGowan reached on a single and walk, respectively, Ohio State right hander Kyle Michalik relieved Curlis with no outs in the bottom of the sixth. Following a sacrifice bunt and intentional walk, Olund reached on a fielder’s choice, plating Hunter. Warden laced an RBI single to left center, scoring McGowan. Powers drew a walk to load the bases and Shipley hit a bases-clearing double to extend the Boilermakers’ lead to 8-2.

Ohio State right hander Yianni Pavlopoulos relieved Michalik to start the seventh and allowed three consecutive singles. However, the fifth-year senior got an infield fly, strikeout and fielder’s choice to end the inning without any damage. Pavlopoulos pitched two innings, allowing three hits and one walk with two strikeouts.

Ohio State will play No. 6-seeded Iowa at 10 a.m. Thursday in an elimination game.