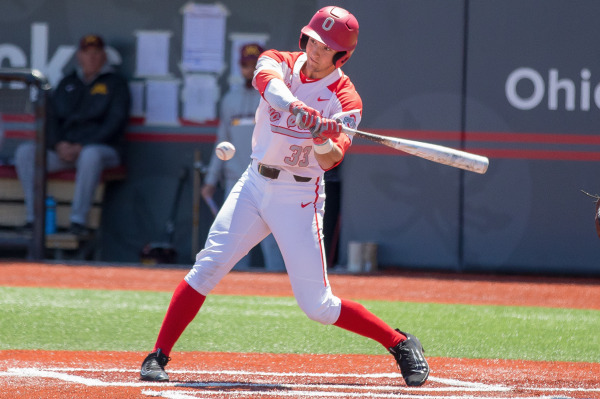 The No. 7-seeded Ohio State baseball team was eliminated by No. 1-seeded Minnesota in an 8-1 loss Saturday in the Big Ten tournament at TD Ameritrade Park in Omaha, Neb.

Minnesota racked up 11 hits compared to just three for Ohio State. The Golden Gophers drew nine walks and the Buckeyes tallied four and one hit batter.

The Golden Gophers had a big day at the plate with multi-hit games from Luke Pettersen, Eli Wilson, Alex Boxwell and Jordan Kozicky. Cole McDevitt, Toby Hanson and Kozicky each had multiple runs batted in as well.

Fredrickson shut down the Buckeyes, making only one mistake through six innings. The Big Ten Freshman of the Year and Big Ten Pitcher of the Year improved to 9-0, allowing one run on two hits, two walks and one hit batter with one strikeout.

Tyler Cowles put the Scarlet and Gray on the board first with a two-out solo home run in the bottom of the first inning, proving to be Fredrickson’s only blunder during his outing.

Ohio State starter Yianni Pavlopoulos allowed baserunners to reach second and third with two outs, but got a ground out to get out of the jam in the top of the second.

With the bases loaded and two outs in the third, Pavlopoulos escaped another scoring threat with help from a snag by Bo Coolen at first base on a Micah Coffey line drive.

Pavlopoulos ran into trouble in the fourth inning, walking McDevitt, allowing Boxwell to single and Kozicky to reach on a bunt single with a misthrow by Conner Pohl at third base.

Left hander Griffan Smith relieved the fifth-year senior with no outs, and Hanson hit a sacrifice fly to center field scoring McDevitt. The freshman reliever forced another fly out and struck out Ben Mezzenga to escape the threat with the score tied at 1-1.

Smith avoided another scoring threat by Minnesota in the fifth with runners on first and second and one out. The Cincinnati native struck out McDevitt and forced Boxwell to fly out to end the inning.

The Golden Gophers capitalized in the sixth when Hanson crushed an RBI triple to center field, scoring Kozicky after he had drawn a walk. Luke Pettersen knocked in Hanson with a single to left center, extending Minnesota’s lead to 3-1.

Ohio State right hander Kyle Michalik relieved Smith with no outs and Pettersen on first base. The Brunswick, Ohio, native caught a popped-up sacrifice bunt attempt for the first out. Michalik forced Terrin Vavra to hit a ground ball to second, but Vavra beat out the potential double play after Petterson was out at second.

Vavra stole second and advanced to third on a throwing error by catcher Jacob Barnwell. Michalik walked Wilson and Coffey to load the bases, and McDevitt hit a two-out, two-run single up the middle to push the Minnesota lead to 5-1.

Minnesota added to its lead in the seventh on an RBI groundout by Vavra, plating Hanson to make it 8-1.

Ohio State right hander Jake Vance threw two scoreless innings with three strikeouts to finish the game on the hill for the Buckeyes.

Cowles stood out again for Ohio State, producing the team’s only run and drawing two walks. The senior from Grove City, Ohio, hit .385 (5 for 13) with one home run, three doubles, three walks and drove in six of the Buckeyes’ 10 runs in the tournament.